Respect in "The Greatest Game Of Them All" Four quarterbacks and two linemen would not make a winning lineup on the field. Yet six men who played those positions and now head up the coaching staffs at Brown, Dartmouth, UConn, Boston College, UMass, and Maine made a powerful lineup at Fenway Park for a panel focused on the future of football and how football builds character. While the schools will compete hard against one another at Fenway in November, on a rainy, windy Tuesday in April, the six men came together to support Positive Coaching Alliance-New England.

United by love for the game of football, Steve Addazio, Randy Edsall, Phil Estes, Joe Harasymiak, Buddy Teevens, and Mark Whipple demonstrated a commitment to coaching athletes with respect and positivity, and showed respect for the game, for one another, and for every athlete in the room. 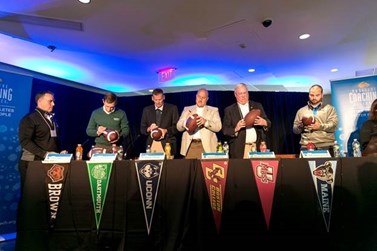 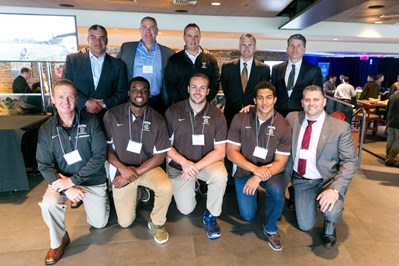 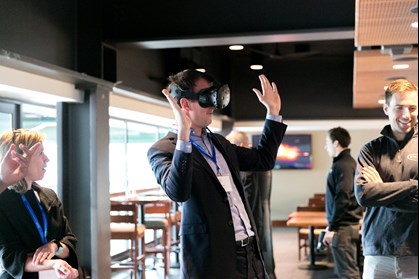 Wasserman explained two of the benefits of VR--enabling coaches to experience what their athletes are experiencing and helping players increase their reps even when recovering from hard training or injury. In the Red Sox Home Run Derby VR competition, there were some hits, some whiffs, and, when Gordie Gronkowski swung the virtual bat, a few crushed balls. 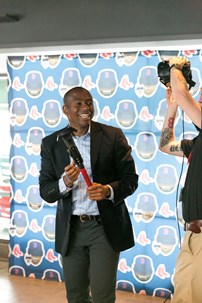 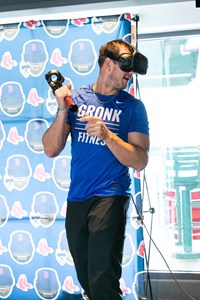 Dodging, weaving, and spinning, Dartmouth’s MVP, described by Coach Buddy Teevens as 5’ 9”, 180 pounds, with a 4.4 time in the 40, was a challenging target. The robotic tackling dummy is aptly named; Coach Teevens values the MVP-Mobile Virtual Player because it “saves bodies,” keeping his team healthy and intact in week nine of the season. 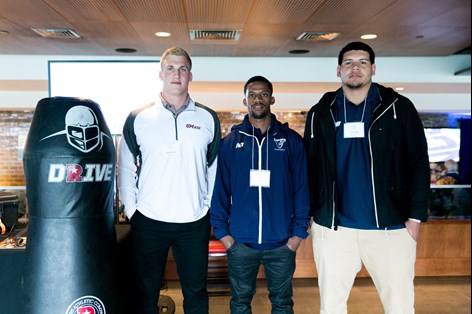 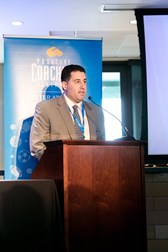 Morey set the tone for the afternoon speaking from the heart about two of his former coaches, Coaches Estes and Whipple, and the ups and downs of his NFL experience, while praising former Harvard football players and PCA National Advisory Board Members Chris Nowinski and Isaiah Kacyvenski (noting his record-breaking number of tackles at Harvard and his NFL career) and, and admiring Gordie Gronkowski’s athleticism. Morey highlighted the importance of coaching positively, quoting one of his former coaches who said “the difference between a pat on the back and a kick in the butt is about 18 inches.” 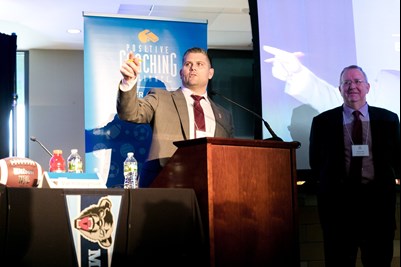 The 6 coach panel demonstrated that the bonds that form between football players are strong, apparently unbreakable. The coaches remained respectful and resisted attempts to stir them up, all the while sharing clear and important messages. Here are a few of them:

Patriots Super Bowl champion James Develin (Brown ‘10) exemplifies “what Brown football is all about,” according to Coach Phil Estes who praised Develin’s “work ethic, humility, and commitment to do his very best at whatever is asked of him.” An example of true commitment, Estes said Develin never missed a practice or a game while he was at Brown.

UConn Coach Randy Edsall appreciated the lessons of “hard work, discipline, and especially accountability” that he learned from his father, and from his coaches at every level, high school, college, and beyond. 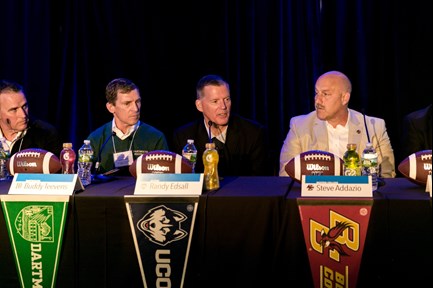 Boston College Coach Steve Addazio looks for “leadership and character” because he wants “a great locker room, a bunch of like-minded guys.” He doesn’t chase his student-athletes to class, he expects them to go to class. 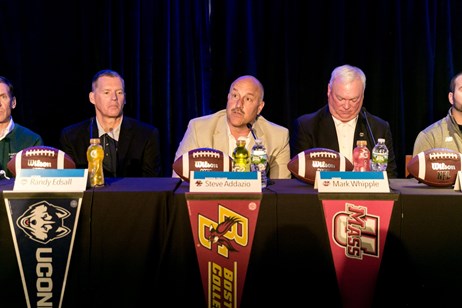 Dartmouth’s Teevens said he looks for players who are “great football players at football time, great students at academic time, and great guys all the time.”

As for social media, Addazio doesn’t like it, he would rather get on the phone with a recruit and gauge who they are as a person, but his staff will check all of a recruit’s social media.

Teevens’ social media rules are “very simple: don’t embarrass yourself, your family, or the football program. If something pops up, we send it to mom.” 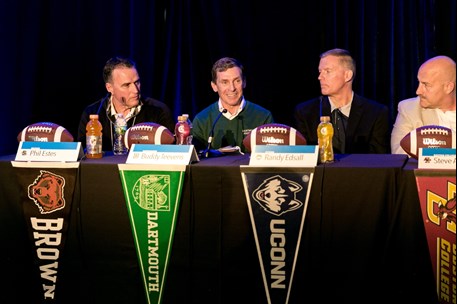 Checking recruits’ social media is something all the programs do.

3. For Young Players Entering the “Greatest Game Of Them All” Safety, Fundamentals, and Positive Sports Experiences Are Essential

In response to Chris Nowinski’s question about the right age to begin tackle football, Coaches Estes and Teevens both urged a later start than is common among their players.

Edsall highlighted the importance of teaching young athletes the fundamentals, and praised PCA for teaching that football is not just about winning. Edsall described football as “the greatest game of them all because of what it teaches and what it stands for.” Edsall made the extra effort to see that his son did not have a bad experience so he could grow and love the game too—which he does. Corey Edsall coaches with his father at UConn now. 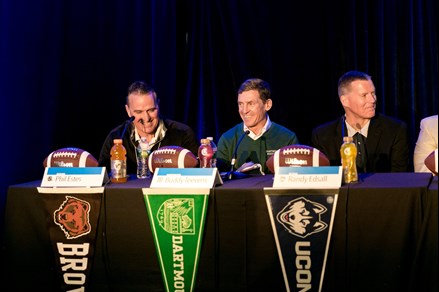 UMass’ Mark Whipple valued his experience playing both football and baseball and urged young athletes to “play multiple sports, and be introduced to as many opportunities as possible.” 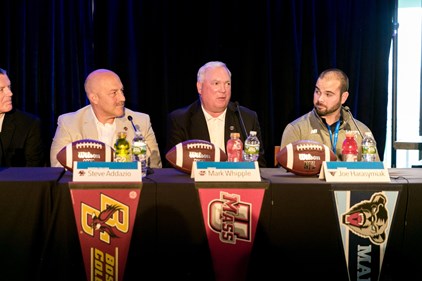 Teevens’ high school coach, John Montosi, was, in Teevens’ words ,“tough, physical, demanding, but he always said something nice before you left the field, you felt good about yourself.”

Estes’ father, “my positive,” taught him all about hard work, and doing things the right way.

Addazio honored his Little League coach who “gave me the ability to believe in myself” and whose positivity Addazio believes really impacted him from a young age. Reflecting, Addazio noted “maybe I need to do a better job of that.”

Whipple recalled his first trip to Fenway, and appreciated his mother and his father because they “made it possible for me to play college football and baseball.”

Maine Coach Joe Harasymiak credited his predecessor Jack Cosgrove, Maine’s head coach for 23 years now a Senior Associate Director of Athletics at Maine, with “trusting him, instilling in him the program’s value system, and teaching him how it is special to be a Maine guy.” 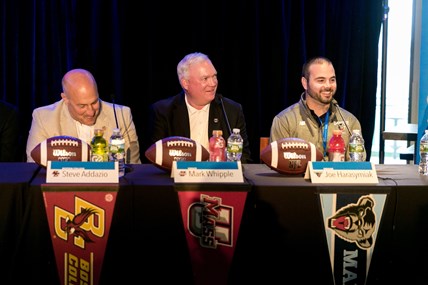 Elevating Self, Teammates, and the Game 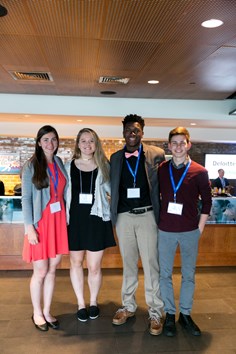 PCA awarded Triple-Impact Competitor® Scholarships to four high school students, Mackenzie Buzzell of Fryeburg Academy, Abigail Dirks of Pingree, Tavyen Matthews of Simsbury, and Cam Wade of North Reading. Believing that “what gets rewarded gets repeated,” PCA honored these student-athletes who elevate themselves, their teammates, and the game. Matthews shared his journey from Atlanta to Simsbury as part of the A Better Chance program, and the new perspective sports has given him that it is important to put others first, to set an example, and to encourage those younger than yourself.

An Auction and Many Thanks 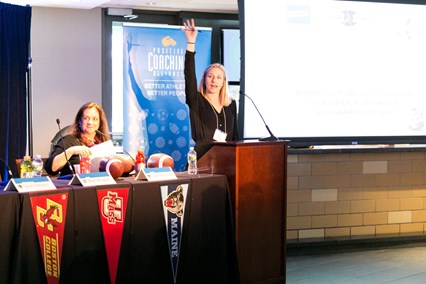 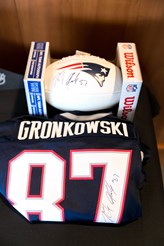 The afternoon concluded with many thanks from PCA to its sponsors and supporters as the coaches and their student-athletes moved on to a press conference and others left slowly, some with Gronk-signed gear, and the rest with Gatorade and goodwill. 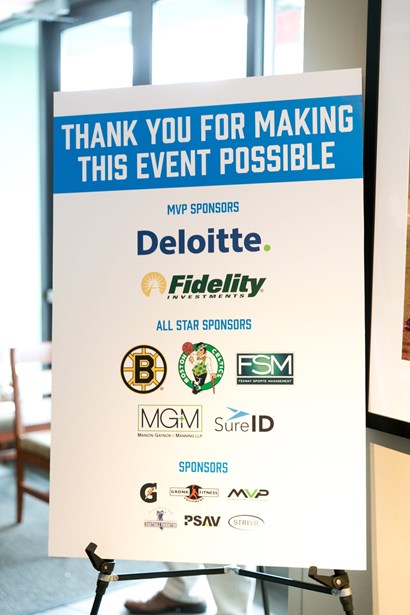