Philanthropic gifts of time, talent and treasure are key to PCA achieving its mission of developing Better Athletes, Better People through youth and high school sports. Among our greatest givers in all three of those areas are members of PCA’s National Board of Directors, Chapter Boards and Leadership Council. Foundations also are a tremendous source of financial support, especially in bringing PCA to underserved communities, as well as intellectual capital. We are deeply grateful for these gifts and how they help PCA impact our nation’s youth.

These profiles highlight the individuals and organizations that have appeared in our Impact e-newsletter for PCA donors. We are deeply grateful for their and your support. We cannot accomplish our mission to use sports to develop Better Athletes, Better People without it! 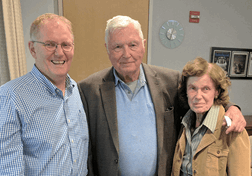 Pitch Johnson (pictured middle with wife Cathie) is active in Asset Management Company, the firm he started in 1965. Pitch and his wife Catherine have been long-time supporters of Positive Coaching Alliance. In this recent interview, PCA CEO Jim Thompson explores Pitch’s thoughts about a range of things including sports and business.

Warren Lichtenstein (pictured here with National Advisory Board Member Julie Foudy) is Chairman and CEO of Steel Partners. When his son started playing sports, he realized there was a huge opportunity to make a difference in youth sports and he founded Steel Sports and added it to the Steel Partners portfolio of companies. He provided the initial Seed Funding for both the PCA-Los Angeles Chapter (which launched in June 2015) and the PCA-New York City Chapter (which launched January 2016). Jim Thompson interviewed Warren for Impact on March 21, 2016.

Rodger Rickard has been a star athlete, a successful coach, athletic director and educator who earned a PhD in education from Stanford University. Leaving education he went on to become one of the most successful business people in Silicon Valley's real estate market. But he was just getting started. He then became an entrepreneur who helped make the University of Phoenix a huge success by focusing on the needs of "the most neglected part of American education—the working adult." He initially reacted negatively when told he was a "salesman," but came to embrace that role after he realized that "sales people can change the world."

Rodger met PCA Founder Jim Thompson in a memorable meeting at Stanford in 1998. Initially he thought that Thompson was crazy (and told him so!). But Rodger was so in tune to the principles of Positive Coaching (which he embodied in his own coaching) that he couldn't stay away. He quickly became an early and avid supporter and National Board Member of PCA. He helped raise seed funding for PCA-Cleveland and has shared his sales wisdom with PCA staff responsible for "selling" our program to schools and youth sports organizations.

This interview with Jim Thompson which took place at Buck's Restaurant, a Silicon Valley "power lunch" spot in Portola Valley on September 29, 2015, described his amazing life experiences that led him to become such an important PCA supporter.

Daniels Fund, named for the late philanthropist Bill Daniels, is a major supporter of PCA. The foundation provided the seed funding for PCA-Colorado and in 2015 pledged a $2-million gift to our Growth Campaign to help PCA expand to 26 Chapters and impact 20 million youth by the year 2020. In this interview by PCA Founder Jim Thompson of Daniels Fund CEO Linda Childears, you will learn how a coach impacted Bill Daniels’ life, putting him onto a path that impacted millions of other lives.

PCA has been fortunate to have Deloitte as a strong partner since 2007. Here is PCA Founder Jim Thompson's interview of two key Deloitte executives who fuel our partnership: Mark Edmunds and Teresa Briggs. Both are instrumental in our annual National Youth Sports Awards Dinner and Auction Sponsored by Deloitte and in our Triple-Impact Competitor® Scholarship Program Sponsored by Deloitte. The interview explores the origin of Deloitte's support for PCA and the personal experiences and values that both Briggs and Edmunds bring to our work together. The result is uncommonly clear reflection on how youth sports experiences shape people into productive, contributing members of society and team players in contests much more important than sports.

Troy Fowler of Triad Foundation has been a key PCA supporter, especially in the Tampa Bay area. He led Triad Foundation's backing of a multi-year PCA partnership with the area's Hillsborough County School District, which has trained hundreds of coaches and student-athletes. Under Troy's leadership, Triad Foundation also provided seed-funding for the 2014 launch of the PCA-Tampa Bay Chapter. Learn more about Troy and his commitment to PCA in this interview with PCA Founder Jim Thompson.

Dan Whalen (left, with wife Katharine) is an original member of PCA's Board of Directors. He remains active with PCA 15 years later. In this interview with PCA Founder Jim Thompson, Dan discusses the importance of grit -- passion and perseverance for a long-term goal -- and a sense of humor.

As you'll learn, Dan has exhibited both traits throughout his own business career and in his ongoing support for PCA. The interview also explains why Dan used to give his employees mirrors and magic wands...and how that spirited approach to business and interpersonal relationships has helped shape the PCA Movement.

Houston-based philanthropist Bob Graham has been a driving force in the success of PCA-Houston and now has committed funds to PCA's Growth Capital Campaign. In this interview with PCA Founder Jim Thompson, Bob explains his enthusiasm for the PCA Movement.

Tom Lewis - Founder and CEO of the homebuilder T.W. Lewis Company - is the philanthropist whose T.W. Lewis Foundation provided seed funding for PCA-Phoenix. His business success stems from core values and life lessons learned through sports, and as he says in this interview, "I don't know that I've ever been as excited about being involved with a non-profit as I am with PCA."

The S. D. Bechtel, Jr. Foundation has played a pivotal role in PCA's ability to expand rapidly across the country over the past three years. In this interview of Foundation Program Officer Marcia Argyris and CFO Pat Leicher (pictured with PCA Trainer Joe Thomas), they explain the foundation's commitment to character development, how its focus on organizational sustainability plays out in the grants it makes and why they are enthusiastic about their work with PCA.

David Weekley, Chairman of David Weekley Homes, explains why he supports PCA in this interview. David has backed the launch of PCA Chapters in New England, Chicago, Houston, North Texas and Sacramento and provided huge support of PCA's five-year Growth Capital Campaign. David helped originate and fund our Talking Points series of free weekly e-mails for coaches, was a driving force -- along with Bob Graham -- behind the Houston Tipping Point Project that trained thousands of Houston-area youth sports coaches and piloted a new PCA signage program in Houston.