Play On: Girls in the Game 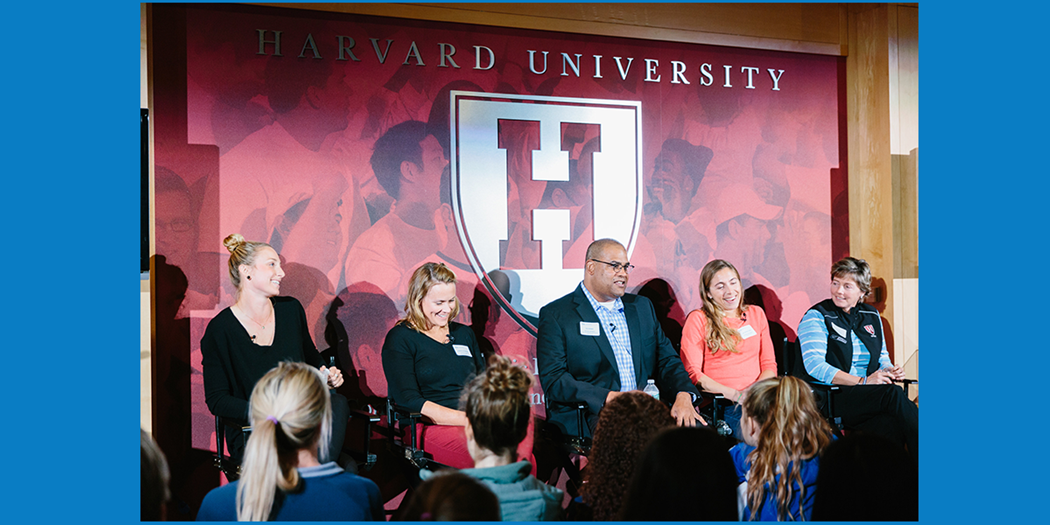 Under an antique wooden crew boat suspended from the airy ceiling, and facing a wall covered floor-to-ceiling in images, plaques, and the inspirational stories of Harvard University athletes, some 90 people gathered on Thursday, November 10th to celebrate and discuss the importance of getting and keeping girls in sports at an event titled Play On: Girls in the Game presented by Positive Coaching Alliance (PCA) and Harvard University. The event began with a lovely and lively reception for the group of female athletes, their coaches, parents, and supporters, as well as male and female businesspeople who support girls and women in sports.

The Executive Director of PCA’s New England chapter, Beth O’Neill Maloney, opened the conversation with the words of pioneering author, speaker, and former Stanford University and professional basketball player Mariah Burton Nelson: “Think of yourself as an athlete, I guarantee you it will change the way you walk, the way you work, and the decisions you make about leadership, teamwork, and success.”

Citing research from the 1970s to the present published by the Women’s Sports Foundation and Ernst & Young, Maloney explained that girls in sports are happier, healthier, and more successful in reaching their goals. She recited powerful statistics, including that more than half the women in America's C-suites played sports and that girls in sports have reduced rates of teen pregnancy, breast cancer, depression, and suicide, and encouraged girls to play on. Maloney also shared PCA’s new video, The Power of Positive, in which top athletes and coaches, ranging from Billie Jean King to Brad Stevens and Claude Julien, express their commitment to the power of positive coaching to improve athletic performance and to develop character, because when athletes feel their coaches believe in them, they begin to believe in themselves.

Tracy Jones, Athletic Director of the Bancroft School in Worcester and an experienced PCA trainer, was the evening’s moderator. She interviewed the five panelists about how sports shaped them as people, and how sports empower girls and women. The panelists were Executive Director and founder of Shooting Touch and G3 Boston, Lindsey Kittredge; Harvard Women's and Men's Water Polo Coach Ted Minnis; Rio Olympic silver medalist Gevvie Stone; Harvard Women's Ice Hockey Head Coach and US Olympic coach Katey Stone; and, filling in for the Breakers’ Cat Whitehill, former Boston Breaker and University of North Carolina soccer player Rachel Wood. The panel touched on a number of topics, such as how their sports experiences shaped them as people, how they tackle body image challenges, how handling negative feedback and adversity in sports helps in life, how coaching male and female athletes differs, and finally, how important sports are to life.

A few of the highlights:

Katey Stone related that, as a young girl she studied her father coaching his teams—never swearing and never demeaning his players—and that “helped make me the person I am today.” Stone shared the importance of encouraging female athletes to “fuel” their bodies for success and to understand “that the only thing that matters is what you think about you…we spend a lot of time talking to players about being proud of their body, and of their accomplishments.”

Dr. Gevvie Stone shared her unique experience balancing medical school and Olympic training telling the audience of young athletes, their parents, coaches, and supporters that “being an athlete has taught me unspeakable volumes about how to respond to feedback. When you get negative or critical feedback, it’s it all about using it as a means to make you stronger.” Like Billie Jean King who famously said that “pressure is a privilege,” Stone encouraged girls to “stay focused on the process and reaching your own achievable goals, you end up having the most fun in the moments of highest stress.” Dr. Stone’s advice to her younger self, and the girls in the room, was to “stay balanced. Find the high in the lowest points, and the low in the highest points.”

Ted Minnis explained how coaching girls and women made him a better communicator and a better coach of both women and men. Minnis explained that “a key difference between coaching women and men is that men tend to believe they already know as much as they need to know, whereas women will be willing to run through a brick wall for you as a coach. The trick is, you must be able to explain, clearly and succinctly, why you want them to run through that brick wall.”

Rachel Wood shared how she has learned to maintain her confidence and courage in response to adversity, whether that adversity was negative coaching or a challenging medical diagnosis. She also explained that it is important to understand that “sports is what I do, not who I am.” Wood understands that while sports shapes your character, your self-worth is not defined by your skill level. Her comments echoed those of many in PCA’s Power of Positive video, including Billie Jean King, who proclaims that “it does not matter whether you are ranked #250,000 or #1 in the world, we care about you as a person.” Wood also addressed body image issues, sharing that her “biggest source of self-consciousness has often been my thighs, but as a soccer player I’ve come to think of them not in a negative light, but positively in that they are what’s carried me to the success I’ve had in life. I would not be the accomplished player I am today if not for my thighs; they are my best friends.”

Lindsey Kittredge, in response to a question about what advice she would give to her younger self, counseled, “Treat sports as an essential part of life. Playing is medicine, as necessary to the body as water.”