Monthly Motivations: In Us We Trust

Much already has been and still will be written about the 2017 Cleveland Indians' historic winning streak, which reached 22 games. Of all the mind-blowing facts and figures that have been used to put this streak into context; such as the fact the team has hit more home runs than total runs allowed and has only trailed in five (5) of the last 189 total innings they've played, I'd like to offer one more number that I believe is truly amazing and provides some insight into what makes this team and stretch so special: 18 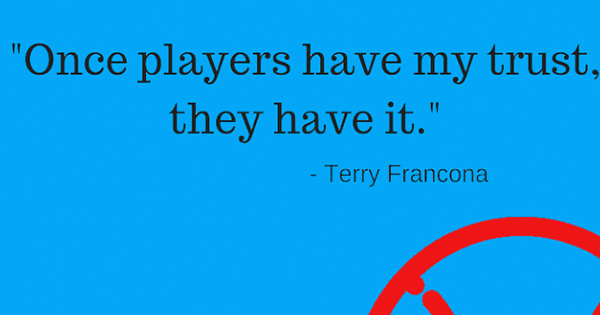 That's the number of players that have started a game during the Indians' 22-game winning streak. Literally every position player who has been healthy and available during the streak has started at least one game.

Baseball players are well-known for their superstitions and reluctance to interrupt routines at the risk of jinxing hot streaks. The old adage, "If it ain't broke, don't fix it." probably guides many of us in our decisions related to our work and life. So it might surprise you to learn that Terry Francona didn't use the same batting order once during the streak.

How is that possible? Some might wonder how the manager of a Major League Baseball team could risk losing a game in the midst of a once-in-a-lifetime winning streak to get some "other guys" playing time - including some guys making their MLB debuts!?!?!

Others might wonder how it's possible that a team continues to win despite the fact everyone truly is getting a chance to play?

It's a Matter of Trust

Back in 2014, when Positive Coaching Alliance launched our Cleveland chapter, we had the opportunity to talk to Terry Francona about his relationship with his players, and when you listen to his response to event moderator, FOX SportsTime Ohio's Matt Underwood, you start to get an idea of how all this has been possible three years later.

My own personal philosophy...I want our players to feel like we care about them more than anybody's ever cared about them before. But at the same time we're asking more of them than anybody has ever of them asked before.

Last year, our Cleveland chapter of Positive Coaching Alliance had the opportunity to have a conversation with some of the Indians' front-office staff and these comments from now Assistant General Manager, Carter Hawkins, seem to play off Francona's comments about the importance of connecting with each player and how that builds a culture of trust.

During the winning streak, this culture of trust within the Indians organization was on full display. Not only did Francona and his staff clearly demonstrate that they believe in the players on their roster and their collective ability to contribute to winning, but that trust clearly extends from the players toward Francona and their teammates.

Think about it. During this streak not a single complaint has been uttered publicly from players wanting more playing time, playing "out of position", or getting pulled out of the lineup to give other guys a chance. How often does that happen in professional sports? Or even Little League?

There might be a lesson there for all of us.

Another big reason why this incredible winning streak lasted as long as it did  - despite the fact so many different guys have been able to contribute - is because this team is so focused on staying in the moment. At Positive Coaching Alliance we talk about a principle called the ELM Tree of Mastery where competitors only concern themselves with the things they can control: their own effort, what they learn from a situation, and how they respond to mistakes and setbacks. Athletes that take a mastery approach to their craft are better able to block out distractions and variables over which they have little control: such as winning streaks.

And here are just a few more examples of comments by players Corey Kluber and Francisco Lindor that demonstrate this team's mentality and focus and effort to truly stay in the moment.

Of all that has been and will be said about this team, what I know I'm going to appreciate the most comes down to the way in which this organization has shown the world how a culture that promotes trust in one another and trust in a process that leads to success can drive incredible performance.

I'm grateful for the partnership and support that the Cleveland Indians have provided to our Cleveland Chapter of Positive Coaching Alliance...and I'm grateful this moment is happening in my lifetime and I get the opportunity to witness how the strength of relationships, character, discipline, teamwork and trust can lead to success on the baseball field - and to then have the chance to share lessons learned from this experience in my role as a coach and as a parent and apply them to my own life and career.

Congratulations to the entire Indians organization, thank you for an incredible summer, and looking forward to another fall of post-season baseball in Cleveland. Go Tribe!