Coffee with the Coaches Event Highlights

Our Third Annual Coffee with the Coaches presented by Insperity – May 27 at the Hall of Fame at Globe Life Park in Arlington – celebrated some of the best in North Texas sports. The featured attraction was a discussion with Rangers Manager Jeff Banister and college, pro and Olympic softball star Cat Osterman.

Moderated by FOX Sports Southwest’s Erin Hartigan, the conversation shared secrets of success at the top level of sports that also work at the youth and high school levels. For example, said Osterman: “If you want athletes to care, then you have to show them that you care about them.” 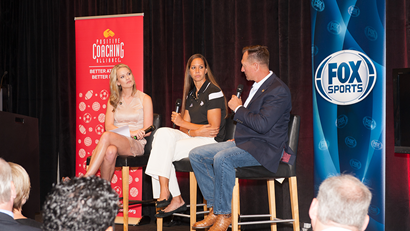 Banister shared his personal mantra – #NeverEverQuit – and explained that coaching at any level is more than just about what to teach players on the field. “Athletes wonder two things with their coach: ‘Do you care about me? And can you help me get to the next level?’ They want you to stand by them in good times and bad times and care about them all along the way.”

The national FOX Sports Supports partnership with PCA was on display before, during and after the event in the form of promotional public service announcements, Hartigan’s role on-stage and post-event coverage in a segment of the Rangers’ post-game TV show that night.

“We were thrilled with this event,” said PCA-North Texas Chapter Executive Director Danielle Moorman. “We continue to draw inspiration from our award-winning coaches and student-athletes. Jeff Banister, Cat Osterman and Erin Hartigan together were riveting. We appreciate the great contribution to the event’s success from FOX Sports Supports, Insperity and the Rangers’ Joe Januszewski. We also were proud to welcome our partners in developing ‘Better Athletes, Better People’ throughout North Texas, such as Dallas ISD’s Gil Garza and Brad Burns, Fort Worth ISD’s Kevin Greene, and Lee Jackson from Mercy Street.”