Out of over 600 nominations, Adams was one of 25 national recipients of the Double-Goal Coach® award presented by TeamSnap, named for coaches who strive to win while also pursuing the more important goal of teaching life lessons through sports. After a lengthy review process that included a final review committee made up of TeamSnap Founder, Dave DuPont, Coaching Corps CEO, Janet Carter, Cal Rugby Coach Jack Clark, 2020 Coach of the Year DeVon Holmes, Nike’s Caitlin Morris, Dick’s Sports Goods’ Aimee Watters, Taube Philanthropies’ Dana Blecher, Pixellot’s David Shapiro and Davis Polk & Wardwell’s Phil Sheng, Adams’ story rose to the top because of his impact on his team, school and community.

Thanks to the generosity of the Taube Family Foundation, Adams will receive the $10,000 Taube Family Prize in Recognition of Excellence in Coaching. $2,500 will go directly to Adams and $7,500 will go to Minneapolis North Community High School Football Program.

Adams and the other 24 National Winners, in addition to the 75 Regional Winners were all recognized on Sunday, April 18th at PCA’s first-ever virtual National Youth Sports Awards and Benefit. 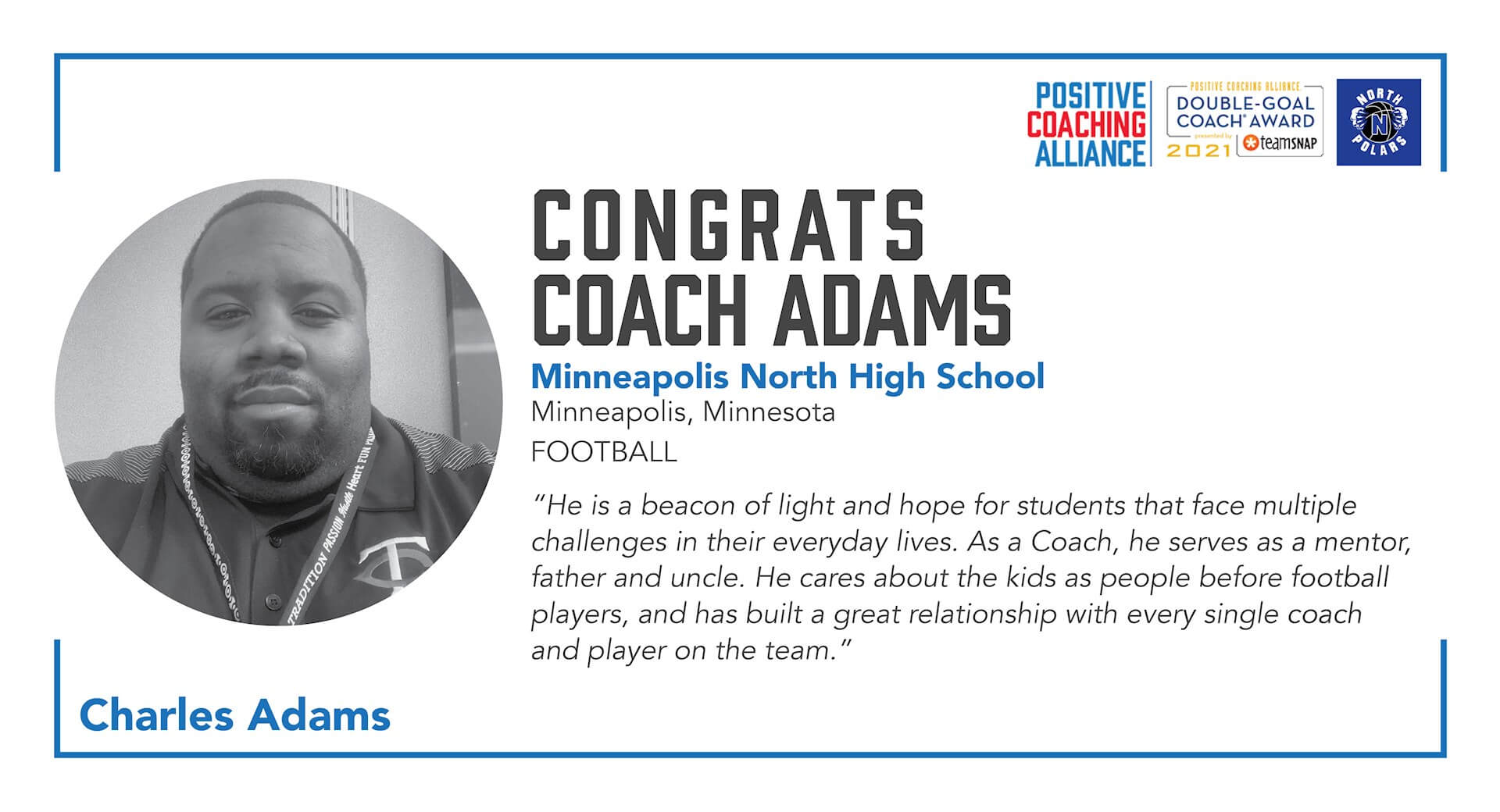 With over 2,000 registered guests, and sports celebrities including Stephen Curry, Derek Jeter, NBA Commissioner Adam Silver, and WNBA commissioner Cathy Engelbert participating to honor the coach award winners and celebrate the many accomplishments made through sports during this last, very challenging year, the event shined a light on all that is right in sports. Registered guests represented all 50 states.

“Coach Adams helps athletes win in and out of sports,” said Chris Moore, CEO of Positive Coaching Alliance. “By creating a positive, character-building youth sports experience and serving as a Double-Goal Coach, he helps youth develop into better athletes and better people.”

Charles Adams III grew up in Minneapolis and attended the high school where he now coaches. As a MNCHS “Polar”, he knows the struggles of this community and this school first hand and came back to help the youth find a better path forward.  He followed in the footsteps of his father, Charlie Adams, as a Minneapolis Police Officer and at one point served at MNCHS as the School Resource Officer until the position was removed by the Minneapolis School Board. Adams was back on patrol and serving his community on the front lines during the riots and social unrest in the community this past summer following the death of George Floyd.

The youth on his team and within his school and community all rely on Adams to provide more than just the skills involved with coaching. They see him as a father figure, mentor, role model and so much more, in addition to being their coach. He is known throughout the community for his positive attitude and a big smile, always lending a helping hand and trying to improve the lives of those around him. During this particularly challenging summer, he was a calming influence and sounding board for his players as they worked through all they were seeing and experiencing.

Nominated for the award by MNCHS Athletic Director, Kale Severson, who shared that Adams is “steadfast in his commitment to North Community High School and football. He went on to say that “I believe Coach Adams’ commitment to our students, families, and school was instilled in him as a young man [who] attended and graduated from North Community High School.”  Additionally, references were provided to support the nomination by Severson and that support came from administrators, parents, and players alike.

Assistant District Director of Athletics, Dave Wicker, who provided a reference for the nomination, relayed that Adams, “saved MNCHS from near extinction (the school was on the verge of being closed), turning it into a perennial state power through extreme service to the entire school community. Additionally, he said that Adams, “has an energetic, hardworking personality that is always looking out for the best interest of students and staff. He is well known and respected by all community stakeholders and throughout the state. Minneapolis Public Schools are fortunate to have him as an integral part of our athletic program.”

Coach Adams fills the emotional tanks of his players day in and day out through the positive interactions he has with them and the role he plays in their lives. He coaches more than just football players. They are young men who he builds lasting relationships with and it is clear that he cares about so much more than just their participation on his football team as he advocates for their success in academics, at home, and beyond.

Adams retired in 2020 after 20 years of service to the Minneapolis Police Force and is now Director of Team Security for the Minnesota Twins Baseball Franchise.

As a catalyst for a positive youth sports culture, Positive Coaching Alliance provides research-based training and resources for coaches, parents, athletes, and leaders to ensure a positive youth development experience for ALL kids, in all communities across the U.S., through sports. PCA ensures sports are ‘done right’ with programming that is research-based and designed to have an impact at three levels in a youth sports organization or school:

PCA believes that all youth can benefit from a positive, inclusive sports culture that develops social and emotional skills, molds character, and prepares them for competition and life. In more than two decades of work, PCA expanded from a small local nonprofit to a strong, nationwide organization that provides programming in all 50 states, reaching thousands of organizations around the country and positively impacting millions of youth athletes every year. PCA has now partnered with roughly 3,500 schools and youth sports organizations nationwide to deliver more than 20,000 live group workshops, reaching over 20 million youth. Phil Jackson, Doc Rivers, Herm Edwards and other top coaches and athletes help you create a team culture of excellence. Specific sections of the course focus on how to create dynamic practices and strategies for getting the most from your athletes – as players and as people -- before, during and after the game.