My Experience at the Jr. Lakers Workshop

My name is Rashaad Cooper, I’m a Junior at Dartmouth College and a member of the football team. Currently, my teammate, Micah Croom, and me are gaining valuable experience as interns here at PCA-Los Angeles.

On Tuesday, we had the pleasure of accompanying Marti Reed, the Development Manager here at the Los Angeles chapter of PCA, and Coach Ray Lokar, one of PCA’s Head Trainers, for a coaching workshop at the Staples Center before the Lakers played the Suns. What better place to talk about positive coaching than the home of some of the greatest basketball coaches and players of all time? The workshop was filled by passionate coaches who were eager to learn how they could maximize their players’ experience as well as production under their leadership. 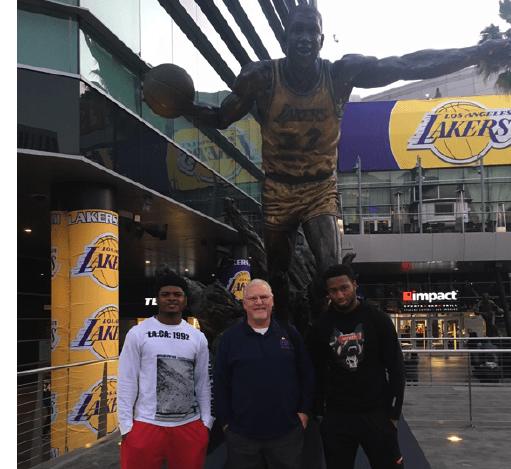 The point of emphasis for the workshop was the importance of keeping players motivated with full emotional tanks. Coach Ray Lokar, who led the workshop, cited a quote from Greg Popovich that stuck with me: when asked to reflect on why he hadn’t been able to get maximum production out of Lamarcus Alridge when he first joined the Spurs, Popovich replied, “I tried to coach him before I knew him”. This admission by Coach Lokar resonated with the room because everyone knew what it was like to have a coach who dished out criticism to his or her players’ without building up their confidence and trust that he or she genuinely cared about them and their development. Across discussion tables throughout the room, it was agreed that letting someone know you have faith in them can do extraordinary things for their performance. When asked to discuss what they would say to their teams during big moments, all of the coaches’ responses had to do with managing emotions and not with the details of the sport. We also talked about how to consider the team’s vibe in preparation for practices. In the end, the coaches left the workshop more knowledgeable and aware about how to keep their players motivated by guiding them to focus on things they can control: effort, learning, and ability to persist through mistakes and adversity.