Being A Woman in Sports, From PCA Staff Member Maggie Hatcher

Cannot implicitly convert type 'Umbraco.Core.Dynamics.DynamicNull' to 'Umbraco.Core.Models.IPublishedContent'. An explicit conversion exists (are you missing a cast?)

My involvement in sports has prepared me to face the daily struggles of being a woman in society - yes, we have made great strides towards equality, but we still have a long way to go. It has connected me to other women in a way we may not otherwise be connected. It has shown me over and over again that when I set my mind to something, and really put all of my effort and energy towards that goal, I CAN and WILL achieve it. My whole life playing sports was a dress rehearsal for being a hard worker at my job, working together with many different personalities, respecting the various coach-figures in my life, valuing effort, persistence, dedication, and trust. It has prepared me to be the best possible coach to high school-aged girls. It has prepared me to be a role model for all the young people in my life. Most of all, it has equipped me with the necessary skills to be a mother. As a woman, I will forever be grateful for the plethora of tools sports has provided me. 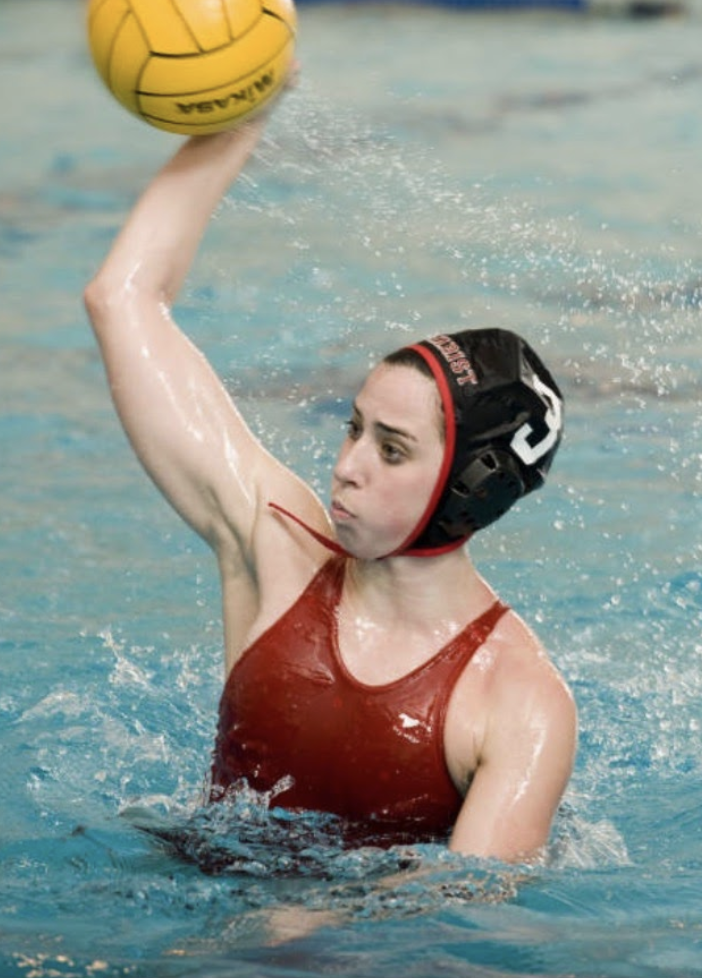 Playing water polo in the Midwest was not common growing up. My sophomore year of high school was the first time the sport was recognized as a varsity sport by IHSA. When I was looking for colleges to continue my playing career, I only had my eyes on the West Coast (the US hub of water polo. At the time, I was a top player in the state and felt pretty confident about my ability and work ethic to make it at the Division I level. I will never forget being in a meeting with the coach of a Southern California school (who shall remain nameless) and being told "it's not your fault you don't have as much experience as these girls, but you just won't make it - they've been playing for years already." My dad can attest to my eye-rolling restraint at this statement - it was a miracle I kept my polite face on. After the recruiting process was over, I began my college career at nationally-ranked Long Beach State. This was an adjustment from high school, but I was ready to work. I was on a team with some of the best players I had ever seen and I knew this was where I belonged. 2 years and 2 coaches later, I made the very difficult decision to transfer to a school on the complete opposite coast - Marist College, a Division I school with an automatic bid to NCAA's. (Did I mention qualifying to NCAA's was my dream??) I had a tough Junior season due to a rocky relationship with the coach. We lost in the conference championship and came up just short of a trip to NCAA's. At the end of that season, the coach retired. I was set to have my 4th coach in 4 years - quite an interesting circumstance.

That summer during my training, I decided nothing was going to stop me, no matter who this final coach was - I was going to come into that season prepared in every way. I swam harder than I have before, lifted weights with more purpose and found any and every possible opportunity to play water polo. By the time school started, I was READY. One of my favorite sayings is “when the student is ready, the teacher appears.” After meeting and working with the coach, I knew this was the teacher that would change my life. She believed in me and saw my effort at each practice. She gave me the confidence to play my game, without fear of making a mistake or getting reprimanded. I trusted her and she trusted me. Things were looking up! In the middle of October, during a pre-season scrimmage, I shot the ball and immediately felt pain in my arm. The follow through of my shot hit my teammate’s hand, breaking and dislocating the knuckle on the ring finger of my right hand – a painful setback. Even with 6 weeks of no passing, I was on a mission. Mentally, I have never felt more locked in. This hurdle of a broken finger was NOT going to stop me once the season started. My mom and I actually started calling it my “magic finger.” It was going to protect me and bring me luck for the season. At the end of January, it was time. Over the course of that season, I played my heart out. All of the work since I was 14 years old, all of the obstacles and bad experiences I had faced, all of the coaches who told me I wouldn’t make it were paying off! I was grateful for every chance to be in the water and loved every second of it. This Midwestern girl without "enough experience" became nationally ranked. I laughed thinking about that closed-minded California coach seeing my name on that list.

By the end of the season, we were undefeated in Conference and two wins away from NCAA's. I. Was. READY! After a thriller in the semis that went into OT (I don't think our parents and fans were able to breathe that last 6 minutes), we advanced to the championship. We took an early lead, but inevitably the game came down to the wire. We won 7-6; there are few memories I have more vivid than that moment of sheer elation. The little-team-that-could was off to Stanford for NCAA's! There is no feeling like setting and achieving an extremely lofty goal, with many variables outside of your control, but believing in it so hard that it becomes part of you. My senior year, I was unstoppable because I decided it would be so. I finished that season as Defensive Player of the Year, All-Conference, NCAA All-American, and ranked 20th in the nation for goals per game. My greatest accomplishment that year, however, was the sense of pride and self-confidence that came with working really hard and achieving my ultimate goal.