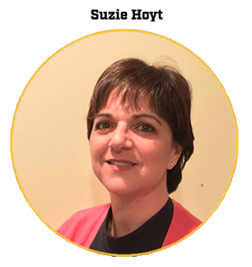 Hoyt is one of 50 national recipients of the Double-Goal Coach award, named for coaches who strive to win while also pursuing the more important goal of teaching life lessons through sports. The award includes a $200 prize, a certificate, and mention within the websites and newsletters of Positive Coaching Alliance (PCA), a national non-profit developing Better Athletes, Better People through youth and high school sports.

Hoyt has been named one of four winners for an all-expenses-paid trip to Palo Alto, CA to participate in a panel discussion on-stage April 22 at PCA’s 16th Annual National Youth Sports Awards Dinner and Benefit Sponsored by Deloitte.

“Suzie helps her athletes win in and out of the pool,” said Beth O’Neill Maloney, Executive Director of PCA-New England, the local Chapter of Positive Coaching Alliance. “By creating a positive, character-building youth sports experience and serving as a Double-Goal Coach, Suzie helps youth develop into better athletes and better people.”

Hoyt, who coaches both boys and girls, has a clear vision of what she wants for and from her team, as well as an artful way of describing those goals. “I want all the kids on the team to not only improve athletically,” she said, “but also to have a deeper appreciation for what it is to be a part of something bigger than themselves and to learn to apply all their hard work to every part of their lives.

“For example, should they decide not to work in practice, it affects everyone on the relay team. I try to impress upon them the image of a puzzle. Some puzzles have a lot of green grass and blue sky, but there will be the occasional yellow flower or red balloon, which stand out more. But if one piece is missing, it doesn’t matter which one, and you immediately notice it. That’s how I explain to my kids that everyone has a role to play.”

Hoyt brings life lessons to life with similar aplomb. She explains logically how trust issues occur when three swimmers in a relay work hard and the fourth does not. Once her swimmers understand that equation, she poses the question about how much athletes can trust themselves if they know deep down they have under-prepared, and she draws an analogy to classroom preparation.

“I’m not a yeller,” she explained. “If I do raise my voice, there is deathly silence in the pool. We ask, ‘How would you feel if…’ I make the kids reflect on their decisions. I remind them they are all incredibly intelligent people, and they should make intelligent decisions every single day, because those decisions affect every single person here. If you’re going to do something stupid, then you’re going to have to stand up in front of them and tell them why you chose your stupid decision over the rest of them, and look each one of them in the eye and tell them (why you acted like) they don’t matter.”

Illustrating the type of impact she can have on an individual swimmer, Hoyt recalls a young man with scant swimming experience who doubted he could stand the workouts. But she laid down ground rules that there would be no quitting and that he had to give her two weeks to get him comfortable no matter how much he hated her or the work. She reinforced that with a motto she keeps on her office door written in Latin for “I will find a way or make one.”

The boy’s father called Hoyt once to say he could not get his son out of the car for his workout. She gave that swimmer the weekend off and met with him Monday to assure him he could achieve his goal and that “I will never ask you to do more than you are capable of doing.” The story concludes with the swimmer pushing through the barrier he thought he could not move past, loving the sport enough to swim year-round, improving his grades and moving on to college.

In a different case, a note arrived years after graduation from a former swimmer thanking Hoyt for time she spent standing around talking during practice. “He said, ‘You never knew this, but those were the days that I was terribly depressed, and felt like going home and killing myself. ‘ It just shows that as a coach you never know how you will impact a child, even if it’s just by listening.”