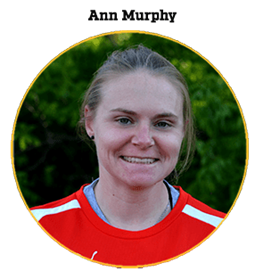 Murphy is one of 50 national recipients of the Double-Goal Coach award, named for coaches who strive to win while also pursuing the more important goal of teaching life lessons through sports. The award includes a $200 prize, a certificate, and mention within the websites and newsletters of Positive Coaching Alliance (PCA), a national non-profit developing Better Athletes, Better People through youth and high school sports.

Murphy has been named one of four winners for an all-expenses-paid trip to Palo Alto, CA to participate in a panel discussion on-stage April 22 at PCA’s 16th Annual National Youth Sports Awards Dinner and Benefit Sponsored by Deloitte.

“Ann helps her players win on and off the pitch,” said Jim Thompson, PCA founder and CEO and author of nine books on youth sports, including The Power of Double-Goal Coaching. “By creating a positive, character-building youth sports experience and serving as a Double-Goal Coach, Ann helps youth develop into better athletes and better people.”

In addition to the coaching roles for which she was nominated for PCA’s award, Murphy is a Kansas City Police Department officer, pursuing a PhD with a dissertation focused on youth mentorship and gang prevention. She also plays for the WPSL’s Kansas City Courage and serves as a staff coach for the KC Courage High School Alternative Soccer Team and as a Staff Coach for Sporting Lee Summit.

Murphy started coaching underserved youth in Northeast Kansas City in the aftermath of a gang-related teen homicide she was investigating, while at the same time hearing from a friend who was a middle school teacher about several at-risk students who loved soccer and could be formed into a team. Those eight sixth-grade boys were the original FC Jaguars, and they are now high school juniors, still playing for Jaguars under Murphy’s non-profit Youth R.I.S.E. (Resilience, Influence, Support, Education).

R.I.S.E now comprises three Jaguars teams that compete at the highest levels of youth soccer in the Kansas City area and sometimes travel to college showcase tournaments. “We had 18 kids graduate high school last year, and 12 went on to college,” Murphy said. “This year I have five kids committed to college on full scholarships and we’re still working on two more seniors right now. Next year will be a big class, the original kids I was coaching. I think we’ll have 14 graduating high school; two want to go military and the others want to go to college.”

The amount and depth of Murphy’s commitments often have her working a midnight shift for the police department, “sleeping a couple hours,” fulfilling other school and coaching commitments, then working with Jaguars “from 4 p.m. to 8:30 p.m. by the time I take all of them home,” she said. “We have a partnership with the Kansas City Police Athletic League, so they give us a van for out-of-town tournaments, and I use my vacation time to take kids to college showcase tournaments and get them recruited.”

Murphy sees the result of her work with youth as nothing less than “transforming me and the kids,” she said, “for example, knowing a kid who feels safe enough to call on me at two in the morning when he’s sleeping under a bridge because his mom kicked him out of the house. He used to be gang-affiliated and had a 1.5 GPA. Now he has a 3.5 GPA, works full-time for a construction company, and is saving up to go to community college so he can be a business major and start his own construction company.”

Beyond the normal coaching challenges of teaching soccer skills and getting teammates to play well together, Murphy also faces issues and behaviors common to impoverished urban areas. For example, she said, some react strongly to rough play or even a referee placing a hand on a player. “Most kids from that community call it ‘frontin’.’ You have to present a very aggressive front because in their schools and their neighborhoods you’ll get killed if you show that you’re weak. I kind of have to calm them down about that.”

She also must find ways to meld the cultures and learning styles of refugees and immigrants from 15 countries “One kid is from Iraq,” she said, “and he’s very angry. He has a lot of aggression that shows on the field. If I see it, I pull him off and sit him on the bench. Talking to him calmly, he’s able to re-set his brain and learn that anger and aggression don’t work, so he goes back out there and tries something else. It’s different with every kid. You have to read the kid.”

Murphy is usually the only female coach in the Jaguars’ tournaments, she said. “But because we have entire teams of refugees and immigrant kids and second-generation Hispanic kids together from a poor-income community, and they can compete and win these tournaments, they don’t see me as female. They just know I have experienced some of the things they deal with, and they see how they can react to the world and realize, ‘I can do this.’ ”