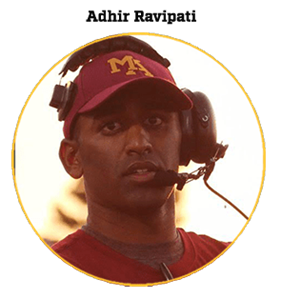 Ravipati is one of 50 national recipients of the Double-Goal Coach award, named for coaches who strive to win while also pursuing the more important goal of teaching life lessons through sports. The award includes a $200 prize, a certificate, and mention within the websites and newsletters of Positive Coaching Alliance (PCA), a national non-profit developing Better Athletes, Better People through youth and high school sports.

Ravipati has been named one of four winners for an all-expenses-paid trip to Palo Alto, CA to participate in a panel discussion on-stage April 22 at PCA’s 16th Annual National Youth Sports Awards Dinner and Benefit Sponsored by Deloitte.

Ravipati, who played under Jim Harbaugh and David Shaw at the University of San Diego, has instilled a strong culture at Menlo-Atherton after just two seasons. One key is the Covenant, a posterboard with a mission statement and the team’s goals – athletic, academic and otherwise -- written out and kept with the team as a reminder throughout the season. The team has added new elements to the Covenant recently, such as interpersonal components to prompt conversation among teammates about what they need from each other and the team, Ravipati said.

The need for such conversation is steady, given the sharp socio-economic divide between some teammates from Menlo Park and Atherton on the more affluent side and other teammates from the troubled neighborhoods of East Palo Alto. Ravipati reflects on that dynamic within the team: “I chose Menlo-Atherton, because we have one of the most unique student bodies in the country and one of the most unique experiences we can give our kids. Football happens to be one of those unique touchpoints, where we have these kids from different backgrounds all interacting together. It’s a chance to give a transformative experience to the kids.

“A lot of these kids probably wouldn’t interact with each other if it wasn’t for sports. We have kids from Menlo Park and Atherton, who, if you looked at them you’d think everything was amazing in their lives, just because they come from an affluent family and seem to have everything, but you learn some things about what they’re going through. Then you get the flip side of the kids from East Palo Alto, and together they learn an ability to rely on each other and be there for each other. Getting those guys to spend a lot of time together means a lot to their personal growth. It helps us bridge those divides, and you see really cool things, like kids from Menlo Park and Atherton going to hang out in East Palo Alto and the flip of that. We take that very seriously, and the kids embrace it, and we’ve seen some really special relationships come out of that.”