SHOUT OUT TO SIXTEEN QUALITY COACHES IN NEW ENGLAND:

We are honoring 16 New England coaches from more than 2,000 nominated nationwide as part of PCA’s 2017 Double-Goal Coach Award Program presented by TeamSnap. The Double-Goal Coach Award honors youth and high school coaches who strive to win while also pursuing the even more important goal of teaching life lessons through sports.

All 16 coaches selected were nominated by a player, parent, or fellow coach; were supported by multiple testimonials; and impressed the awards committee with their devotion to helping develop Better Athletes, Better People. PCA–New England is proud to honor all 16 of these exceptional coaches. Nick Burke inspires young athletes to be the best they can be. Coach Burke encourages his young players to take risks and be creative, at the risk of a loss on the scoreboard. Building confident, selfless, collaborative players with a strong work ethic has brought Coach Burke’s teams countless victories, but his players’ families appreciate above all else the life lessons he instilled in them. Jaye Carlson builds better people through sports. Coach Carlson coaches her athletes and partners, individuals with and without intellectual disabilities, by modeling the warmth, encouragement, and communication that makes for happiness and success in sports and in life. Coach Carlson fosters an environment that models for her partners how to become advocates for individuals with special needs. Suzie Hoyt does not need the coaching advice that “kids don’t care what you know unless they know you care” because every athlete she coaches knows how much she cares. Coach Hoyt builds up her athletes with the kind of truthful, specific praise that resonates with each athlete. Even under the most challenging of circumstances, Coach Hoyt stands up as a role model for her athletes respecting the game and she is unafraid to share how difficult that can be. One of her athletes simply said “she believes in all of us and makes us believe in ourselves.” 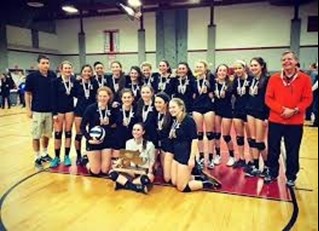 Richard Barton has profoundly influenced the lives of many young male and female athletes at Newton North High School. While winning state championships is memorable, Coach Barton has a much longer-lasting impact on his athletes. Coach Barton gives his athletes the tools they need to discover their best selves. One parent shared that in coaching her children, Coach Barton “guided them as they revealed to themselves, their families, and their teammates that deep inside them is the potential to be an athlete, a talented competitor, a fierce warrior, a winner, and a compassionate human being.” Rick Gale is “the person everyone wants to coach their child, because he is so much more than an athletic coach.” Praised for having an infectious positive energy, Coach Gale gifts his players with a love of the game. Coach Gale’s positive approach has brought him scoreboard results, and the respect of other coaches who elevate their coaching by following his example. Coach Gale shapes young athletes into strong, confident people. Dave Hall shares the joy of running with his athletes. Inspiring girls with his belief in them, Coach Dave (as all his athletes call him) supports their efforts and encourages them to set their own goals and assess their own progress. With his patient, positive style of coaching, girls exceed their expectations, gain confidence, and learn valuable life lessons. Dan Mark has been coaching for 30 years, and in that time he has become known for his commitment to sportsmanship, encouragement, and humor. Coach Mark’s players learn to respect the officials, their opponents, themselves, and the game. Playing for Coach Mark means you are required to put in a full effort. For Coach Mark, mistakes are an opportunity to learn.

Sarah Mik coaches girls’ basketball teams that succeed on the scoreboard and beyond. Coach Mik has found that by teaching lessons in sportsmanship, character, and respect for the game, winning takes care of itself. In coaching young athletes, Coach Mik gives them the confidence they need to succeed at the next level, and in any aspect of their lives. She pushes her athletes out of their comfort zone and assures them that mistakes are ok, and part of the learning process. Coach Mik teaches love, leadership, and the importance of integrity. Girls who play for Coach Mik leave her program with the tools they need to become mature, respectful adults.

Kim Pellerin is a field hockey coach in a class by herself. Through 30 years of coaching high school field hockey in Seekonk where she herself played the game, she has amassed an immense number of wins. More importantly, she has developed generations of female athletes who respect themselves, each other, and the game. Coach Pellerin’s legacy was on display when, on her 30th anniversary as a coach at Seekonk, more than 100 former players returned to salute her, don equipment, and play a series of spirited alumni games. Her athletes consistently describe Coach Pellerin as urging them to strive to be the best they can be, requiring them to practice until they master any skill, praising their improvement, and encouraging them to move on from their mistakes to the next play. Promoting community service, sportsmanship, teamwork, and positivity, Coach Pellerin is a model for how to combine competitive performance with character development.

Jose Roy has embraced and become a champion of the PCA Way as a coach of Portsmouth Little Leaguers. Coach Roy understands that his athletes have more fun and perform better when their tanks are filled with meaningful, positive feedback. He focuses on the development of mastery of baseball skills through repetition, and he challenges his athletes to set goals to improve themselves. Coach Roy values competition and winning, and he ensures that, win or lose, kids on the teams he coaches learn not just a few skills, but also learn about themselves and how to be good teammates. 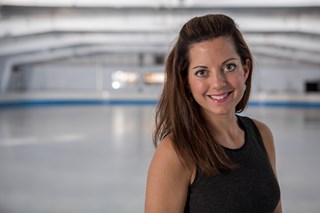 Carrie Wall is a dedicated, energetic, and most importantly, positive coach who helps her skaters become the best athletes and the best people they can be. Stressing the importance of preparation, focus, intensity and resilience, Coach Wall is a role model for her athletes. She instills in her athletes qualities like gratitude, humility, sportsmanship, resiliency, and respect that reach far beyond the rink. She teaches them how to win, and she teaches them a much harder lesson, how to lose, graciously and with a willingness to learn from the experience.

Chris Cifelli, regardless of the sport or season, coaches teams who never give up. Emphasizing both competitiveness and development in his athletes, Coach Cifelli encourages them and consistently asks them “can you get better?” Coach Cifelli is a knowledgeable educator who knows his players and their needs, physically, emotionally, and educationally. He develops leaders, with smiles and laughter, and they keep coming back. 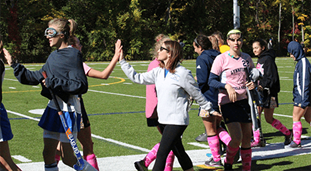 Tara Early is more than a field hockey coach, she is a relentlessly positive leader and role model who instills confidence and team spirit in her athletes. Coach Early motivates her athletes to give 100% effort until the buzzer sounds, no matter the score. Seeing the potential in every player, Coach Early helps them develop on and off the field. Her love for the game and her leadership, compassion, and positivity have helped develop her players and her program in ways that will only continue to grow. Tom LaDore coaches baseball with respect and admiration for his players, and for the game. He knows how to coach the individual athlete, using encouragement and positive body language to teach skills and confidence, and he knows how to coach a team, modeling how to pick up a teammate after a mistake. Coach LaDore respects officials, and is consistently professional in addressing opposing coaches. With a passion for winning while teaching his players how to be young men, Coach LaDore embodies the qualities of a PCA Double-Goal Coach. Dave Rogacki brought the Gilford field hockey program to a new level by developing a program that is fun, positive, and focused on everyone working hard to be the best they can be on and off the field. Sending personalized notes for academic achievement and encouraging his players to respect their bodies and themselves, Coach Rogacki makes his priorities clear. Coach Rogacki is a role model for sportsmanship, positivity, and building confidence. Under his guidance, the Gilford field hockey team, from freshmen to seniors, came together and won a state championship.

Brian Schultz is that positive coach everyone wants to coach their child. Even before he took a PCA course, Coach Schultz understood the power of positive coaching. He encourages his athletes to try new things and make mistakes along the way. He recognizes effort and knows how to help an athlete bounce back after a mistake. Believing in the value of youth sports as a place where young athletes can learn life lessons, while nurturing their competitive spirit and desire to win, Coach Schultz is a tireless volunteer, coaching three teams, serving on the board, and striping fields. He is a powerful role model for the young athletes he coaches and for his entire community.