PCA/NE is proud to announce that six New England coaches have been named Regional Double-Goal Coach® Award winners by Positive Coaching Alliance (PCA).  Believing that “what gets rewarded, gets repeated,” PCA named 100 of the finest youth and high school coaches across the country for this award to shine a spotlight on their exceptional efforts to make sports for young athletes a place where they can come together to learn, grow and develop the character they need to thrive in sports, and in life.

Serge Bouyssou has devoted himself to his athletes on and off the mats.  Sensei Serge’s mission is to make the world a better place through judo and wrestling at Mayo Quanchi Judo and Wrestling. 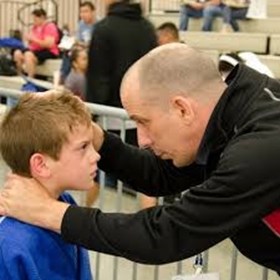 Twenty people—athletes, parents, and coaches—shared their appreciation for all that Serge has done to help them thrive, and to inspire them to become better people.  With a focus on “getting a tiny bit better every day,” Serge is credited with helping people change their lives.  Adopting and fostering children from around the world, Serge has inspired the Mayo Quanchi “family” to give back.  Serge’s students become coaches, and are inspired to not only win at athletics but to win in life by developing character, integrity, compassion, and contributing to the world around them, thanks to Sensei Serge.

Courtney Chaloff brought the Needham High School girls’ varsity volleyball team from winless to undefeated state champions in just six years, and she did it through relentless positivity, building a positive culture, and bringing out the best in each team member, on and off the court. Courtney built a program in which every player was valued.  With smiles and a calm demeanor, Courtney fills her players with confidence and inspires selflessness, positivity, and a love of the game.  Adopting the mantra “Believe because we Can,” Courtney’s players “compete with every fiber in their bodies” for themselves and for one another.  Players, parents, and coaches all describe Courtney as FUN and committed to “the ultimate goal...teaching young women life lessons that will empower them into adulthood through the sport of volleyball.”

Her nomination, and the references submitted by the parents of children she has coached, as well as the coaches she has coached as Arlington’s Director of Coaching, made clear that Paige not only understands the X’s and O’s of the beautiful game but that she also knows how to bring out the best in each person she coaches.  She is described as “once-in-a-lifetime coach” who can elevate a player’s game while addressing the areas in which they need to grow.  With the oft-repeated mantra that “confidence is key,” Paige Forster has had an exceptional impact on the 300+ volunteer coaches and the almost 2,000 young athletes in the Arlington Soccer Club.  Paige has developed a positive youth development culture.

Margret Heyward has coached basketball and taught life lessons to girls and young women in Waterbury, Connecticut for 26 years, and is beloved for her passion, caring, and the impact she has made. Coaching at the North End Recreation Center, Margret goes above and beyond in coaching not only basketball but also resilience and a ‘never give up’ mentality.  Twenty people—young women who have been coached by Margret, their parents, and Margret’s fellow coaches—all submitted thoughtful references sharing just how deeply how Heyward cares, and how she helps her players win on and off the court.  Margret is changing the game for young women in sports by sharing with them her passion for basketball and demonstrating every day the power of sports done right to unite young people around a common goal and to become strong, resilient, caring adults who will thrive.

Albert Veneziano has coached girls’ basketball at Madison High School in Maine for more than thirty years and the flood of people supporting him for this award, players, coaches, and more, all describe a coach and a person who truly cares about his players and who has dedicated himself to helping them become the best they can be on the basketball court, and in life.

Citing his passion, selflessness, humility, work ethic, and growth mindset, Al has had a positive impact on his players and the Madison community.  Al displays positivity every day, whether he is supporting his young athletes or battling cancer and inspiring others to action.  It is little wonder that Madison High School named its gymnasium after Al Veneziano in 2019. “What gets rewarded gets repeated” and everyone should have a coach like Al who believes in them.

Richard Ward has coached young athletes in Boston for decades with phenomenal results on and off the field. As a coach in Red Sox RBI (Reviving Baseball in the Inner City) program, Richard took a team of softball players who lost every game in their first season to undefeated for five years. Richard coaches young people in baseball, basketball, softball, and track, and helps them gain access to sports in and out of the city, including skiing.  One of the hallmarks of Richard’s calm, caring coaching is that he goes above and beyond for his players.  Consistently modeling respect for players, officials, opponents, and the game itself, Richard’s players learn to embrace this culture of respect.  When a player makes a mistake, Richard encourages them to “get the next one.” In guiding players to become the best they can be, Richard “lets them lead” enabling them to develop the confidence, grit, leadership and so much more to help them on the playing field, and in life.  With his focus on the joy of the game, Richard has helped many young softball and basketball players, track athletes, skiers, and more to reach for their goals, and thrive.