Scholarship Finalists Give Back and Get More in Return

There’s a steal along the sideline. His teammate fires the ball in his direction and through the arms of two defenders.

He dribbles to his left over half court, crosses over right leaving two more defenders behind, and races for the top of the key.

As he reaches the right elbow, one of his teammates hustles over and sets a screen on the last remaining defender between him and the basket, giving him an open look.

He puts it up…

And it goes in! His teammates and fans erupt!

Smiling and applauding coaches and teammates await him on the bench as he glides in his wheelchair toward them with an even bigger smile on his face.

This was just one of many exciting plays that took place as 2017 Triple-Impact Competitor Scholarship Finalists scrimmaged the Jr. Wheelchair Cavs Basketball team at the Boys & Girls Clubs of Cleveland during the PCA-Cleveland Day-of-Service.

For the scholarship finalists who volunteered, it was a fun and surprisingly exhausting and inspiring experience.

See the full reaction from Jamalys

“I know from the beginning, everyone was like, ‘Okay, so this is going to be a relatively easy game,’” said Jamalys Rodriquez, a scholarship finalist and basketball player from Bard High School Early College in Cleveland. “But…as soon as everyone tried out the wheelchairs, that was not the case at all.”

Ethan Stishan, whose football season at LaBrae High School was cut short by an ACL injury, was equally as moved, even though he wasn’t able to participate in the scrimmage.

“This day…so far has been amazing. To see all the kids’ reactions…Even though I’m not able to get in a wheelchair, just watching it is making me laugh and smile. Today has been a great day and it’s nothing like I expected.”

What Ethan and his peers expected was to volunteer their time to help with the wheelchair basketball practice, provide encouragement for the kids, and provide the team with a different level of competition as they prepare for their tournament play in a few weeks, according to PCA-Cleveland’s Executive Director, Marty Mordarski. “In the end, our finalists left feeling inspired by the level of skill and confidence with which the kids played, a greater appreciation for the strength and abilities of those kids, and a greater sense of gratitude for the gifts and abilities they each possess.”

The scrimmage was the result of a partnership with PCA-Cleveland and Achievement Centers for Children, which coordinates the basketball program and other adaptive sports programs in Greater Cleveland. It was part of a “Day-of-Service” designed to bring PCA-Cleveland’s Triple-Impact Competitor Scholarship finalists together to meet and make an even greater impact through sports.

The scholarship finalists were selected by PCA-Cleveland from a pool of over 80 applicants across Northern Ohio and were announced to the public in August. From this round of finalists, five (5) winners will be selected to receive $1,000 college scholarships. The winners will be announced later this year and acknowledged during a celebration event and gala in early 2018.

“This was a wonderful opportunity to witness the commitment of these student-athletes to something larger than themselves or their individual sports,” said Mordarski, “Their willingness to give back demonstrates a core principle of being a Triple-Impact Competitor; as being one who strives to elevate one’s game and community.” 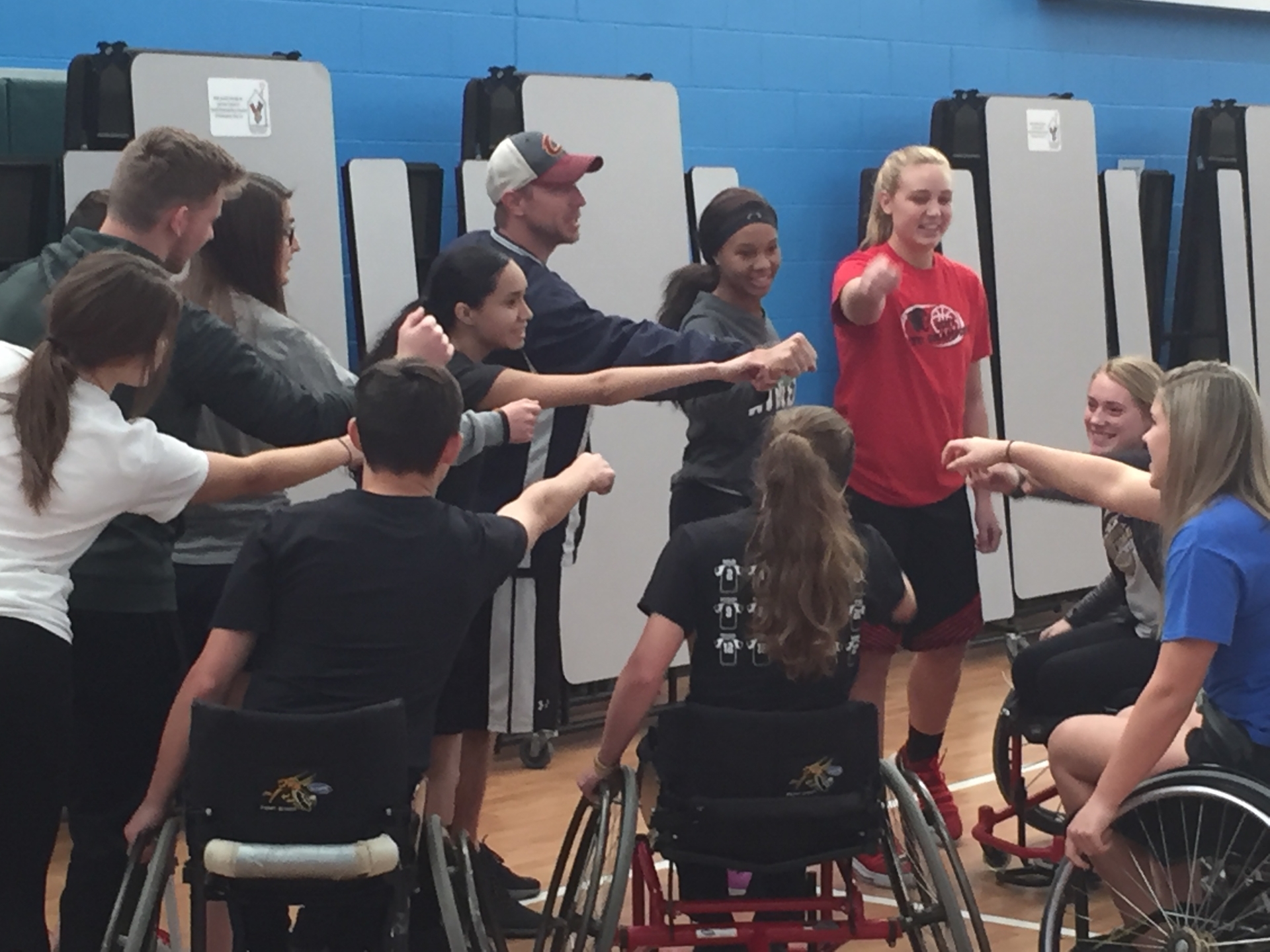 PCA-Cleveland TIC Scholarship finalists bringing it up before taking the floor.

Mike Urban, Manager of Sports Services for Achievement Centers for Children shared, “It was just a nice day to bring the two groups together…interact…and teach the Positive Coaching Alliance about our wheelchair program, as well as give our kids the opportunity to be a part of the mentorship of that program. It’s a win-win day for everybody.”

In addition to volunteering with the wheelchair basketball program, the scholarship finalists also donated new and used athletic equipment through a Cleveland nonprofit, Keep Playing Cleveland, which partnered with PCA-Cleveland to coordinate an equipment drive to benefit the Boys & Girls Clubs of Cleveland (which hosts the Wheelchair Basketball program’s practices). Dozens of items were donated including kick balls, footballs, 6 basketball nets, 7 basketballs, 10 soccer balls, 14 jump ropes, and 18 cones. Plus, Keep Playing Cleveland collected bins of additional items collected by other schools, athletic programs, and individuals throughout Northeast Ohio. 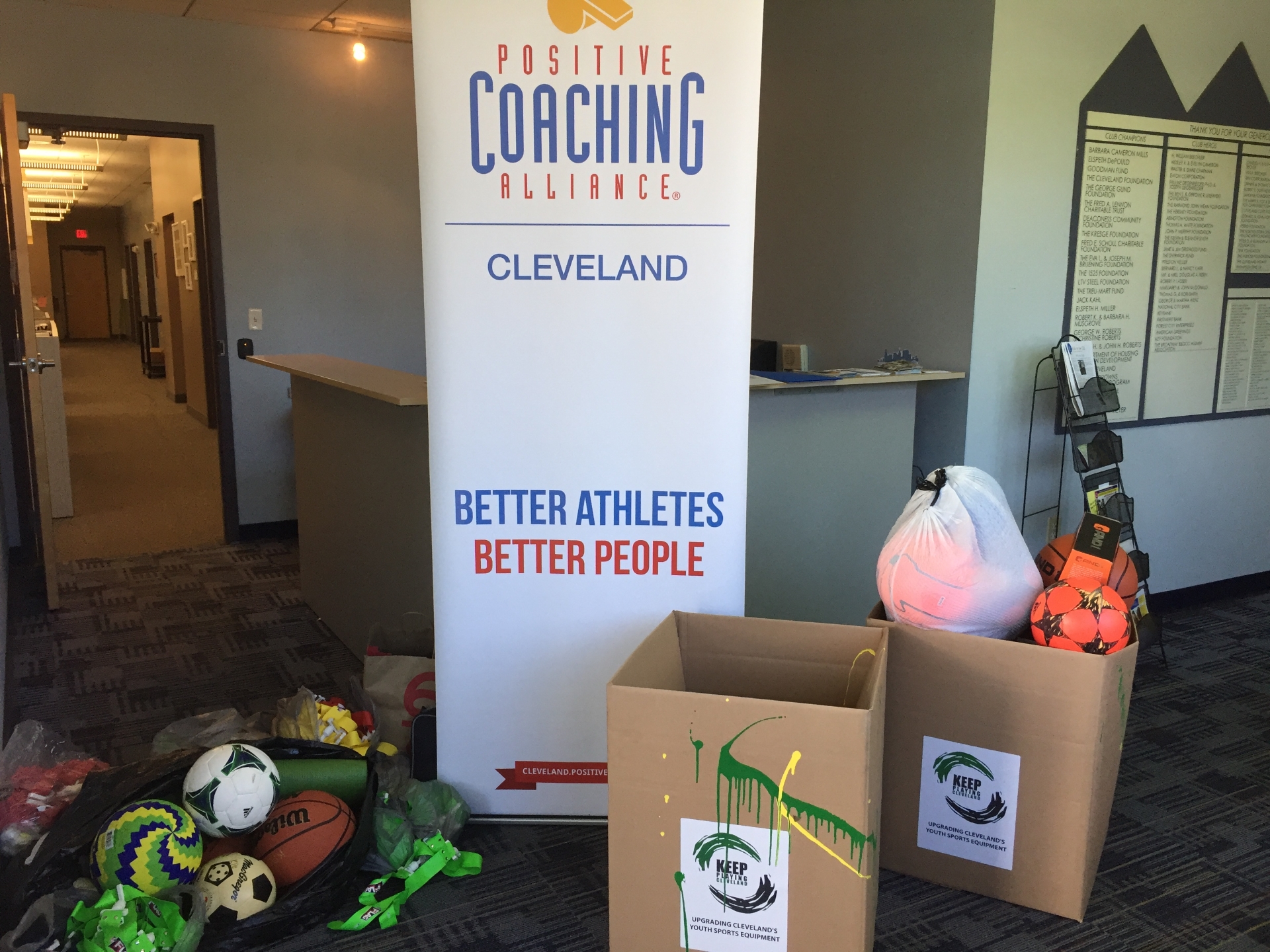 Some of the items donated via Keep Playing Cleveland to the Boys & Girls Clubs of Cleveland.

“Today was a wonderful example of the power of sports to bring people together, and the positive impact that can have on individuals, teams, and the community,” added Mordarski. “Our finalists came from all across Northern Ohio, from Toledo to Painesville to Norwalk to everywhere in-between. The distances travelled and commitment these student-athletes demonstrated today shows their understanding that sports allows us to part of something larger than ourselves, and the opportunity to build meaningful relationships and achieve even more together.”

Support for the scholarship program is provided by Ernst & Young and PCA-Cleveland Chapter Supporters including University Hospitals Sports Medicine, FOX Sports Ohio, and the Cleveland Indians.

For more information about the Triple-Impact Competitor Scholarship Program View Our Full Facebook Gallery To See All The Photos