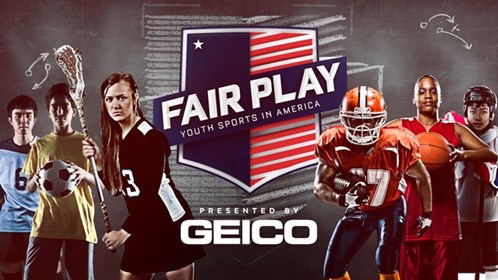 Stamford, Conn. – May 31, 2018 – NBC Sports Regional Networks today announced the launch of Fair Play: Youth Sports in America, a multi-platform documentary project that explores the $15 billion organized youth sports industry. Told through the voices of students, coaches, professional athletes and scholars, Fair Play: Youth Sports in America will air in June and July across all NBC Sports Regional Networks, on NBCSN and on NBC Owned Television Stations. The special is presented by GEICO.

“We look forward to bringing this story of youth sports participation to viewers across the country,” said Ted Griggs, President, Group and Strategic Production & Programming Leader for NBC Sports Regional Networks. “Fair Play: Youth Sports in America will showcase the intricate world of youth sports, shining a light on both the benefits and sometimes difficult aspects, while providing realistic recommendations for parents and athletes alike.”

A trailer of the one-hour documentary is available here.

The initiative will once again have several elements that extend beyond the on-air documentary. NBC Sports Regional Networks have created a dedicated national website, NBCSports.com/FairPlay, which features podcasts, articles, and interviews with youth sports organizers and participants to foster an engaging digital conversation in advance of the documentary’s television debut.

In addition, to honor student-athletes across the country, the RSNs and SportsEngine Inc., the leading software provider of sports life management solutions for teams, clubs and leagues, are hosting a contest in each market to celebrate young individuals who demonstrate determination, perseverance, and who serve as a positive influence through their participation in sports and academics. The contest is open from June 1 to June 15 on NBCSports.com/FairPlay, and is open to athletes 13 and older. Students must be nominated by a parent, guardian, coach or adult. The winner will have his/her story showcased on-air and across the network’s social and digital platforms.

Viewers can find the latest news, content and interviews using #FairPlayNBCS, and at NBCSports.com/FairPlay.