Our Conversation with the Cavs

Building and sustaining a championship culture is difficult at any level, let alone in the NBA, where only three franchises have repeated as champions in the past 20 years. That was one of several topics discussed by a panel of Cleveland Cavaliers executives at PCA-Cleveland’s “Conversation with the Cavs” event, January 25 at Quicken Loans Arena.  Over 120 local youth and high school basketball coaches attended the sold-out event, which featured Cavaliers General Manager David Griffin, Senior VP of Basketball Operations Trent Redden, and Assistant General Manager of Pro Personnel Koby Altman.

The panel – moderated by Cavs announcer Rafael “Rafa” Hernandez-Brito – also covered concerns about youth sports culture, coaching techniques, and skill development. Most poignantly, in response to a question about early sport specialization, Griffin said: “Statistically…if you’ve got an 11-year-old that’s a prodigy, they’re an accountant just as likely as anybody else on your team. You can be other-worldly good when you’re 11-years-old and nobody will ever know your name. So it’s not about that. Have them be complete human beings.

“Don’t ever let somebody focus on, ‘my kid,’ and honest to god we’ve heard this, ‘my kid is the best eight-year-old in the country.’ I mean, that’s awesome. But that doesn’t mean anything. It’s, ‘Are they a complete human?’ Because in all likelihood they’re going to have to go to college and they’re going to have to get a job. Don’t ever let anybody fall prey to thinking that about their kid.”

Redden added, “Sports is supposed to be fun. Telling your sixth-grade kid that she can only play one sport kind of defeats the purpose of why we signed up to do this to begin with.”

Another highlight occurred when the panelists discussed the most influential and successful coaches they’ve had the opportunity to work with and around; both Altman and Griffin referenced the impact of Kyle Smith, former coach at Columbia University and current coach at the University of San Francisco.

“[Smith] always said he was looking for great attitude, great work ethic, and guys that really wanted to be there,” said Altman, who worked with Smith at Columbia. 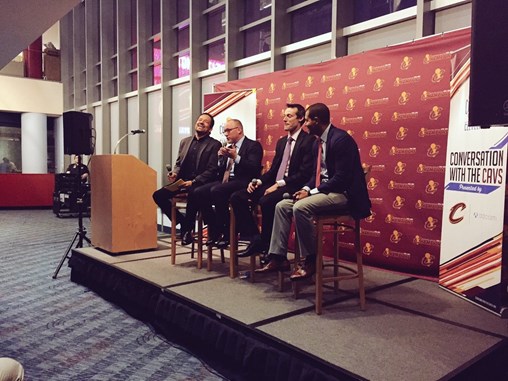 Griffin added that a phrase Altman brought to the Cavs from Smith and Columbia has stuck with him, as well. “You can either be a fountain or a drain. And teams that are really good have almost all fountains and nobody is a drain. When you look at the kind of coach you want to be…you can either be a fountain or a drain…do they feel better or worse from your presence? Are you giving something to the group as a collective that’s greater than you? We want players that think like that all the time.”

Redden expanded on the topic, talking about the characteristics of the best coaches he’s known. “You can’t be someone else. You have to be the best version of yourself. [The best coaches] all do it different ways, but the idea of reaching each individual player how they need to be reached, not one-size-fits-all mentality [is consistent].”

Another distinction Griffin mentioned: Passion for getting the message across – not being right.

Do you want to win or do you want to be right? You think you’re right with how you’re approaching a player…she’s looking at you like you’re crazy…and you think it’s her fault for not being smart enough to understand, and the reality is that it’s your fault for not being able to find a way to teach her the way she can learn. [The best coaches] are much more interested in winning and doing right by the player, not being right themselves.

On the question of how much time practice should focus on training versus just playing and keeping kids engaged, Altman said, “Let them play. Don’t stop [practice] every single minute. Let them mess up. Let there be some errors…make sure they understand what the drill is for.”

He and the other panelists also talked about the importance of doing something fun or interesting beyond basketball to break up the routine and re-energize the kids, such as a pizza party, a pool day, going bowling (something the Cavs did last year), or discussing current events (a practice Griffin attributed to San Antonio Spurs Head Coach Gregg Popovich).

Regarding skills that are important off and on the court, Redden explained, “If you can help someone build grit and resilience it lasts for their whole life. People have setbacks in basketball, people have setbacks in life. Dealing with that makes us better people and helps us get to the point where we can achieve things.”

The panel was very consistent in terms of their opinion on sport and position specialization, as well. Asked at what age kids should start focusing on just one position, Griffin joked, “37 or 38. You need to be able to play them all…the longer you can delay [specializing in a position] the better for their overall development. They need to understand each position on the floor and know the plays from each position on the floor. If you know that, that’s how you get to be like LeBron, computer-like; and he can literally go teach everybody on the court every position of the game…every team’s plays. 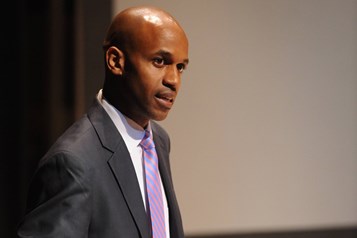 Following the panel discussion, PCA-Cleveland presented its 2017 Luminary Award (sponsored by The Adcom Group), to Terry Lipford, local basketball and football coach and director of the REACH program at University School. The award recognizes a coach or administrator who has transformed a community, team or institution through inspirational leadership, unwavering commitment and impactful results. The Luminary Award winners epitomize remarkable selflessness, integrity and service to others.

Lipford has touched many lives through the REACH program at University School, a rigorous summer enrichment program for academically talented African-American middle school young men and college undergraduates. The REACH program has been motivating and inspiring young men in the Greater Cleveland area for many years to pursue academic excellence and become life-long learners. 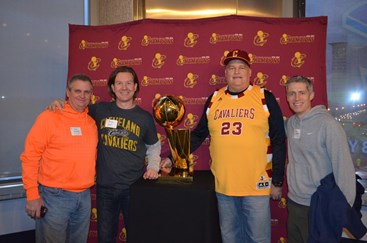 The event also featured the opportunity for attendees to be photographed with the Cavs’ Larry O’Brien Championship Trophy, including this group from Church of the Saviour Upward Basketball program, a PCA-Cleveland partner organization.

The overall Conversation with the Cavs event was one in a series PCA-Cleveland is hosting to bring the best and brightest in Cleveland sports together with local coaches to share valuable insights and discuss skill development and coaching techniques. In addition to raising more than $14,000 to support delivery of PCA-Cleveland’s resources and workshops throughout Northeast Ohio, the event highlighted the Cavs’ expanding support of youth basketball development and the NBA’s partnership with PCA, which trains coaches, administrators, parents, and student-athletes to develop better athletes and better people.

The panel discussion and Luminary Award were presented by The Adcom Group, and the event was sponsored by SureID, Teamwork Online, and Jackson Lewis, with additional funding provided by Ernst & Young. Promotional and media support were provided by Fox Sports Ohio and ESPN Cleveland.