Our 4th Annual Breakfast With The Champions

FOX News' coverage of the event

The Fourth Annual Breakfast with the Champions was held Tuesday, May 9th at Target Field. The event featured Chad Greenway as the guest speaker for the event. Greenway discussed his upbringing on a hog farm in South Dakota and the impact it made on him that the whole community was involved and supportive, as well as his climb to the NFL and his role as a leader on the team.

Ironically, Greenway was introduced to Positive Coaching Alliance a few years back when he attended a workshop while he was coaching youth sports. “I learned new mechanisms to coach that I had never thought about, although I’ve been around coaches my whole life.”

He went on to talk animatedly about his role as a coach to his daughters, and emphasized that the lessons taught during youth sports shape the next generation. He pointed out the importance of continued growth saying, “There are far more lessons to be learned from losing than from winning” and that giving credit for effort is a much better focus and outcome for athletes. 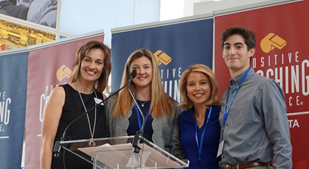 Andy Kromer, Junior Gold A Edina hockey player, was honored as a recipient of a Positive Coaching Alliance Sportsmanship Award. Kromer demonstrated tremendous sportsmanship after losing in the state title game against Minnetonka by staying back after his whole team left the ice, so that he could congratulate every single player on the Minnetonka team after they received their trophy.

PCA Founder and CEO Jim Thompson addressed the room and expressed his gratitude for the continued support in changing the ‘win-at-all-costs’ mentality and keeping kids in the game and learning valuable life lessons.

A BIG thank our major sponsors FOX Sports North, Minnesota Vikings, TRIA Orthopedic Center, Minnesota Twins, as well as all of our table sponsors and donors! FOX Sports North streamed PCA-Minnesota's event live on Facebook. This is a first for our national FOX Sports Supports partnership! Sarina Ghani is a senior student at the University of Minnesota and supports the PCA-Minnesota Chapter in several ways.