Monthly Motivations: The Play From Hell 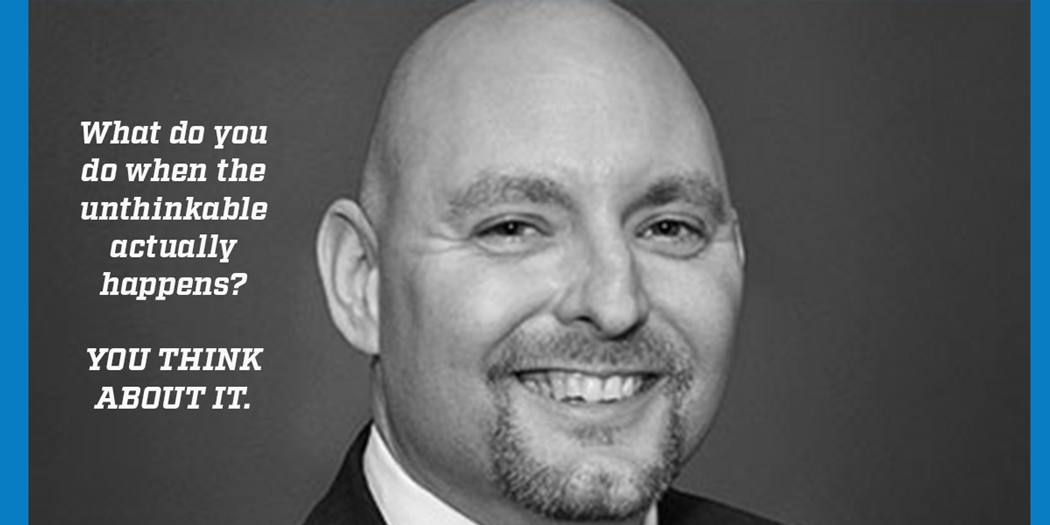 The events I’m about to describe happened more than 20 years ago, but the details are so fresh in my mind I can still see the glow of the summer twilight, feel the consistency of the infield dirt under my cleats, and hear the cheers and jeers from parents and coaches as loudly and clearly as if I was still standing on the mound today.

It’s the last half of the last inning, my team is up by three runs, and I’ve just been given the ball and asked to close out the game. We’re in a regional tournament, and beating the hosting hometown favorites. They haven’t hit the ball hard all day, I have a solid defense behind me, and I’ve got a three-run cushion. What could possibly go wrong?

Very quickly, we record the first two outs in the inning. I’m feeling confident. My next pitch zips over the plate and pops into my catcher’s glove. He doesn’t move it.

Suddenly, and without warning, the strike zone completely disappears. Parents and coaches for our team are beside themselves, and my teammates and I are in sullen disbelief as I proceed to walk the bases loaded on what appear to be 12 straight strikes.

However, despite the fact that the tying run is now coming to the plate, we’re still up by three runs and there are two outs. We’ve got this.

And then it happens: What my teammates, our parents, relatives, and coaches have long since referred to as “The Play from Hell”.

The next batter swings and hits a ground ball to our second-baseman. This is it! Easy play…game over…but wait! The ball inexplicably shoots between his legs into the outfield. One run scores and a second is coming around third. We’re now up by two.

Luckily, our rightfielder is right where he’s supposed to be, backing up our second baseman. He charges the ball, fields it, takes a big crow hop and fires it home…about 15 feet over the catcher’s head and into the backstop. Another run is in and the remaining runners are advancing to second and third. We’re up by one.

Being the pitcher, I back up the throw from the outfield and am lucky enough to catch the ricochet of the overthrow off the backstop on one bounce. I immediately turn toward third and realize that I can get the runner trying to advance by at least a step. I fire the ball on the bag to my third baseman.

He loses it in the lights.

The ball flies under his mitt and skips down the left-field line…which allows the runner to score the tying run, and the original batter to make his way around third to score the final and winning run.

To add insult to the injury of giving up an unthinkable two-out, three-error, four-run game-winning play, our opponent’s entire team clears out onto the field in a chaotic sea of excitement and proceeds to hold down their coach, brandish a pair of hair clippers, and shave his head bald in front of us as we line up to shake hands at the end of the game.

When we slowly saunter off the field in complete shock and await the post-game discussion and analysis from our coach, who was a master of breaking down all the little things we did or didn’t do that affected the outcome, we were even more surprised to get the word that there would be no post-game analysis. Our orders were simple. Go back to the hotel and get some sleep.

What do you do when the unthinkable actually happens?

You think about it.

One thing that makes youth sports so important and impactful is the incredible opportunity moments like these present to young people to learn and develop skills that help them become better competitors on the field – and in life. The gifts of time and perspective help us put these moments into context and better understand how the unimaginable can help us imagine solutions and approaches to future problems and disappointments throughout our lives. After more than two decades of reflection, I’ve grown to truly appreciate The Play from Hell as a gift – maybe even bestowed on us from a source other than the netherworld.

Never before (or since) as an athlete, coach, or parent, have I experienced one sports moment full of so many teachable moments and life lessons!

Life isn’t fair. (The disappearing strike zone)
Sometimes the calls go your way. Sometimes they don’t. No matter what the call, you have the power to control your response in those situations. Do you give up? Do you complain? Do you let it affect your mindset or your approach? Or do you keep fighting and focus on doing your job the right way?

Have your teammate’s back. (Ball between the legs)
Everyone makes mistakes. When you’re part of a team, it’s important to be ready to back-up and support your teammates when they do, just like our rightfielder did that night.

Stay within yourself. (Overthrow home)
Sometimes we let the moment get the better of us. The irony is that in those moments we tend to make more mistakes even though we’re trying even harder not to do so. We try too hard. We overthink. We overrun. We overthrow. However, when you’re prepared and focused, it’s easier to stay confident and trust that you can do the job you’re meant to do, regardless of the stakes or the situation.

Avoid distractions. (Ball lost in the lights)
Whether it’s the lights, the officials, the crowd and coaches, or the negative self-talk that often creeps into our minds in high-pressure situations or after we make a mistake, the most successful athletes – and people in general – find a way to eliminate distractions and focus on the task at hand and what is within their scope of control.

Lose with class. (Opponent’s over-the-top celebration)
We describe this as “Respect for Self” at PCA. If you value respect for opponents regardless of the outcome of a competition, can you still find the courage and strength to respect your opponent even when you perceive that they are disrespecting you? Or do you follow the adage that “Two can play at that game?” Can you still keep your head up despite all they may try to do to put you down?

Appreciate the emotion in the moment. (No post-game analysis)
Nobody likes “Captain Obvious.” As a coach, parent, or leader in any organization, there is absolutely a time and a place to offer criticisms and critiques. However, in the heat of the moment, especially a moment that is filled with so much shock and disappointment, it may do more harm than good to immediately start dissecting what went wrong – especially when it’s obvious to everyone exactly what went wrong.

And for me, I think that’s the most important lesson. The gift of quiet reflection and time that our coach gave us that night not only personally allowed me to calm down and work through the emotion of the situation, but when I was ready, it also allowed me to break down what happened through the lens of the approach he had drilled into us for so long – appreciating all the little things that made such a big impact on that play.

Most importantly, over time, I’ve also been able to appreciate how all those little things represented really important “big things” that continue to make a big impact throughout my life.

Now that’s something to think about!

Do you think too many youth and high school sports experiences lack a “big picture” focus? Do you want to do something to impact the culture and create more positive and character-building experiences for young people that help them become Better Athletes and Better People?

Then I invite you to make a donation to PCA-Cleveland as we launch our #PowerOfPositive annual campaign aimed at broadening access to our resources and workshops to a wider audience of youth sports organizations, schools, and communities that need the support but may lack the funds to provide it. Donate today to help impact the lives of thousands of local youth!

Marty Mordarski is the former Chapter Executive Director for PCA-Cleveland and has served several years as a PCA Trainer.