“Second place is the first loser.”

Given that yet another of our beloved Cleveland sports teams has come up short in a championship run, I feel compelled to dissect the meaning of this phrase and why it still bothers me decades since I first saw it on someone’s No Fear t-shirt at a football practice in junior high. 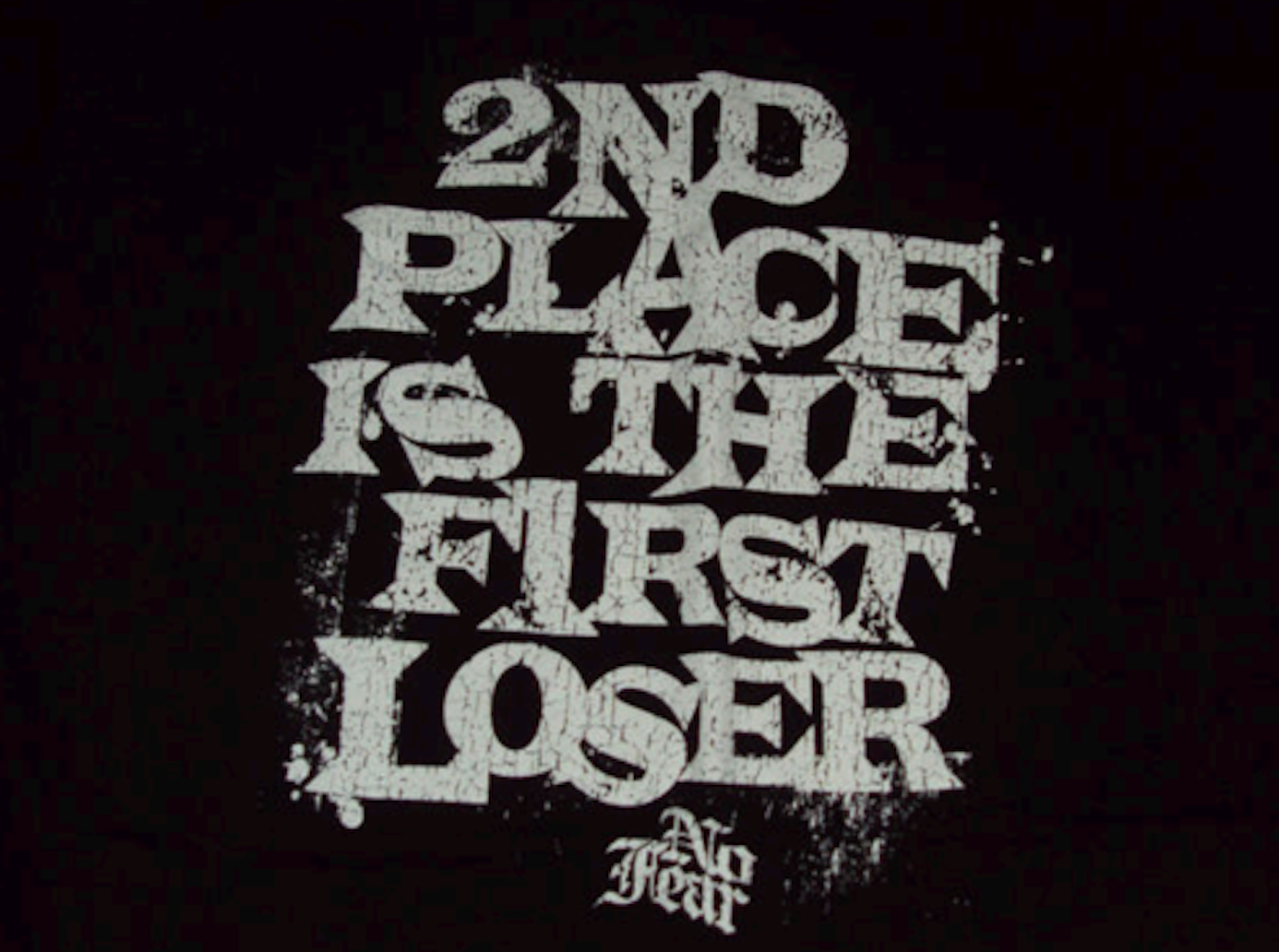 On its face, especially within the context of a race (running, swimming, driving), this phrase is true. The person who finishes in second place is literally the first loser. And that’s frustrating.

So…Then Everyone is a Loser (Except the Winner).

If you don’t win, you lose. You’ll get no argument here.

But does losing make one a loser?

If so, we live in a world full of losers. I’m a loser. You’re a loser. Everybody’s a loser.

Why? Well, even if you’re a “winner” based on the definition implied by this phrase, it can only be a temporary and fleeting state of being, right? No one wins everything all the time…even the best of all-time:

So then, how do we truly define a “loser”? What does that definition imply about the skill, character, and worth of an individual? Doesn’t calling someone a “loser” actually suggest more about the substance of a person than just whether or not he or she won a game or a championship?

In other words, when we call a professional athlete a “loser” because he or she came in second place, does that mean our kids are losers when they don’t win a championship?

Charlie Maher – PCA National Advisory Board member, sports psychologist for the Cleveland Indians, and keynote speaker for our upcoming PCA-Cleveland Youth Sports Night at Canal Park – has a very compelling take on this concept of letting winning or losing define a person’s value.

“Make sure that each athlete or team member learns how to separate their results as a performer from themselves as a person and the rest of their daily lives,” Maher states in a recent article he contributed to the PCA Blog.

Or, if you prefer the old adage attributed to Zig Ziglar, “Failure is an event, not a person.”

I see. I’ll bet you’re one of those guys who think everybody should get a trophy, too.

And you would be wrong.

Trophies, ribbons, and medals should mean something. They should reward excellence and reinforce the behaviors that drive that excellence that should be repeated.

Just giving someone a trophy for showing up only rewards someone for showing up and can minimize the importance of striving for excellence and the behaviors that lead to improvement and achievement.

Maybe you disagree with me. Maybe you think the literal interpretation of the word is fine and don’t buy into the idea that the word can carry a far heavier meaning in terms of the character traits of those on whom it’s bestowed. That’s fine. Then you know what? I’ll be a loser. I’ll gladly and proudly wear that label. Why? I’d rather be a loser than someone who didn’t compete…the “man in the arena” who “fails while daring greatly.” What’s the alternative?

Since no one can win all the time, the only way to avoid being a loser is to not compete.

Sorry, that’s just not an option.

That’s why after all these years that t-shirt still bothers me.

When we put the idea in the heads of kids that it’s all or nothing, black or white, either you’re a winner or a loser, we reinforce that failure is a character trait – not just an event. We minimize the hard work, resilience, concentration, teamwork, discipline, and determination it takes to compete and to improve. We fail to reinforce the very behaviors, habits, and character traits that increase the probability kids develop as better athletes and better people – and put them in a better position to actually win!

So what do they do in response? They might not push themselves to overcome obstacles, they may only focus on the sports and activities that are easy for them, or, which is what we see all over the country, they simply stop playing sports.

Second place isn’t first place…but it also isn’t third or fourth, and it’s probably not last. While it’s absolutely a reflection of your performance compared to your competitors, it could also mean a lot more than that. Maybe it represents a dramatic improvement from the last time you competed. Maybe it’s a testament to your effort and commitment and grit. Maybe it’s a reflection of your refusal to give up and the potential you still have to get even better.

The whole story is important. If it was only about the outcome, why would we ever watch a sporting event? Whether we like to admit it or not, we appreciate the skill, the anxiety, and the drama of competition and revere individuals and teams that can rise above it all and perform at a high level – regardless of the outcome. Otherwise, stadiums and arenas would be empty. Box scores, beat writers, and highlight reels wouldn’t exist…and we wouldn’t care about what a t-shirt slogan from the 1990s says about the state of sports over 20 years later!