I recently stumbled upon an artifact from my past. While cleaning out some old boxes in the basement, I found my “Bear” Cub Scout Handbook from my childhood. This discovery was relevant for two reasons: my oldest son is currently a Bear Scout so it was fun to compare our two books, and second, because the book contained a confirmation of an important but hazy memory from my childhood. 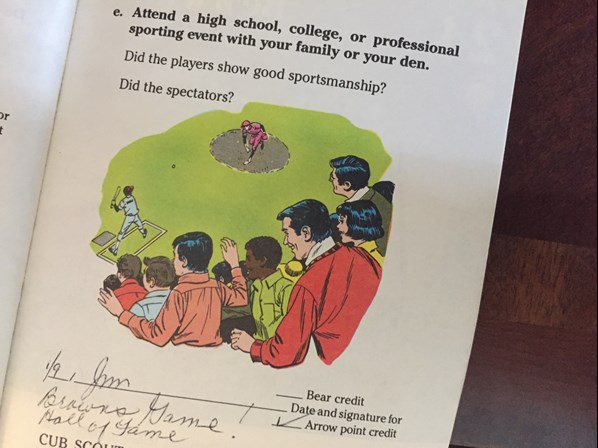 For as long as I can remember, my memory has been that my first Browns game was a playoff game against the Indianapolis Colts at old Municipal Stadium in the late 1980s, during the heyday of the original “Dawg Pound” when the atmosphere inside and outside the gargantuan 80,000+ seat 50+ year-old stadium, was unbelievably loud, rowdy, fun, and intense.

I remember the crowd. I remember the noise. I vaguely remember the game. Sometimes I wonder if I was really there. Well, after all these years, it turns out I had confirmation that my memory was correct. It was sitting in a box in my basement and waiting to be discovered 30 years later!

The date listed in my Bear Book, 1/9, corresponds to January 9, 1988, the day the Browns defeated the Colts 38-21 in the AFC Divisional Playoff Game.

However, as the memories of that day came flooding back to me, what was most interesting to me is that while the details and outcome of the game are still fuzzy, certain aspects of that day are as clear as if they happened just yesterday.

For example, I learned a lot of new words that day. Four-letter words. Either shouted by individuals or chanted in unison by the crowd.

In fact, my most vivid memory from that day is actually of a fan walking back and forth along the lower concourse with a banner that made a reference to the Colts’ then-star running back, Eric Dickerson, that…well…let’s just say they couldn’t show it on TV.

Now, if you grew up in Cleveland around the same time I did, you might feel the same way I do; that in many ways your attendance at your first Browns game was somewhat of a rite-of-passage. It meant that you reached a certain age where your family believed that you’d appreciate the game (and not want to leave after the first quarter), that you were mature enough to understand that what was happening around you wasn’t necessarily the way people normally do (or should) behave, and that you wouldn’t be terrified by what was happening around you (and want to leave after the first quarter).

So when I saw the entry in the book, I couldn’t help but laugh to myself because this memory and experience is filled with irony. To fulfill a requirement for Cub Scouts that prompted me to answer the question, “Did the spectators show good sportsmanship?” my family took me to a Browns playoff game at old Municipal Stadium in the 1980s!

Then I started thinking a little more. A lot has changed since those days in terms of the behavior that is tolerated not only at Browns games but at any professional sporting event. However, there is still certain behavior and language you expect to see and hear at sporting events that may not be exactly a shining example of “sportsmanship."

For example, despite the messages that you may find on the back of a ticket or that are displayed on the scoreboard before the game regarding “fan conduct,” when you attend a pro game for any sport, it probably won’t surprise you to see some fans show disrespect for the opponents and officials, maybe even each other. You don’t even have to go to a game – just listen to people react when watching a game on TV – listen to yourself!

Then there are the games themselves, where unsportsmanlike conduct penalties, technical fouls, red cards, flops, cheap shots, trash talk, bean balls, ejections, and suspensions are in many ways accepted as just “part of the game.” I wonder if we (myself included) have just come to expect and accept that some level of disrespectful and unsportsmanlike behavior is “normal,” and maybe even okay.

But is it okay?

On one hand, I think one can argue that within the context of being a spectator at a professional sporting event you have an opportunity and/or right to express yourself in whatever manner you think is appropriate. One could also argue that professional sports venues offer a great way to vent frustration, anger, and disappointment that (hopefully) doesn’t lead to actual violence…or maybe getting fired from your job. Because, let’s face it, there is almost no other public context where you can you act like some people do at a professional sporting event and it’s considered “okay.”

At the same time, I also think it’s extremely important to acknowledge that there is a big difference between professional sports – and youth and high school sports. After all it’s when we see behavior like this occur in the context of something like a 4th grade basketball game that many of us are surprised and appalled. It’s why stories about bad fan behavior, parent altercations, and out-of-control coaches at those levels garner so much attention.

But what happens when that behavior doesn’t capture our attention?

Sometimes the line between professional sports and youth sports gets blurred. Sometimes this behavior occurs at the youth and high school levels and sometimes what we do (or don’t do) as parents, as coaches, or as administrators can make the behavior seem almost acceptable. At those times do we let the perception of what seems acceptable (or at least not surprising) at pro sporting events start to justify what we see at youth levels?

People jeer officials, right? They trash talk opponents. They insult other fans and constantly ride their team’s coach and ridicule their own team’s players. It’s what you’d expect at a pro sports event, so why should it be any different at your daughter’s 7th grade volleyball game? Why is it wrong if a parent constantly yells during his son’s high school basketball game to distract opposing players who are shooting foul shots? Shouldn’t the kids just learn to deal with the pressure and heckling? That father is actually doing them a favor!

That type of thinking is disheartening to me because when those lines are blurred or completely erased, it means the lesson that was spelled out in my experience as a Cub Scout attending my first Browns game is completely meaningless. If “sportsmanship” isn’t important at the youth levels and disrespectful behavior is tolerated (and even sometimes encouraged and celebrated), what incentive do kids have to learn and practice respect for the rules, being grateful for opponents, showing empathy toward officials, supporting teammates, and living up to their own values?

Furthermore, if as parents we tell our kids how important it is to be respectful and to be a “good sport,” but they grow up watching us scream at our favorite teams on TV and shout obscenities at officials from the stands, how can we expect them to take us seriously? Can we be surprised or even upset when they behave the exact same way at their next travel soccer game? What if you behave that way at their next travel soccer game?

So after this long trip down memory lane that sparked a lot of internal reflection and debate, for me, I think the question is this: Where do you draw the line?

Within what context is unsportsmanlike behavior okay – and within what context is it not? And if you’re a parent, coach, athletic director, or on the board of a local youth sports association, how do you explain to young athletes where that line begins and where it ends?