Growing up as a huge basketball fan, NBA All-Star Weekend was always a highlight each year. A Spud Webb poster from the 1986 Dunk Contest hung in my room as a kid, I’ll always remember wondering why Larry Bird kept his warm up on during the 3-point contest, and Dee Brown’s ’91 performance still goes down as one of my favorites.

Those memories made it so special to take in All-Star Saturday Night live and in person for the first time in my life on Feb. 18. But what went down on Friday night will leave an even longer-lasting impression.

Thanks to PCA’s partnership with the NBA, I was asked to participate in the Jr. NBA Coaches Forum that Friday night. The event brought together New Orleans-area coaches for a conversation about the impact coaches have on youth – specifically focusing on issues of inclusion in sports and prevention of discrimination and gender-based violence.

PCA was honored to join Ted Bunch from A Call to Man – an organization that educates men on healthy, respectful manhood and preventing athletes from perpetrating gender-based violence – as well as Hudson Taylor of Athlete Ally, an organization that provides public awareness and educational programming and tools and resources to foster inclusive sports communities. Both Ted and Hudson set the stage giving brief presentations on challenges our society faces today in terms of what it means to “be a man,” as well as how we can create a more inclusive sports culture. The forum’s main event centered on a conversation with former NBA Center Jason Collins, his twin brother and current Golden State Warrior Assistant Coach Jarron Collins, WNBA legend Swin Cash, and four-time NBA Champion Horace Grant. A last-minute scheduling conflict for another speaker gifted me the chance to run point on what turned into an impactful conversation on the power and opportunity of sports.

Jason Collins told his personal story of courage, becoming the first active male athlete from one of the four major North American professional team sports to come out as gay in 2013. Collins recalled his decision to come out and noted the support he had from one of his former NBA coaches, Doc Rivers (a PCA National Advisory Board Member), whom he played for in Boston. Collins is using his role as an NBA ambassador to enhance how the league addresses social issues across the globe – including the very reason we were in New Orleans to begin with: the NBA’s decision to move the All-Star game from Charlotte because of the HB2 bill.

Jarron Collins discussed his support for Jason, sharing a story he experienced as an assistant coach for the Golden State Warriors. During a road game last season, Jarron noticed the in-arena “kiss cam” focused on two Warriors players. This led to the crowd laughing and cheering, with the public address announcer egging them on. Most people in the arena thought it was funny, but Jarron was disgusted at the gay-mocking nature of that form of “humor.”

Following the game, Jarron confronted the home team’s management about the prank, which eventually led to an apology from the team owner. In our session in New Orleans, he discussed raising awareness of inappropriate language and behavior that works against establishing an inclusive environment and the role coaches can play in creating a more positive culture.

Swin Cash, one of the most successful women’s basketball players of our generation, shared her excitement around her new role with the WNBA’s New York Liberty (Director of Franchise Development), which will focus on both the business and basketball side of the team. Cash mentioned preparing players for their lives after basketball, as well as helping them find a voice for causes they wanted to support off the court. Cash also reminisced about the coach who had the biggest impact on her, her high school coach, reinforcing the importance that youth and high school coaches have on individuals, and how long those experiences will stay with the kids you coach.

Horace Grant, who called the session one of the most powerful NBA events he’s been involved with, commended Jason Collins for the courage to come out. Grant harkened back to his 17-year career, noting that he could not imagine what Collins must had gone through keeping his secret for so long.

Grant, who is now a Special Advisor to the President of the Chicago Bulls, also discussed his interaction with youth in Chicago today. With all the problems of poverty and violence on the city’s South and West sides, Grant shared a story on helping a young boy map out his life goals – and connecting the importance of how education and employment would lead to the simplest things in life, like having food on the table everyday.

Getting to lead a conversation with these four people who have so aptly used their basketball success as a platform for social change was a new form of All-Star-dream-come-true. It even further validated for me – in the visceral way that only connection to childhood dreams can – the work that PCA does. 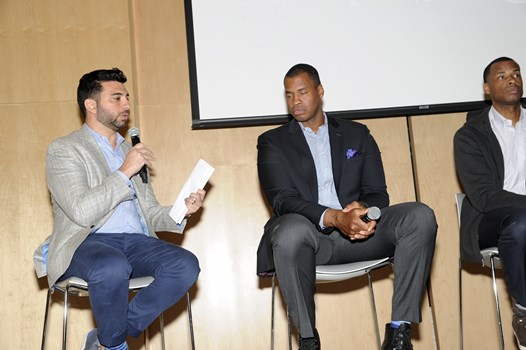 With our country’s people so divided, basketball (and all sports) can unite us. Sport brings together individuals from all walks of life, race, religion, sexual orientation and more. And we know if it is used the right way, it becomes so much more than a game.

The Jr. NBA has developed a new, turnkey instructional curriculum designed to better the youth basketball experience for players, parents, and coaches.