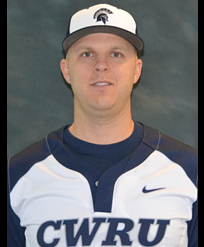 Adversity is one of the greatest opportunities we can be presented with in life…an opportunity to see what you’re made of, to improve yourself, and to lift the spirits of others.

When faced with challenges in our lives, we always have a choice: either run from – or try to run through the obstacles in our way. When faced with the biggest challenge of his life, Matt Englander (figuratively and literally) chose the latter.

In 2011, a little over five (5) years into his baseball head coaching career at Case Western Reserve University, Matt had surgery to remove a brain tumor. Instead of using his diagnosis and treatment as a reason to walk away from the game that he loves and his passion for mentoring and developing student-athletes, he chose to run forward and refused to let cancer take control of his life.

Since then, Case’s baseball program has enjoyed an unprecedented streak of success: six (6) winning seasons, breaking the school’s record for wins (twice), qualifying for the school’s first NCAA Tournament appearance (and making three subsequent appearances), and back-to-back regional runner-up finishes in 2013 and 2014. Englander’s teams over that period also boasted multiple All-Americans, Academic All-Americans, all-regional selections, and a D3Baseball.com National Player of the Year.

Throughout his struggles, Matt has stayed focused on his priorities in life including his family, his players, and his role as a coach, leader, and mentor. And he’s not done yet. Matt, who is also an avid runner, recently completed several marathons this summer, and has committed to running 50 marathons – one in every state. Perhaps this statement from Matt during a recent television interview says it all, “Nobody is proud of easy accomplishments.”

Matt’s attitude and determination to take responsibility for his own health and continue to sprint toward his goals has inspired his student-athletes, fellow coaches, administrators, and our entire community. And for this incredible commitment and respect for himself, his teammates, his program, and his family, we are proud to honor Matt with the PCA-Cleveland Luminary Award.

About The PCA-Cleveland Luminary Award

The PCA-Cleveland Luminary Award presented by Adcom is presented to a coach or administrator who has transformed a community, team or institution through inspirational leadership, unwavering commitment and impactful results. The Luminary Award winners epitomize remarkable selflessness, integrity and service to others.

A high school teacher in the South Euclid/Lyndhurst School District, Todd Deutsch has been a fixture in the local youth and high school baseball coaching scene for over 17 years.

Deutsch is known for his caring and innovative approach to teaching the game with a particular emphasis on stressing proper mechanics and fundamentals. He has combined his love for the game of baseball and softball, along with his teaching skills to develop a team-first environment that challenges his athletes to be their very best.

About the PCA-Cleveland Diamond Coach of the Year Award