The full crowd at this year's annual benefit.

Guests mingle at the VIP reception.

The full crowd at this year's annual benefit.

Guests mingle at the VIP reception.

Please share your photos with us using the hashtag #youthsportsawards on social media and tag @PositiveCoachUS!

Thanks to all those who supported PCA with the purchase of a raffle and/or premium drawing entry. All winners have been notified their entry was drawn.

You can watch Mike Tirico's introduction below:

The event, hosted at Santa Clara University’s Leavey Center helped PCA raise more than $680,000, which will be instrumental in serving youth athletes in need of positive coaching throughout the country. THANK YOU to all guests that supported PCA for this special celebration.

In addition to honoring Brandi, Julie and Mia with PCA’s Ronald L. Jensen Award for Lifetime Achievement, we also welcomed four National Double-Goal Coach® Award Winners on stage for a panel discussion. Additionally, for the first time ever, PCA named one Grand Prize Winner––Charlean Crowell––who joined us on stage all the way from Hurtsboro, Alabama.

The event started with Mike Tirico introducing PCA’s President Tina Syer who highlighted that not only were Brandi, Mia and Julie spending time with PCA on Saturday night, but that they also took part in a PCA Youth Soccer Clinic on Friday Night. You can watch that video below.

You can see the full recap of our soccer clinic here, and view the opening remarks from PCA President Tina Syer below.

Next, National Managing Partner for Deloitte, Kirsten Rhodes, joined Tirico on stage. Deloitte was the presenting sponsor for this year's awards:

Winners of the 2019 Double-Goal Coach® Awards took the stage next. Omar Cervantes (Soccer, San Lorenzo, CA), Jorge Chen (Track & Field, Atherton, CA), Meghan McDonald (Rock Climbing, New York), and Whitney Pogue (Mountain Biking, Utah) represented the award winners on stage, but not before we got a sneak peek into what makes these coaches great with the following four videos:

All 4 winners were then welcomed on stage for a Q&A with Mike Tirico, which you can watch below:

Next, Charlean Crowell from Hurstboro, Alabama was welcomed on stage with Julie Foudy as the very first National Double-Goal Coach Award Winner presented by TeamSnap thanks to Taube Philanthropies. To learn about Charlean, you can watch the video below:

As Julie Foudy welcomed Charlean on stage, they had a special announcement for the crowd, which you can view below:

The crowd learned that Charlean would be featured on Good Morning America (GMA) which happened Monday morning! You can view the clip of Charlean and PCA President Tina Syer on GMA with Robin Roberts below:

As the honorees took the stage for a panel, Master of Ceremonies Mike Tirico knew what he was in for— a panel full of shared joy between teammates, uncontrollable laughter, insights on the power of positivity, and wisdom on leadership and coaching. You can watch the full panel below:

While the panel lasted about 20 minutes, the audience enjoyed the clear bond between teammates, as highlighted by moments of uncontrollable laughter! What a joy to watch these teammates interact. You can enjoy that again now by watching below:

While all attendees certainly enjoyed the shared joy between the legendary teammates on the panel, the panel also had it's a fair share of wisdom from this year's honorees.

First, Mia Hamm shared her reason for coaching— she hated that her daughter (and other players on the team) would frequently hear the word "don't", so she coached so they could hear the word "do"— you can watch that clip below:

Next, Mike Tirico asked Julie Foudy a question about leadership, and her response that leadership is personal, not positional, was a key takeaway for many in the audience. You can watch that clip below:

Finally, when asked about the power of positivity, Brandi Chastain shared her thoughts, which you can watch below:

After the panel and fundraising for the evening concluded, the event came to a close as Ricky Martin's famous World Cup song (La Copa de la Vida) from 1999 played, and the 99ers threw soccer balls into a crazed crowd. What a way to end the evening!

A huge thank you to all of you that supported and attended this year's event. Thank you for filling the room with generous PCA supporters!

A special thanks to Mindy Rogers for being our leader as event chair for the fourth straight year. 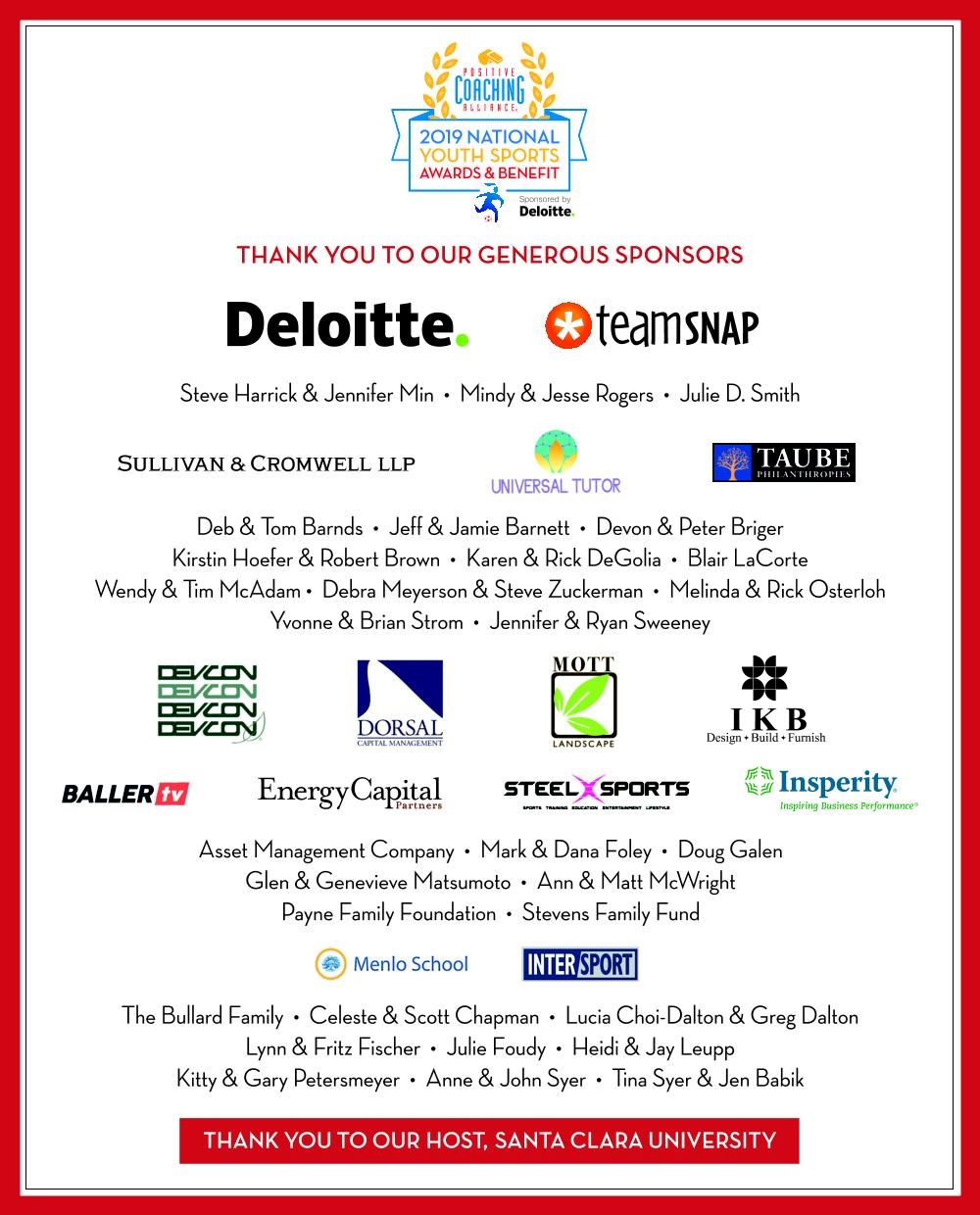 View our full photo album by clicking below