Kobe Bryant and His Impact on Women’s Sports

In honor of National Girls & Women in Sports Day

Making the world a better place was something Kobe Bryant was trying to do for his daughters and for all girls and women in sports. Kobe was truly a champion of women’s sports and empowerment at ALL levels of play. From coaching his daughter’s (Gigi’s) AAU basketball team, to supporting women’s collegiate basketball games, the WNBA, and the Olympic women’s soccer and basketball teams, Kobe would be there to show his support.

At the 2019 WNBA All-Star Game, when asked why he brings his daughters to basketball games, Kobe said, “It’s important for them to see great basketball, and also, just for the women’s game in general, it’s important to raise awareness about it. To have more women out there playing the game… [It’s] the future.”

Back in 2018, Kobe was a guest on ‘Jimmy Kimmel Live’ where he shared a fun story about his daughter, Gigi, wanting to be in the WNBA and the interactions with fans: “The best thing that happens is when we go out, and fans will come up to me. [Gigi will] be standing next to me, and they'll be like, 'Hey, you've got to have a boy. You and [Vanessa] have got to have a boy, have somebody carry on your tradition, the legacy.' She’s like ‘Oy, I've got this. You don't need no boy for that. I've got this.’ And I’m like that’s right. Yes you do. You got this!"

In Kobe’s final interview with CNN sport he made it a point to talk about the WNBA when asked if he thinks women could ever compete in the NBA. He said, “I think there are a couple of players who could play in the NBA right now honestly. Diana Taurasi, Maya Moore, Elena Della Donne. There's a lot of great players out there so they could certainly keep up with them." 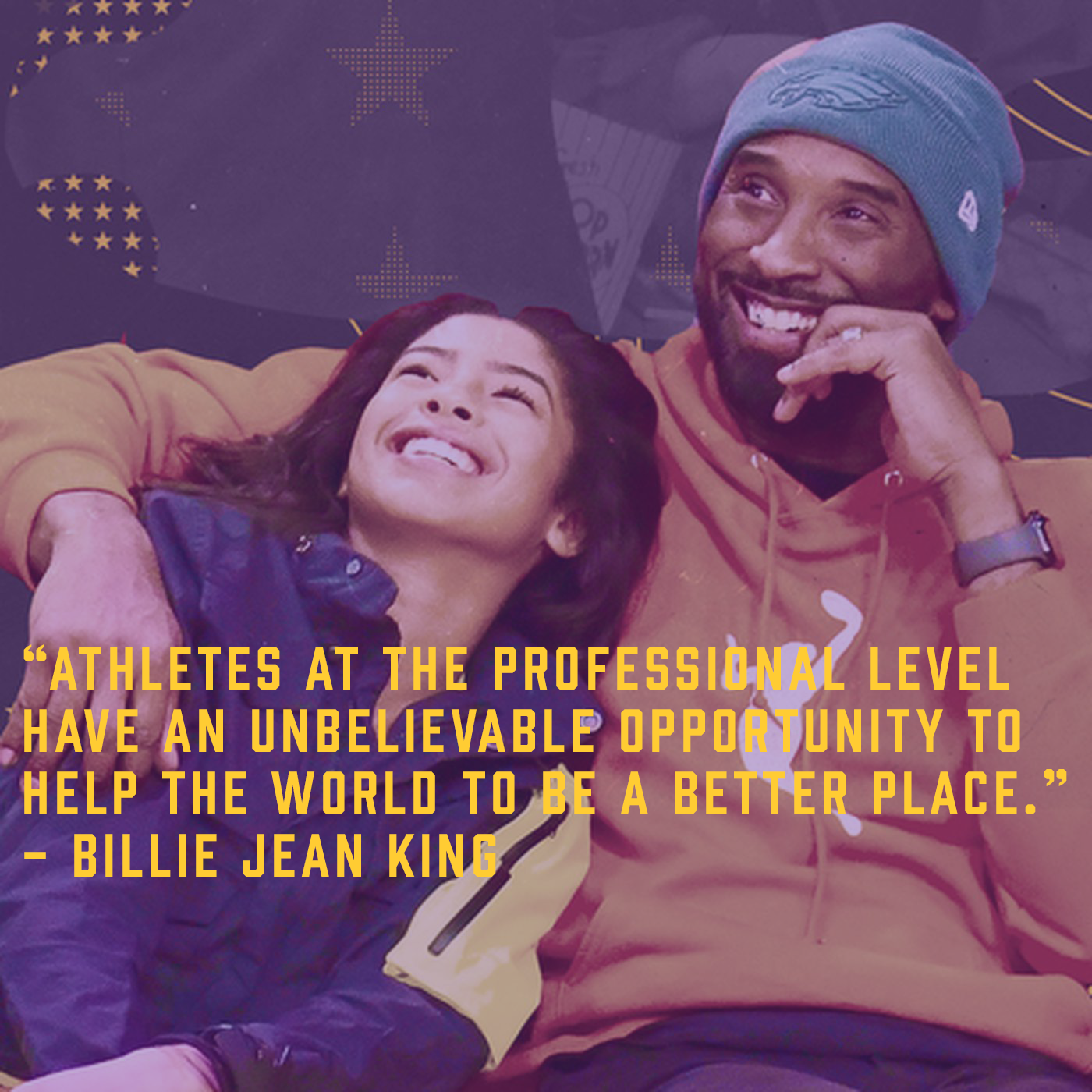 Kobe didn’t just talk and use his global influence to lift up women’s sports he actively worked to help elevate the game through both his organizations and his coaching. One of the objectives of the Mamba Sports Foundation is, “To provide funding for programs that offer equal opportunities for young women in sports.” His coaching style with the Mambas was built on his philosophy that, “As parents of young athletes and coaches, if we are constantly providing the answer for them, they will not be able to problem-solve on their own. Give them the tools to go out and finish.”

Here’s how James Parker, a friend of Kobe’s, described his coaching style

As people look back at Kobe’s legacy, many took the time to mention the impact he’s had in their lives and on the women’s sports community.

WNBA commissioner Cathy Engelbert said, "Kobe's support for the WNBA and women's basketball along with his passion for helping young girls and boys follow their dreams made him a true legend for our sport. We admired him not just as a legendary basketball player, but as a father, a youth coach and a role model for future generations of athletes."

The U.S. Soccer Women’s National Team tweeted a clip of Kobe where he said, “We're here to support the USA women's soccer team. They're the best in the world. Of course, we're here. We've got to show our love and show our support. They're great examples and role models to my girls.”

“He was a caring father, husband, coach, and champion of youth sports. We mourn not only one of the greatest athletes of all time, but an active and engaged member of our community, and a visionary whose impact was only beginning to be felt by society. He will be remembered most for the care he placed and the pleasure he took in educating the next generation, none more so than Gianna, Alyssa, Payton and their Mamba teammates.” - Mamba Sports Academy

Kobe and Gianna Bryant, Alyssa, John, and Keri Altobelli, Payton and Sarah Chester, and Christina Mauser with the help of Ara Zobayan were doing what so many parents do every weekend. They were taking their kids to a sporting event to show their support, to coach their girls, and to have fun.

Kobe has left an amazing legacy from his accomplishments on the court, but we believe that his examples as a father, a youth coach, and a champion of women’s sports will continue to impact athletes for generations to come.

If you are inspired by the work of #GirlDads and youth sports coaches Coach Kobe Bryant, Coach John Altobello, and Coach Christina Mauser, we’d love to hear your #GirlDad coach story in the comments below.

No @NBA player supported the @WNBA or women’s college basketball more than Kobe. He attended games, watched on tv, coached the next generation. We pray for his family. https://t.co/ZhTCxD3sRg

Sport is the vehicle through which we change the world. The next generation is going to carry this world forward.