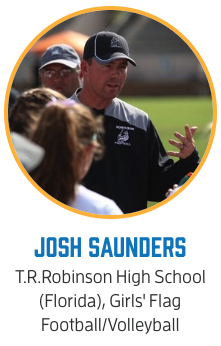 The Double-Goal Coach® Awards recognize coaches who strive to win while also pursuing the important goal of teaching life lessons through sports. The Regional and National awards include $1,000, a certificate, two tickets to a Tampa Bay Lightning game, a suite to a Tampa Bay Rays game, an invitation to PCA’s National Youth Sports & Awards benefit, and recognition within the websites and newsletters of Positive Coaching Alliance (PCA), a national non-profit developing Better Athletes, Better People through youth and high school sports.

“Coach Saunders has built a program that focuses on leadership, confidence and family values,” said Robert Bhoolai, principal at RHS. “Our ladies have learned to be confident in who they are and continue to use those values in life. As a result, they have won 5 of the last 6 Division 1A State Championships. Saunders is a community leader, mentor, and all-around great coach!”

Melissa Mousseau is a peer of Saunders and believes he has been instrumental in promoting the sport of flag football in the community, as well as at the college level. “Coach Saunders’ knowledge of flag football has been noticed by many—he now serves on the editorial board for NIRSA, which is responsible for creating the national rule book for college and recreational sports, and he is also on the committee that creates the FHSAA Flag Football Rule Book.”

Richard Renninger, the parent of a player, said, “Confidence is the single biggest determinate in the positive outcomes in Saunders’ flag football success. He instills a winning attitude [in players] from day one and this newfound confidence carries well beyond the field.  Through their interactions with him, players blossom into confident, outgoing, leaders and advocates.”

Maggie McClintock, an alumni parent, agrees with Renninger. “While the flag football season is 3 months long, the team works year-round. From school clubs to community flag clinics, the importance of what the team does off the field is a top priority. Coach Saunders instills a genuine desire to be involved and make a difference beyond the football field.”

Saunders began coaching flag football at RHS in 2006, the first year it was sanctioned in Florida at a high school level. His teams have played in the FHSSA Flag Football Championship for the past 6 years, winning 5 of them. Off the field, RHS Flag Football is also a 4-time FHSAA Academic State Champion.

Deliah Autry is a former player on RHS’s flag team. “Coach Saunders takes girls who have natural talent and those who don’t and believes in every single one of them in the same way. He teaches his players to never settle for mediocrity. His coaching style is so important, especially for high school-aged teens as they mature and get ready to become adults who potentially go to college.”

“It is evident that Coach Saunders is passionate about coaching and teaching,” said Mason Cathey Brady, Executive Director of PCA-Tampa Bay, the local Chapter of Positive Coaching Alliance. “We appreciate his initiative, philosophy, and care, and are proud to recognize him as a Double-Goal Coach®.

Positive Coaching Alliance named twenty-five (25) National Double-Goal Coach® recipients, each of whom will receive $1,000 and two (2) tickets to the National Youth & Sports Awards in California in April 2020.

PCA resources, which have reached more than 9 million youth, strive to transform high school and youth sports into a Development Zone® culture, where the goal is to develop Better Athletes, Better People and the following become the prevailing models in youth and high school sports: