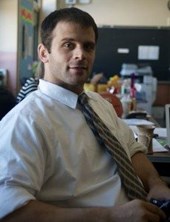 Eassa is one of 50 national recipients of the Double-Goal Coach award, named for coaches who strive to win while also pursuing the more important goal of teaching life lessons through sports. The award includes a $200 prize, a certificate, and mention within the websites and newsletters of Positive Coaching Alliance (PCA), a national non-profit developing Better Athletes, Better People through youth and high school sports.

“Joe helps his athletes win on and off the mat,” said Darrell Johnson, Executive Director of PCA-New York City, the local Chapter of Positive Coaching Alliance. “By creating a positive, character-building youth sports experience and serving as a Double-Goal Coach, Joe helps youth develop into better athletes and better people.”

Eassa impacts a wildly diverse student body that has up to 90 percent of its students receiving free or reduced lunch, a daunting statistic that defines the school’s population as extremely low socio-economic status. In addition to teaching English at the school, Eassa was inspired to start a wrestling team due to the positive impact his own wrestling coach had on him after he started down a wayward path in 8th grade.

“Wrestling changed my life completely,” Eassa said. “I’d been arrested. I was missing classes. Coach Josh asked me to come out, and he gave me a goal and a purpose. I try to do that as much as possible for my kids.

“I keep my numbers kind of small, 10-12 kids, and take them on as family. I talk to their families every week. I sit in their classes; if they don’t have the grades, they don’t wrestle, and they don’t come to practice. This helps me get them to understand the importance of what may seem like little decisions they’re making academically and behaviorally. The biggest thing for me is letting my guys know I care about them, and I’m going to be persistent, and that change is urgent.”

While Eassa is changing individual lives, he also has the chance to impact the life of his community as a whole, especially in terms of building cultural bridges that connect such a diverse population. “As a white guy in Bed-Stuy, I grapple with this all the time,” Eassa said. “Race is a major issue. But I’ve found from my coaching and teaching that as long as you’re there for people, and you’re consistent and give them unconditional love, that bridges cultural barriers.

“We have some refugees from Yemen and a lot of Mexican students, and their (deportation) concerns are very real. It’s been emotional. I tried to be as calm and even-keeled as possible and acknowledge these concerns. You listen. You hear. You try to explain some inaccuracies. At the middle school level, some stuff can get sensationalized. If you come in upset, the kids will do the same exact thing you do. I try to lead by example, and just acknowledge that some of these things that are happening are very scary.”