Positive Coaching Alliance believes that coaches in youth sports are among the most influential figures in the lives of children. A coach who focuses on teaching life lessons off-the-field in addition to winning on-the-field is what PCA calls a Double-Goal Coach. Each year, PCA recognizes coaches who embody this philosophy with the national Double-Goal Coach Award Presented by TeamSnap. Coach Jayne Chapman of H.B. Plant High School received the award in recognition of her work with the girls' lacrosse team, one of just 50 to earn the honor out of more than 2,400 nominees from throughout the U.S. for the 2016 program.

Chapman was nominated by members of the Hillsborough County Lacrosse Alliance (HALAX) board of directors. Jon Levy, president of HALAX, had this to say, “We want to thank Jayne for all of her hard work, dedication, and great spirit that makes her so special to so many student-athletes at Plant High School.”

Chapman’s approach helps explain how she gets the most out of her players. “It’s critical that this not be all about winning," Chapman said. "It’s equally important to create joy for every girl who picks up a stick."

Chapman has played an important part in the development of lacrosse in the Tampa area. Her success as a coach and mentor was highlighted in the nomination materials submitted on her behalf by players, fellow coaches, and league administrators.

“Coach Chapman shows unparalleled dedication to our Tampa lacrosse community,” said J. Bruce McGonnigal, a board member of HALAX. “Her success as a player and coach are the foundation for her continued love of learning and improving her skill-set. Her positive influence goes beyond her outstanding win-loss record.”

Hannah Schultz, who currently plays for Chapman, wrote in her testimonial: “Not once after all of these years have I heard her disrespect the game, an official, parent, or player under any circumstance; especially regarding a call or a player’s performance. She understands that people make mistakes. Coach Chapman strives to uphold the fairness of the game and instill a love for it as well.”

Praise for Chapman came from across Tampa as the news of her award spread. Lanness Robinson, the Hillsborough County Public Schools Director of Athletics, spoke of Chapman's impact on athletics in the area. “I am very pleased that Jayne is being recognized for her commitment to student-athletes. The work that Jayne does to build a positive team culture ensures her players have the skills necessary to succeed not only on the playing field, but also in the classroom and eventually in life.”

It is truly worth celebrating Coach Chapman’s accomplishments and highlighting her as an example to other coaches. As she returns to the lacrosse field this year, it will be exciting to see how she continues to impact the lives of the young women she coaches. Her presence is invaluable to the athletic community of Tampa Bay. 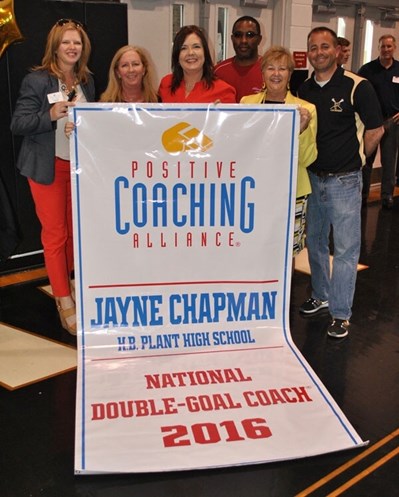