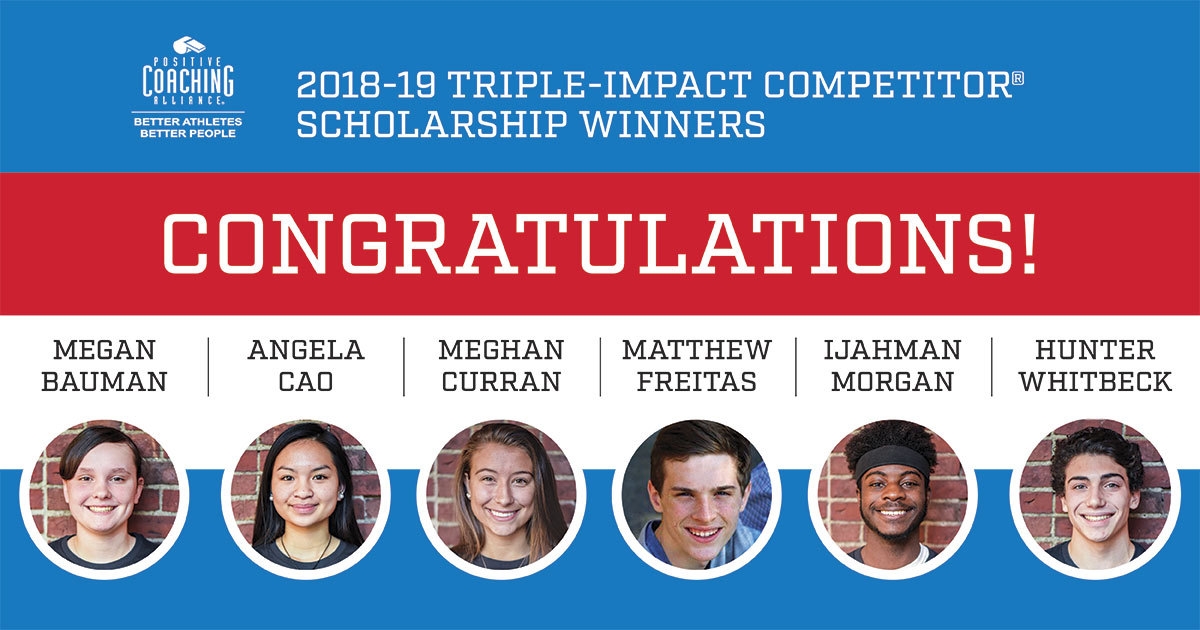 Alongside the six students, PCA will celebrate the positive impact all of its honorees have had through sports--getting girls in the game, inspiring community service and social activism, leading with integrity, and striving to make themselves, their teammates, and the game better. PCA’s 2019 honorees include Kristine Lilly, Devin & Jason McCourty, and Tom Beckett.

More about the students:

Meg Bauman of East Lyme High School in Connecticut is recognized as that rare player who passes first and sees teammates open before they do. Basketball captain since her sophomore year and on her way to set school records, Meg is committed to being the best she can be—seeking extra practice, studying games at every level through WNBA/NBA, and coaching and refereeing youth games. Meg has also passionately pursued community service work, organizing a 3v3 basketball tournament to benefit a food bank and co-founding a sign language club to support an integrated preschool, demonstrating that she is unquestionably a Triple-Impact Competitor.

Angela Cao of Boston’s John D. O’Bryant School of Mathematics and Science is recognized by her coaches and mentors as an all-around incredible student-athlete, teammate and citizen, who rises above, emphatically checking every box. Angela understands the importance of mastery, she works hard in the classroom (English is her second language), on the court, and in taking a leadership role as a middle school coach and Student Ambassador at SquashBusters. Appreciative, curious, and astonishingly humble, Angela is the definition of a Triple Impact Competitor.

Meg Curran of Foxborough High School is an exceptional athlete and leader who appreciates that a team is not a team unless everyone is welcome, connected, and working towards a common goal. Meg gives back to by coaching younger players. Possessing a growth mindset and a work ethic to match, Megan has earned the opportunity to play lacrosse at Princeton and to be named a PCA Triple-Impact Competitor. PCA proudly partners with Foxborough High School and has made an impact with Meg’s team embracing the 5:1 positive to negative ratio all the way to a 17-1-1 field hockey season.

Matthew Freitas of Catholic Memorial High School wrestles and plays lacrosse with passion, character, resilience, and concern for others. Matthew is also a competitive American Ninja Warrior athlete who gives back by coaching kids in a junior ninja program he started. Matthew’s achievements on the field, mat, and obstacle course are exceptional, his work ethic and positivity more so in light of his loss of the lower portion of one leg in a car accident six years ago. Matthew is an inspiration to his teammates and his community, he deserves the title Triple-Impact Competitor.

Ijahman Morgan of Springfield Renaissance School appreciates how sports simulate life. Having overcome adversity off the field, Ijahman appreciates the importance of remaining calm, confident, and disciplined because when there is pressure, in life or in soccer he believes that the most important thing is to have fun, and to make the most of it. Focused, purposeful, and constantly striving to make himself, his teammates, and the game better, Ijahman is the definition of a Triple-Impact Competitor.

Hunter Whitbeck of Acton-Boxborough Regional High School appreciates the value of teammates supporting one another even in the most individual of sports, diving and gymnastics. Inspired by older teammates and marathoner Shalane Flanagan, Hunter has become a leader on his team with a work ethic and drive for success that is matched only by his commitment to sportsmanship and supporting teammates and opponents. Hunter’s dedication to making himself, his teammates, and the game better make him an exemplary Triple-Impact Competitor.