On February 1, Positive Coaching Alliance-New York City hosted its first-ever Triple-Impact CompetitorⓇ Scholarship and Awards Celebration. The event was coined the “Jeans & Jerseys Triple-Impact Awards” and the nearly 150 guests, both adults and student-athletes, were dressed in jeans and their favorite sports jersey at the Simon Baruch Middle School in Manhattan. Activities included a “pre-game” reception that featured a tour of the triple-impact roadmap through video, images and personal testimonials from the chapter’s honorary student-athletes outlining each of the three tenants: personal mastery, leadership and honoring the game. 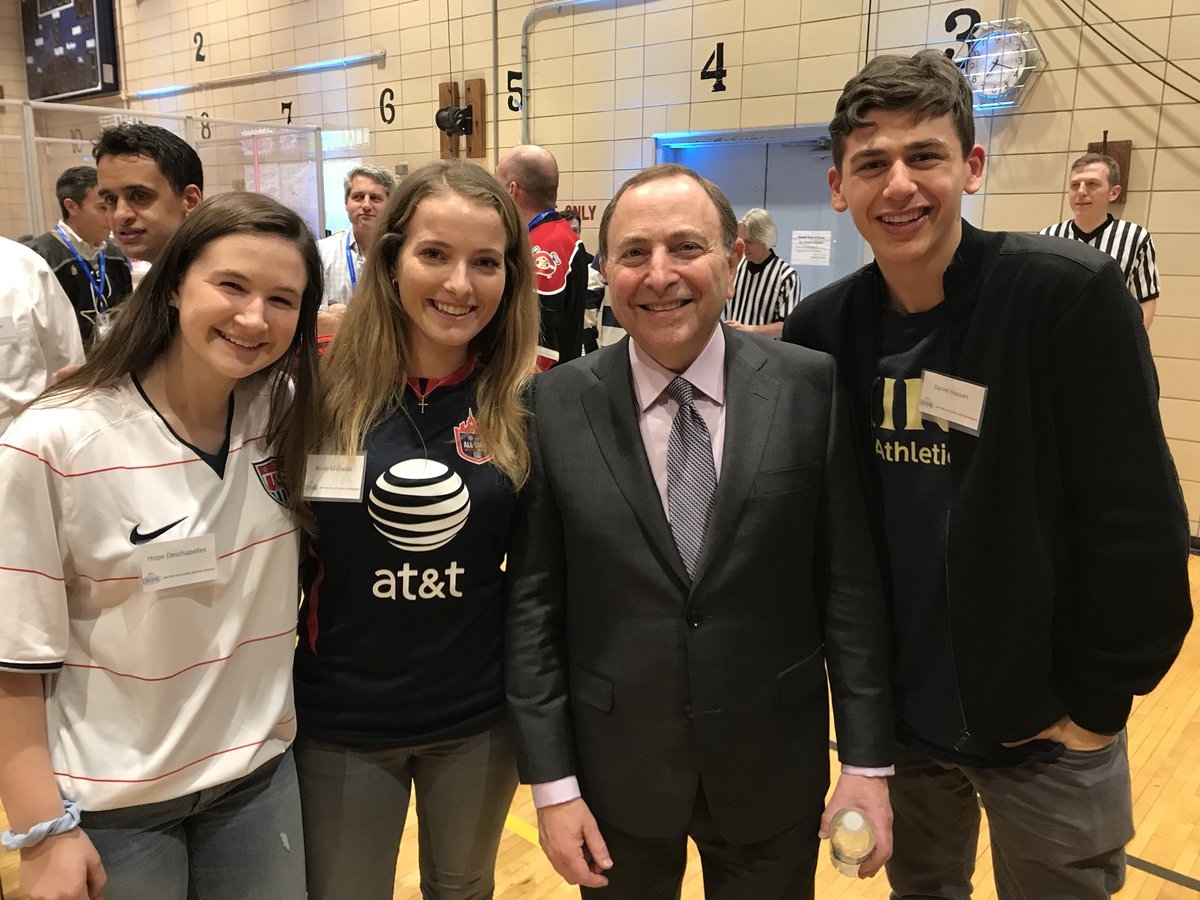 The evening continued with a ceremony honoring two exceptional members of the New York sports and business communities: Gary Bettman, Commissioner of the National Hockey League, and Larry Robbins CEO of Glenview Capital Management. Seven high school student-athletes were also awarded college scholarships and were recognized for their integrity, teamwork, and leadership, on the field, in the classroom, and in their communities. 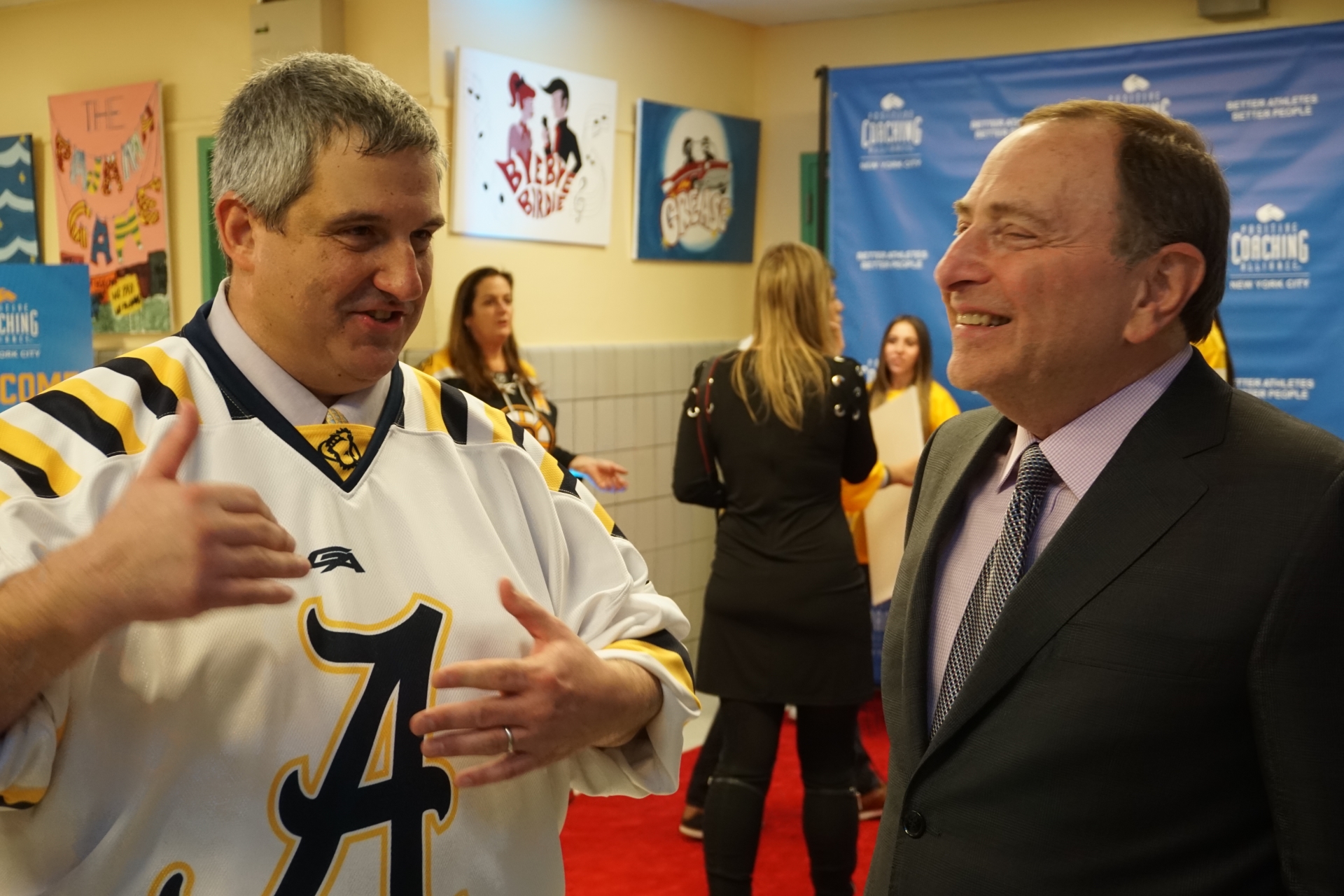 Larry Robbins and Gary Bettman enjoy the event as they are honored with their respective awards.

Commissioner Bettman, currently the longest-tenured Commissioner among the four major professional sports leagues, received the Excellence in Leadership Award for his 25 years of innovative stewardship of the NHL. Under Commissioner Bettman’s leadership, the NHL is at the forefront of new principles that focus on building character, fostering positive values and developing important life skills that transcend the game of hockey. Bettman joined the NHL Network prior to the event to discuss his attendance!

The award was presented to Commissioner Bettman by PCA Founder and CEO, Jim Thompson. Mr. Thompson addressed the crowd stating, “We are here tonight to honor Commissioner Bettman’s leadership qualities that personify the pillars PCA represents– a laser focus on making the game, the players and the team better. Commissioner Bettman’s passion, commitment and unwavering loyalty to the game impeccably depict his synergy with what PCA defines as leadership– courage to do the right thing, commitment to nothing short of excellence, continual improvement and encouragement of others to always do better, but most importantly, to believe in yourself.”

Commissioner Bettman humbly accepted the award, remarking, “We are very proud of the fact that hockey, in particular, is a sport that teaches life's lessons, gives young people an opportunity to get good values from the sport, and when we can connect with an organization like Positive Coaching Alliance, it just reinforces that message.”

Mr. Robbins received the Triple-Impact Executive Award in recognition of his leadership in the investment community, as well as his numerous philanthropic and coaching endeavors.  In business, educational philanthropy and athletics, Mr. Robbins has worked to advance a training and development model that emphasizes both skill and character development as a foundation for team success. Mr. Robbins’ sister, Ellen Robbins, who is on the Los Angeles Board of PCA, presented him with the award.

Mr. Robbins addressed the crowd admitting that while there was no organization like PCA for him growing up playing hockey, he did have some phenomenal coaches that he said “encouraged me along the way who helped me find my identity and my contribution to hockey and that stayed with me.”

He added, “PCA 20 years ago had the foresight to train the trainers and if you think about the scale of that model, almost 9 million kids have benefited from playing on a team over the last 20 years with a coach that got trained on how to be positive and how to connect character and life skills to the sport by PCA and we believe lives have a chance of being better off for it just like in the way that I got positive reinforcement.”

You can watch Larry's full remarks below:

Another highlight of the evening were comments from Triple-Impact Competitor Scholarship Winner, Thomas Cromie, who remarked, “It is such an honor to stand up here tonight with Mr. Robbins, Mr. Thompson, Mr. Johnson and Commissioner Bettman, who are dedicated to improving youth sports and committed to making young athletes better people. I am proud to play a part in this important movement.”

You Can See Highlights Of All Student-Athletes from the presentation at the event below:

The stars of the evening were our seven student-athlete scholarship winners listed below. The athletes sat on stage during the presentation, visible impacted by the wonderful guest speakers and proudly accepted their scholarships:

Darrell Johnson, PCA-New York City's Executive Director, concluded the evening by saying, “growing up as just a kid in the Bronx, myself, I am living proof of the impact youth sports and positive coaching can have on the lives of our chapter’s future leaders and the immense support from each and every one of you is invaluable.”

Special thank you to our Chapter Board, staff, volunteers and sponsors. Larry Robbins (seen here receiving his award from his sister Ellen) was featured in a story on Bloomberg.com after the event.