If You Can See It, You Can Be It 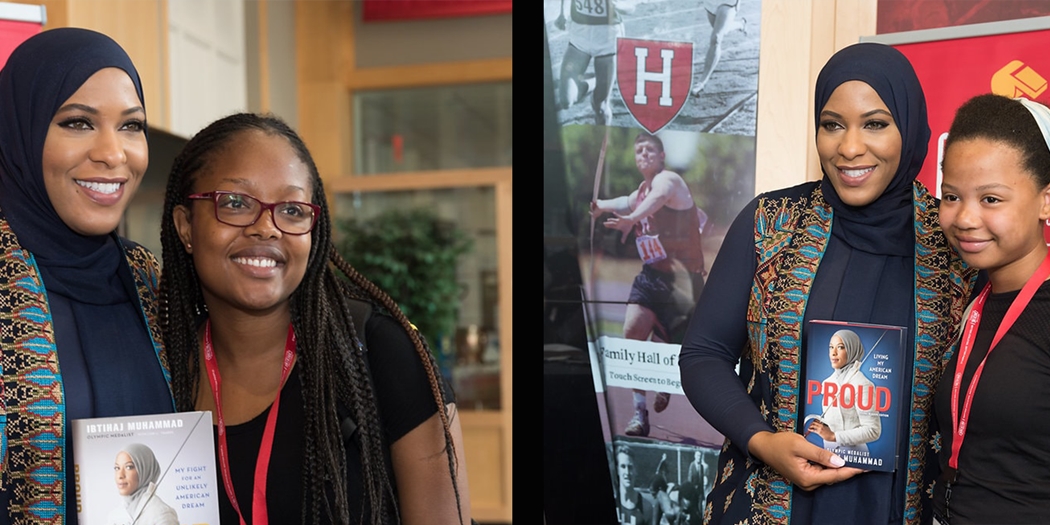 On Friday, August 3rd, Ibtihaj Muhammad threw the first pitch, perfectly, in front of the more than 35,000 people gathered for the Red Sox/Yankees game at Fenway Park and gave meaning to the words “if you can see it, you can be it.”

The crowd at Fenway roared their approval as Ibtihaj Muhammad, with her name emblazoned across the back of her custom Red Sox jersey, threw the ball across home plate. The first black, Muslim American woman to compete in the Olympics for the United States wearing hijab, Ibtihaj Muhammad achieved her dream of winning an Olympic medal in fencing in Rio in 2016 and sparked more dreams on August 3rd.

That moment—when Ibtihaj Muhammad stood on the pitcher’s mound at Fenway Park, both arms raised while images of her exulting in fencing glory and smiling on the cover of her new book flashed across the massive videoboard—was inspiring.

There, she told the group of more than forty people gathered in front of a wall of images of women competing in sports that she is fueled by her belief that “if you can see it, you can be it.”

Midday, Ibtihaj spoke to more than 100 people at Deloitte where she talked about the power of a coach who believes in you, led a fiercely competitive rock-paper-scissors tournament to demonstrate the power of PCA’s positive approach, and coached Deloitte partner and PCA Board chair Mark Melito to fence like Zorro.

Then, on to Fenway Park where Ibithaj was greeted by Red Sox President and CEO Sam Kennedy and CMO Adam Grossman on the field where the Take the Lead anti-racism campaign was formed.

WHO IS IBTIHAJ MUHAMMAD?

Ibtihaj Muhammad is a hero who needs no introduction to members of the fencing and Muslim American communities, and she is becoming a more familiar name now that she has published a book Proud: My Fight for an Unlikely American Dream, Mattel has released an Ibtihaj Muhammad Barbie doll, and she has appeared on ESPN and more this summer. To introduce her, a top 10 list of things you should know about Ibtihaj Muhammad, may help.

HOW DID IBTIHAJ MUHAMMAD SUCCEED?

“I am one of those people who thinks they can do anything.” Ibtihaj Muhammad’s belief in herself has propelled her through challenges and adversity to the pinnacle of athletic accomplishment, an Olympic medal. That belief in herself came from her “growth mindset,” which was forged by her family, her faith, some of her coaches, and the resilience she developed in overcoming adversity.

Ibtihaj’s mother nudged her into fencing after years of modifying her basketball, volleyball, and other uniforms to make them conform to the tenets of their faith. Ibtihaj professes that she was “not very good” when she started fencing, but as a member of 100+ member fencing team at Columbia High School in Maplewood, New Jersey, she flourished in a positive environment where every athlete was valued. Under the direction of Coach Frank Mustilli, that program yielded multiple state championships and was one of the top fencing programs in the nation. Part of the secret to the program’s success? Coach Mustilli believes in his athletes, and gets them to believe in themselves.

Ibtihaj saw herself as an epee fencer for her first few years, but Coach Mustilli saw (or heard) something else when she let out a massive yell during training. Coach Mustilli saw her as a competitive saber fencer. Ibtihaj was reluctant to leave her familiar discipline, but rose to her coach’s challenge. That willingness to see herself differently was the first step in Ibtihaj’s path to success. Ibtihaj’s success has enabled Muslim girls and women see themselves differently, as the hugs and smiles made clear at Harvard. Ibtihaj’s success is also having some impact on the way the world sees Muslim girls and women, as the cheers from the crowd made clear at Fenway Park.

Fundamental to Ibtihaj’s success is the support of her family for her as an athlete, but more importantly for her as a person. Before the Olympics, her father said “she is already gold to me” and her mother described her daughter, whose name means joy, as already a “hero” to Muslim American people. Each chapter in Ibtihaj’s book begins with a quote from a person who inspired her. The quotes, from authors, politicians, and athletes, are a glimpse into Ibtihaj’s motivation. “Just believe in yourself. Even if you don’t pretend that you do and at some point, you will.” Venus Williams. “The triumph can’t be had without the struggle.” Wilma Rudolph.

Ibtihaj’s own words will motivate others. She closes her book with this:

“I’ve had to fight for every win, every place at the table, every ounce of respect on my path to world-class athlete. And I will continue to fight because the prize this time – an America that truly respects all of its citizens – is worth more than any medal. Inshallah: so, may it be.” If you would like to purchase Proud, for yourself or to donate to inspire kids and their coaches in underserved communities, please email Beth Maloney by August 31.

View All Photos From Fenway Park

View All The Photos From The Breakfast

Special thanks to Friends of Harvard Fencing for supporting the Coffee with Ibtihaj Muhammad at Harvard, to Deloitte for hosting a lively conversation with Ibtihaj, and to the Red Sox for inviting Ibtihaj to throw the first pitch.

Thank you to all those who purchased and donated Proud.