How to Handle Mistakes

Adjusting to the new normal that comes with social distancing and homebound restrictions associated with COVID-19 is definitely a work in progress for anyone, let alone young people who suddenly find themselves cooped up in close quarters, facing the demands of remote schooling and having to get used to a drastically altered routine. Coupled with the added anxiety of the situation itself, they will no doubt make their fair share of mistakes each day (we all do!). At Positive Coaching Alliance we understand these challenges but also greatly value mistakes as an opportunity for self-growth.

For athletes, developing a positive and constructive approach to making mistakes is one of the defining attributes that separate those that excel from those that do not. In fact we encourage our players to look at mistakes as opportunities for tremendous personal improvement. What makes this approach so impactful for personal growth is that we find that managing physical mistakes is the same as managing mental mistakes, so they too should be treated that way. 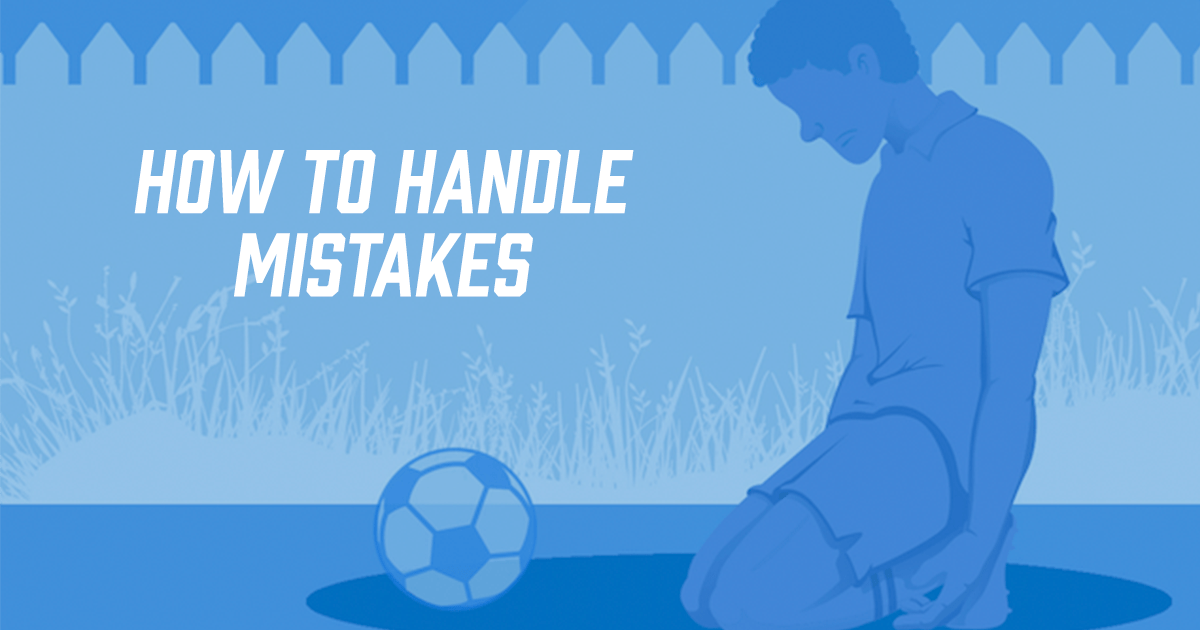 In this post, we will explore two distinct tools for handling and overcoming mistakes that we find are helpful in aiding athletes with mastering their approach. The first “Flushing Mistakes” focuses on dealing with certain types of mistakes that should be addressed in real-time and “Parking Mistakes” which are teachable moments we can provide to players at more opportune moments when they are more receptive to our feedback.

As we develop and gain any new skill, we all go through a period where we do more things wrong than we do right. This is part of what is called a learning curve and when performed in repetition is a critical component in developing mastery of a task or exercise. For these types of mistakes that are natural blips in the iteration process “The Flush” is a particularly powerful mistake ritual. Its purpose is to allow athletes to forget the error and quickly move to the next opportunity, without fearing consequences if they make another error. The more opportunities, the more quickly the skill will be learned and the errors will diminish.

The way “The Flush” works is when an athlete makes a mistake on the playing field, a coach or teammates can simply put their hand above their shoulder and make a motion like they are flushing a toilet.  What this does is let players act out a trigger to mentally reset and put whatever mistakes they made behind them in a manner they can relate to in the real world. This act of wiping the slate clean is critical to helping them physically re-engage on the field in a way that is disciplined and freshly focused.

The power of this mistake ritual has been well documented in the annals of both college and professional sports. For instance, “The Flush” played a major role in Louisiana State University’s successful quest for the 2009 NCAA baseball title. Ryan Schimpf, after hitting a homerun in the Super Regional to beat Rice went on to recount “I had two terrible at-bats previously and I just tried to flush it.”

As you’ve probably witnessed these last few weeks, there are, and will be many challenging bumps in the road for your kids as they work to redefine what success looks like in their newfound realities at home. And by making “flushing it” a part of your every day mistake rituals can provide some much needed relief and distance from frustrations that may be out of their control but no less distracting.

FREE COURSE: SIGN UP TO LEARN MORE ABOUT OUR
FREE ONLINE COURSE FOR STUDENT-ATHLETES

Now looking at the second type of mistakes made, which is less a byproduct of the repetition required to achieve proficiency and more indicative of specific behaviors and actions that reflect a lack of technique, temperament or preparation on the playing field requires a different approach. An example would be athletes that are not conditioned well enough to continue to run hard during the fourth period of a game. These mistakes represent a teachable moment for the coach, where they can work with the athlete to correct the behavior and help them grow as a player. However, in the middle of a game when tensions are at their highest may not be the best time to have a teachable moment.

This is where the idea of a “Parking Mistakes” comes in. When a player makes a mistake in a game you want to remember it so you can prepare the player for a better outcome next time. You make a note of the mistake without saying anything about it at the time, and “park” it where you will remember it after the game so you can address it in practice. When you think about the mistake later, you can try to understand why the athlete made the mistake. It could be he was never adequately taught it. Perhaps it was taught, but she didn’t understand what you asked her to do. Maybe the skill is a complex one and he hasn’t mastered it physically although he understands what you want him to do.

As a parent managing overburdened students in lockdown, “Parking Mistakes” can be a valuable ritual to apply. Especially when faced with long of hours of self teach that were not designed for remote learning, at-home students may become easily frustrated and fatigued and even have some meltdowns. At those moments it is best to simply reward the effort they put in and at a later, more relaxed time in the day, you can provide some constructive feedback to help them be better prepared next time.

One final component that is critical to ensuring the successful practice of these mistake rituals is how we as parents cope with our own mistakes that will most certainly occur as we manage through this crisis. Every good coach knows that how you look at mistakes is how your athletes will approach them in kind. And as their at-home coach subbing in we are looking to you to continue to lead by example as you guide them towards positive social and emotional self-growth.

Life is a team sport, and now more than ever, we need to be good teammates to one another.