August 15, 2019
PCA-Cleveland Event featured on Fox SportsTime Ohio
Our Al Pawlowski served as the moderator for PCA-Cleveland's enjoyable Breakfast with the Indians at Progressive Field this morning

May 13, 2019
PCA-Minnesota Executive Director Troy Pearson interviewed on FOX Sports North
@AnthonyLaPanta was joined by Troy Pearson to learn more about the event and the organization

April 5, 2019
PCA President Tina Syer quoted in Minnesota Post
Is it still OK for coaches to scream at kids?
By Pat Borzi

November 16, 2018
PCA-New England Scholarship Finalist featured in The Sandwich Enterprise
Outside The Lines With Alec Abramson From Sandwich High School

May 15, 2018
PCA featured on The Good Men Project
The Big Picture in Coaching Youth Sports
By Nancy Justis

May 11, 2018
PCA-New England Event featured on FOX25 Boston
The Story of Mia and Maddie

April 25, 2018
PCA-New England Scholarship winners and event featured on FOX 25 Boston
Student-athletes honored for contributions on and off the bench

April 19, 2018
PCA Mentioned in Article by National Advisory Board Member Bill Meehan on Forbes.com
Our Call To Action: Join Together For Social Impact
By Bill Meehan

April 15, 2018
PCA-New England Event Featured in The Boston Globe
See the print ad in the sports section by clicking above

March 5, 2018
PCA and Dove Men+Care Partnership Featured on PRNewswire
Dove Men+Care Joins Forces with Basketball Legends to Showcase the Positive Impact of Care in the Stands This NCAA® March Madness®

January 22, 2018
PCA Founder Jim Thompson featured on CultureFeed
Who we want to be is the key to how we will act
By Jim Thompson

January 2, 2018
PCA Featured in The Washington Post
Why we still allow bullying to flourish in kids sports
By Lisa L. Lewis

December 8, 2017
PCA's Tina Syer featured on Fatherly.com
The Car Conversation: What to Say to Your Daughter After a Big Loss
By Jayme Moye

November 16, 2017
PCA Event with Steve Kerr & Brad Stevens featured in The Mercury News
Brad Stevens on Steve Kerr: “He’s been a very good resource for me”
By Mark Medina

November 3, 2017
PCA Featured on Boston.com
Steve Kerr calls Brad Stevens ‘one of the best coaches in the league’
By Nicole Yang

October 3, 2017
PCA Featured in The HR Daily Advisor
The ‘Power of Positive’: A New HR Method from Sports Coaches
By Florence Richard

October 2, 2017
PCA Featured in Newsday
Talking with kids about ‘taking a knee’ during the anthem
By Beth Whitehouse

September 29, 2017
PCA Featured in The Chicago Tribune
As protests during anthem reach high schools, a 'teaching moment' for some coaches
By Gregory Pratt, Dan Shalin, and Steve Schering

September 28, 2017
PCA Featured in Romper, a parenting site by millennial women for millennial women
How To Talk To Your Kids About "Take A Knee," Because It Isn't About The National Anthem
By Annamarya Scaccia

September 28, 2017
PCA Featured in New Jersey Family
How to Talk to Your Kids About the NFL National Anthem Controversy

September 26, 2017
PCA Founder Jim Thompson Featured in The Gazette
Equal playing time should be the rule in youth sports
By Nancy Justis

September 19, 2017
PCA-Cleveland Featured on Inc.com
The Cleveland Indians and How to Use Adversity to Transform your Life!
By Jim Haudan

September 13, 2017
PCA Featured in US Lacrosse Magazine
US Lacrosse Offer Benefits Beyond Insurance and Magazine
By Paul Krome

September 1, 2017
PCA-Cleveland Event To Be Aired on FOX SportsTime Ohio Throughout September & October
Breakfast with the Indians on FOX

August 8, 2017
PCA Featured in USA Today
Is it bad for a parent to call a college coach?
By USA Today High School Sports

August 7, 2017
PCA-Minnesota Featured in Lonsdale News Review
Tri-City United: Every Student, Every Day - We’re All In
By Teri Preisler

May 17, 2017
PCA Featured in Honolulu Star Advertiser
Coach strives to be the best in memory of his son
By Dave Reardon

May 8, 2017
Football At Fenway Highlighted on VoiceAmerica Radio
Segment on "All Around Sports" highlighting PCA-New England Event
By John Ingoldsby

April 25, 2017
PCA Featured on WISN Milwaukee
‘This is a GAME:’ Little league sign gets national attention
By Associated Press

April 25, 2017
PCA Featured in the The Baltimore Post
‘This is a GAME:’ Little league sign gets national attention
By Associated Press

April 24, 2017
PCA Featured in Milwaukee Journal Sentinel
Glendale Little League sign reminds fans: 'These are kids. This is a game.'
By John Diedrich 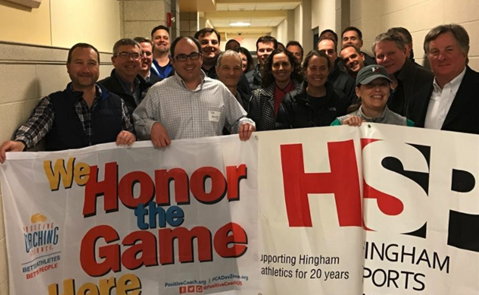 March 7, 2017
PCA Partnership Manager Brandon Whiting Featured on WNEP
The University of Scranton held it's 9th annual Sports Character Conference in conjunction with the Positive Coaching Alliance. The year the focus was on enhancing the sports experience for women.
By Jim Coles

March 6, 2017
PCA National Advisory Board Member Summer Sanders featured on KCRA-Sacramento and in The State Hornet

February 8, 2017
Double-Goal Coach Award Finalist Featured in The Mercury News
Menlo-Atherton football coach Adhir Ravipati recognized for success on and off the field
By Vytas Mazeika

November 10, 2016
Dare To Chill Featured on espnW
Parents, if ever there was a time to ease up on the sideline, it's now
By Dan Shanoff

September 16, 2016
High school coaches must shape the plays, but also the players
PIL Athletic Director in The Oregonian

April 19, 2016
Youth sports coaches learn to mentor on and off the field
by Jonathan Wander, Next Pittsburgh

March 1, 2016
Teach Kids to 'Compete,' and They'll Win Even if Their Team Loses
by Rob Manker, Chicago Tribune/Naperville Sun

February 14, 2016
PCA's Jim Thompson on ESPN's Outside the Lines

February 2, 2016
Despite Its Dangers, Experts Say Football Has Never Been Safer
(Coverage of PCA-SF Bay Area's "The Future of Football: From Pee Wee to Pro")
by Joe Davidson, The Sacramento Bee

January 19, 2016
Managing Technology to Keep You in the Game
by Erica Keswin, The Huffington Post

January 19, 2016
Girls Can Benefit from Participation in Sports
by Nancy Justis, The Gazette (Cedar Rapids, Iowa)

August 25, 2015
The Best Way to Cheer for Your Child
by Sue Shellenbarger, The Wall Street Journal

August 2, 2015
Get Kids Back In Sports
by Jack O'Malley, Op-Ed article in The Scranton Times-Tribune (Scranton, PA)

June 26, 2015
How Long Before I'm the One Attacking My Son's Coach With a Kettlebell?
by Shanna Belott, Huffington Post

May 19, 2015
Some Youth Sports Coaches Need to Hear This Message: You're Doing It Wrong
by Kevin Kleps, Crain's Cleveland Business

May 17, 2015
Positive Coaching Alliance is Making the Call for Change
by Kevin Kleps, Crain's Cleveland Business

May 5, 2015
PCA-Cleveland's Jim Bucci on WCPN Radio's The Sound of Ideas

May 4, 2015
Twins Live Coverage of PCA-Minnesota Breakfast with the Champions
Fox Sports North

March 27, 2015
Business Leaders and Basketball Coaches: They've Got a Lot in Common
by Brian Tuite, PCA-Colorado Board Member, for ColoradoBiz Magazine

March 13, 2015
Finding Acceptance On (And Off) the Field
Huffington Post

February 23, 2015
How Parents on the Sidelines Can Support High School Athletes
by Alexandra Pannoni, U.S. News and World Report

October 23, 2014
Coaching Experts To Pushy Parents: Back Off
by Danielle Braff, Chicago Tribune

October 22, 2014
Allegations of abusive high school coach being looked into by DOE
(PCA commentary in video report from KHON, Honolulu)

October 15, 2014
Put Our Kids In, Coach
by Thomas Farragher, The Boston Globe

September/October Issue
Out of Bounds
by Stacey Colino, Bethesda Magazine

May 7, 2014
This Nonprofit Is Trying To Fix The Adult Problem In Youth Sports
by David McCoy, WCCO-TV, CBS Minnesota

May 5, 2014
Baker not quite ready to punt NFL career
by Reggie Hayes, The News-Sentinel, Fort Wayne (IN)

May 4, 2014
Partnership to train 421 FWCS coaches
by Greg Jones, The Journal Gazette, Fort Wayne (IN)

March 27, 2014
Putting the Fun Back in Sports
by Joy Riggs, Minnesota Parent

March 25, 2014
Rich Kids Are Soft, Poor Kids Need to Be Toughened Up: How Race and Class Affect the Way We Coach our Children
by Stefan Fatsis, Slate