Healing From Harvey Through Sports

After Hurricane Harvey we were all in a state of shock and saddened to see the devastation caused to our neighbors in Houston. Our city is strong, and we are moving along with the recovery process. There are several people however that are still rebuilding. The story I’m about to share will hopefully help take anyone’s mind off of the devastation, at least for a moment.

I was contacted by Palos Verdes Youth Football in California, and they wanted to lend a hand to team that was affected by the storm. I reached out to a few of our community partners throughout Houston and came across The North Houston Rams. This team is based out of the Kashmere Gardens area and have been dealt some unfortunate hands over the years, not just including the recent Hurricane. Head Coach Byron Lacy has dedicated his time to make sure those kids have a safe and healthy environment to compete in year after year. The youth that play in this league feed into Kashmere HS in HISD, which we have partnered with for over 5 years now. 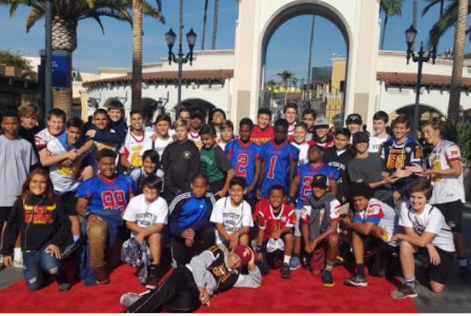 Thanks to tremendous support and community partners in Los Angeles, we created an experience of a lifetime for these 12-year-olds to travel to Los Angeles and play against another youth football team. In addition, they also spent a day at Disneyland and Universal Studios. This was the first time most of these kids have left the Greater Houston Area. To conclude the trip, both teams had a scrimmage at halftime of the LA Rams vs. Houston Texans game that was played on November 12th!

I love getting reminded of the many ways sports make the world a better place. This is one example what sports allows us to do…bring communities together and create lifetime memories for everyone.

I also owe a huge thanks to the directors at Palos Verdes Youth Football-they are the true definition of Better Athletes, Better People. Your donations will help PCA-Houston continue to grow partnerships for teams like this and others around the city. Your donations will help PCA-Houston continue to grow partnerships for teams like this and others around the city. Albert "AJ" Johnson is the Chapter Executive Director for PCA-Houston.  As CED, AJ is responsible for the success of the PCA-Houston Chapter. AJ graduated from Southern Methodist University with a business degree in Management Information Systems. He went on to play eight years of Professional Football in the NFL, NFL Europe and the CFL.