The message below was recently sent to the Positive Coaching Alliance-Minnesota office and speaks volumes. Enjoy!

I just wanted to share a couple positive things about our organization I noticed over the past weekend.

Most of us have been around the rink our whole lives.  We see things that trigger every emotion possible while being around hockey.  This weekend...like many...was a roller coaster for the Bantam Red team.  Most importantly, lots of learning was done.  Hockey is gracious enough to give us many second chances and we were able to make the weekend a good one.

The thing that stuck out to me the most though was a situation that happened while I was watching the Angels PeeWee Black team.  It was the first period and a Fargo Freeze player came down the wall, cut across the middle and put the puck past The Fargo Angels goaltender.  It trickled across the line but was quickly pulled out.  The angle the ref was at didn't allow him to see it go in.  The freeze players celebrated but the goal was not allowed until the Fargo Angels goalie, himself, went up to ref and told him it in fact had crossed the line.

It caught me off guard.  Growing up as a goalie myself...I would do anything to keep a puck out of the net.  This same situation happened to me a few times and I never said a word.  I have no idea who won or lost that game Saturday night, but I know the Angels organization, The Angels Goalie, his coaches and teammates did even better than winning.  They showed how the culture and sportsmanship in this Angels Hockey organization should be taught.  It made me tear up a bit and I had to leave the rink for a minute.

That is what this organization is all about.  Teach life and sportsmanship first....then enjoy the wins when they come.  Most importantly...always learn.  None of us know everything.  The minute you as a coach stops learning...the kids will stop learning.

I also just want to give a shout out to the PeeWee White coaches.  It’s so rewarding seeing kids Greg and I coached now being leaders behind the bench themselves.  Every time I see the PeeWee White team...they are having fun and being coached and they are all learning while doing it.  Keep up the great work and keep contributing to the great culture we are trying to build here. Go Angels! 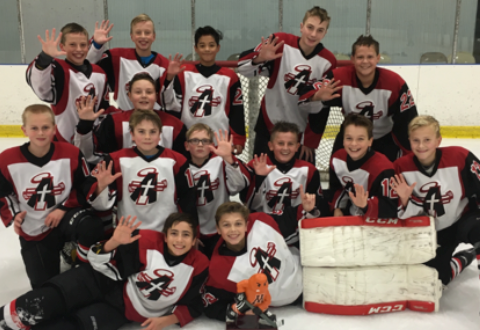