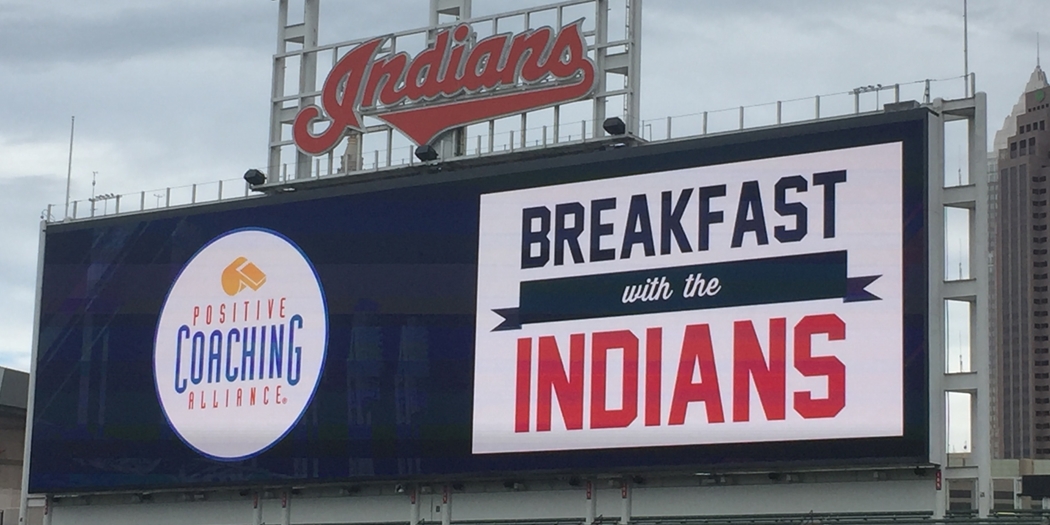 Over one hundred youth, high school, and collegiate coaches received invaluable tips and candid advice about skill and character development from key members of the Cleveland Indians front office staff, at the August 16th PCA-Cleveland Breakfast with the Indians, presented by University Hospitals Sports Medicine. The event also honored two local coaches for their contributions to their teams and community impact, and helped raise awareness about the mission of Positive Coaching Alliance (PCA) in Cleveland. The breakfast raised nearly $30,000 that will support PCA workshops and resources for coaches, administrators, parents and student-athletes throughout Northeast Ohio.

The capacity crowd at The Corner at Progressive Field was treated to a panel discussion, sponsored by the Cleveland Indians and Adcom, featuring Cleveland Indians President of Baseball Operations, Chris Antonetti; Director of Player Development, Carter Hawkins; and Manager of Youth Baseball Development & Initiatives, Matt Kata. FOX Sports Ohio broadcaster Jeff Phelps moderated the discussion which covered topics ranging from how the Indians identify major league talent to how the organization maintains a consistent approach to motivating and developing players at all levels, including through its initiatives related to youth baseball.

Several key themes of the discussion highlighted the importance of creating a culture that is conducive to player development, especially how a team deals with pressure and defines success.

Matt Kata, former Major League Baseball player and Indians Manager of Youth Baseball Development & Initiatives, added that what helped drive him throughout his professional career is similar to what he emphasizes with the kids he works with today. “Redfine success. It’s an achievement of a process,” and that, “Praising effort versus outcomes is a key to minimizing pressure.”

Questions about how teams identify major league prospects prompted some candid advice from Antonetti and Carter Hawkins, Indians Director of Player Development, who stated, “At some point you have to specialize…but it’s not when you’re 12.” Antonetti also added that focusing on one sport year round can actually slow development in young athletes. 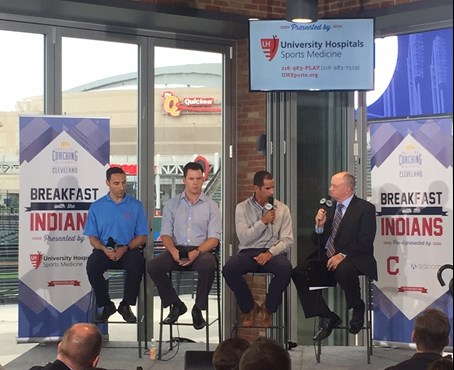 Todd Deutsch, baseball coach for the Hudson Baseball Association received the PCA-Cleveland Diamond Coach of the Year Award, presented by Adcom. The award recognizes an outstanding baseball or softball coach who inspires, leads and uplifts youth or high school student-athletes through positivity and mastery of the sport. As head coach for the Hudson Explorers 9U baseball team and assistant coach for the Explorers’ 7U baseball and 10U softball teams, Todd was honored for his uncommon commitment to creating a positive culture that focuses on developing better athletes and better people.

And finally, Matt Englander, head baseball coach at Case Western Reserve University, received the PCA-Cleveland Luminary Award, presented by Adcom. This award is presented to a coach or administrator who has transformed a community, team or institution through inspirational leadership, unwavering commitment and impactful results. Through Matt’s public battle with brain cancer and his unwavering commitment to his team, his family, and to his health, he epitomized remarkable selflessness, integrity and service to others.

“The insights shared by today’s panelists and the remarkable example that Todd and Matt have set reinforce the importance of sports,” shared Marty Mordarski, Chapter Executive Director of PCA-Cleveland, “not only in the physical development of young people, but also in the development of their character.”

This breakfast was an extension of Positive Coaching Alliance’s mission to develop better athletes and better people, and was one in a series of events hosted by PCA-Cleveland featuring the best and brightest minds from the Cleveland sports scene sharing trade secrets about player skill development, coaching techniques and program philosophy in a fun and informative way. For more information about other upcoming events and PCA-Cleveland, visit cleveland.positivecoach.org.

The Breakfast with the Indians, presented by University Hospitals Sports Medicine, will be featured on SportsTime Ohio on Friday, August 26th at 5:30 PM. Check local listings for channels and more details.