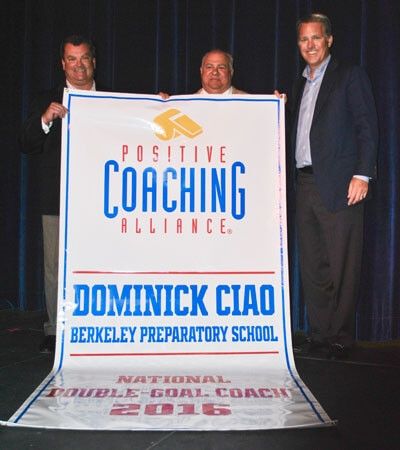 “I am thrilled that Dominick is being recognized in such a deserving way,” said Bobby Reinhart, Athletic Director at Berkeley Preparatory School. “Dominick is so much more than a football coach.  He’s a mentor, a pillar of support, and a lifelong friend of everyone he coaches.  I applaud PCA for the initiative to honor coaches like Dominick Ciao nationwide.”

The 25+ years of professional and high school coaching experience Coach Ciao possesses highlights his success on the field and ability to consistently produce results. However, the impact he has had on his players over those years reaches well beyond the football field.

Former Tampa Bay Buccaneers Coach Greg Schiano spent time working with Coach Ciao and was impacted by the way he  treated all of his players. “Each and every player, including my sons, would say that Coach Ciao cares about them as people, not just as players,” said Schiano. “As I return to college coaching having worked with Dom, I know I return a better prepared coach both on and off the field.”

The life lessons players learn under Coach Ciao go far beyond the field and will benefit them after their careers are over. "The way I treat people today is because of his teachings on being thoughtful and knowing that to be truly special is to be selfless," said Nelson Agholor, current member of the Philadelphia Eagles and a former Berkeley Buccaneer. "He is a father figure to so many young men and ladies who have been around him.”

Monte Kiffin, a former NFL coach known for implementing the now famous “Tampa 2” defense, was also among the many who recommended Coach Ciao for this year’s award. Wrote Kiffin: “All the players that have played for him absolutely think the world of him, and after graduating many return time and time again to see him. A number of them have returned to coach with him after they finish college.”

Of his own approach to coaching, Ciao said, "Our philosophy here has always been that no win is more important than our players.”

This sign alone proves the strength of Ciao’s character. His understanding of the role sports plays in the lives of young athletes is what has allowed him to garner such strong support from the community, and is why he stands out as a 2016 Double-Goal Coach Award winner.