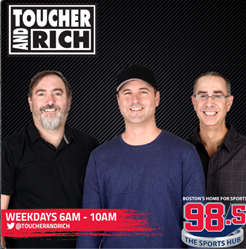 PCA made a big impact on Fred Toucher of Toucher and Rich on 98.5 The Sports Hub.  Fred is coaching a youth basketball team this winter, and he attended a PCA/Celtics Jr NBA workshop to prepare.  The workshop, delivered by PCA Trainer Erik Johnson, former Boston College Women’s Basketball Coach and Managing Director at the Bulfinch Group, made such an impression on Fred that he brought it up on air the next two days.

Fred made good use of the knowledge he had gained to quiz Celtics GM and President of Basketball Operations, Danny Ainge, on the 5:1 ratio (of positive comments to constructive criticism), Brad Stevens’ coaching philosophy, and its impact on Aron Baynes’ 3-point shooting ability.  Danny Ainge praised Brad Stevens’ coaching, and noted that Brad’s coaching was so good that Aron Baynes is now leading the league in 3s, in Phoenix.  We have an audio clip of that part of the show here (from November 14, 2019, hour 4 at 1:30 - 3:40), and you can read a few excerpts of the fun Fred and Danny had on the show below.

Fred: The Jr. Celtics came and gave a 3 hour presentation that I attended on Tuesday evening.

Fred: There was a guy from the PCA [Erik Johnson] who spent the end of the regular season and playoffs with you and Brad and had a lot of positive things to say.  I will tell you one thing he said, we can talk about this, I think it’s interesting. . . [Brad Stevens] used the 5:1 – Danny, what’s the 5:1?

Danny: I have no idea

Fred: Alright, well, you call yourself a coach. 5:1 is 5 compliments to 1 negative thing.

Fred: Phil Jackson made it up but he’s a hippie.  [Brad Stevens] wanted Baynes to shoot 3s, and that when he was watching these practices, Baynes had terrible form, he was all over the place but due to Brad’s confidence in him Baynes became an adequate 3-point shooter.

Danny: Yeah, Baynes is leading the league now as a 3-point shooter in Phoenix.

Fred: My question is, is Brad’s coaching style, that you wanted him to shot 3 pointers, was his coaching style, he has that effect on players his positivity and the way he coaches in practice . . . gives these players the confidence to try things out of their comfort zone.

Danny: Yes.  Absolutely.  Brad has a very positive-oriented coaching style.  He does not like to have players thinking too much about shot selection.  He wants to give them the freedom to play and feel free.  Baynes as a 3-point shooter is a perfect example of that.