When 10-year old “Gronk-in-training” Dominic caught the football tossed to him by Jason McCourty, the crowd celebrated like it was Gillette Stadium on a Sunday for a Patriots game even though it was the InterContinental Boston’s elegant Abigail Adams Ballroom on a Thursday night for PCA’s 2nd annual JEANS + JERSEYS: Positive Impact Celebration. Dominic was one of many PCA supporters who brought home a football or soccer ball signed, tossed, or delivered to them with a hug and a thank you from three of the evening’s honorees Devin and Jason McCourty and Kristine Lilly. (You can see Dominic’s catch and more below on WBZ-TV 4.)

Dressed in colorful jerseys beneath glittering chandeliers, PCA supporters gathered together to celebrate ten honorees—Kristine Lilly, Devin and Jason McCourty, Tom Beckett and six student-athletes—for the positive impact they have made through sports in an evening filled with laughs, cheers, applause, and spirited conversation as the honorees’ shared their experiences touching on the evening’s big themes of teamwork, resilience, effort, caring, and relentless positivity.

Noting that 40 million kids play sports in the US, Beth shared that “the only place you will find more kids is in the classroom. Here at PCA we believe that sports, when done right, are an amazing classroom. Sports can fuel positive youth development and social emotional learning. Put simply—done right, sports are an incredible opportunity for us to raise strong, healthy, gritty, resilient kids who care about one another and the world.” 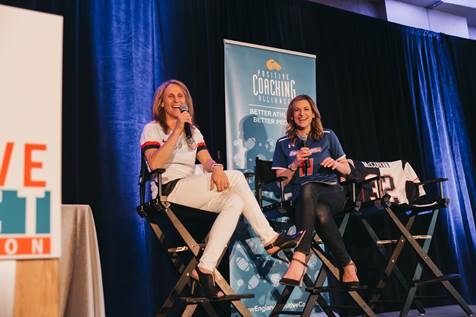 US Soccer and US Olympic Hall of Famer Kristine Lilly accepted PCA’s 2019 Positive Impact LEGEND award after being introduced with a highlight video (below) featuring clips from the 1999 World Cup through the 2019 Team First Soccer Academy clinic in Iraq and a fan-made Boston Breakers banner reading “LILLY IS LEGEND.”

Interviewing Kristine about her experience as a member of the 99ers, then and now, as a coach, and as a sports parent herself, was Sarah Wroblewski of WBZ-TV 4, a former UMass Lowell Riverhawk soccer player and Patriots super fan. Throughout the interview, which was both playful and deep, Kristine focused on teamwork and appreciation for her teammates. Asked about her game-saving header Kristine confessed that heading was not the best part of her game, and acknowledged that it felt great when she put her PK into the back of the net to put her team, the US, in the lead. Celebrating the approach of the 20th anniversary of the watershed moment in women’s sports when the team won the Women’s World Cup in the Rose Bowl before 90,000 cheering fans with 40 million more watching on television, Kristine talked about how special it was “to be part of a team that wanted to be the best, that pushed each other.” Kristine set the standard for fitness on the USWNT for 23 years, setting a standard even Tom Brady could, and does, admire. Kristine encouraged the audience “to appreciate what you are a part of and continue to surround yourself with people because you can’t accomplish anything alone; surround yourself with people to support you to be great.” Thanking the coaches in the room for their effort and commitment, Kristine urged coaches to “embrace having fun.” Asked why she choose to be a part of PCA and its National Advisory Board, Kristine answered because “PCA’s mission is spot on--helping young athletes to be better people.” 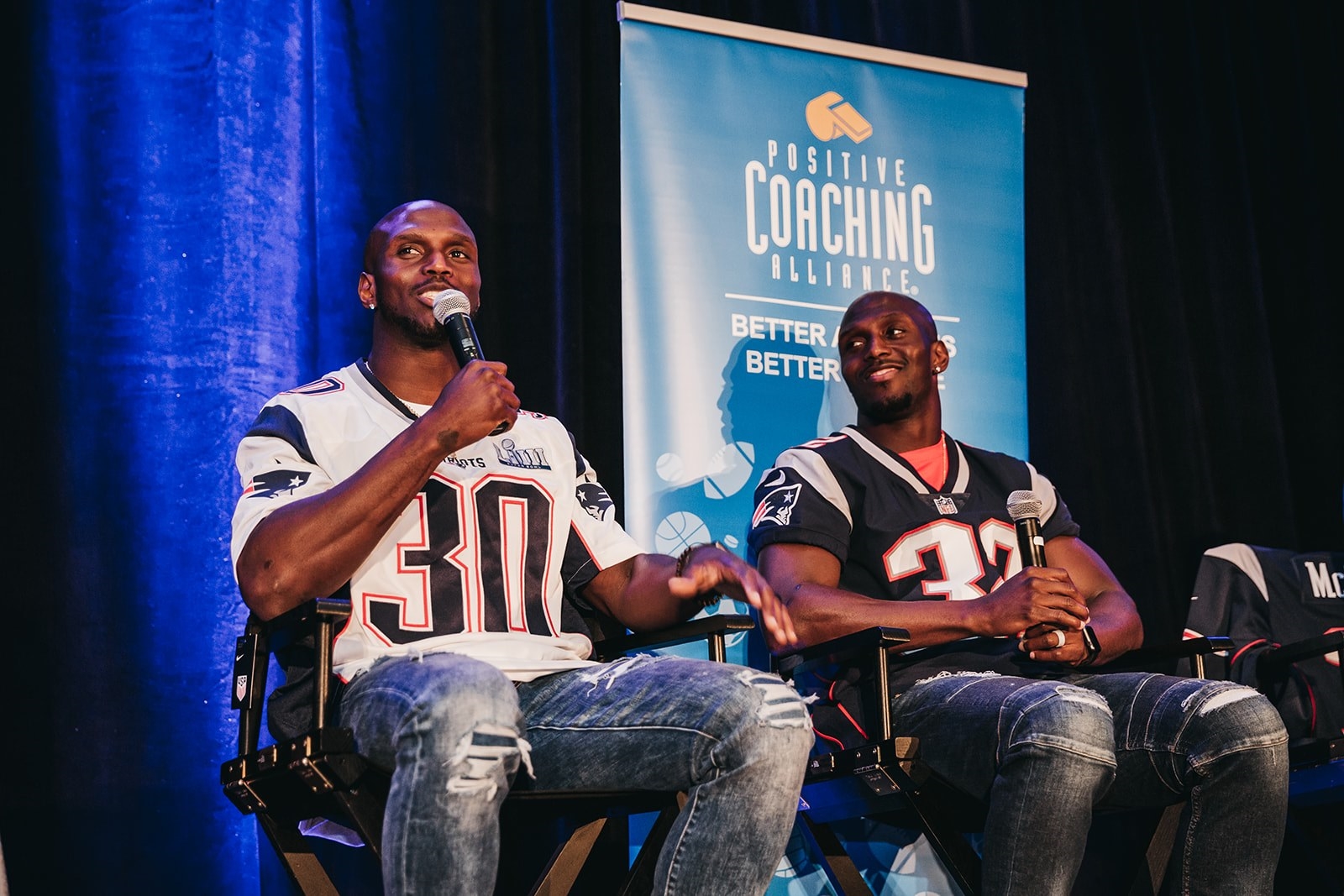 Super Bowl champions and Super Heroes Devin and Jason McCourty were introduced by Boston Medical Center President and CEO Kate Walsh. Kate shared the impact the McCourtys have had in raising awareness of sickle cell disease, a disease which is underfunded, not well-understood by many, and, in Africa, kills more than 50% of the babies born with the disease. Through their Tackle Sickle Cell campaign and their fundraising—including more than $600,000 for the BMC’s Center of Excellence in Sickle Cell Disease alone, running 5Ks and blood drives, the McCourtys have made a real difference in the lives of people fighting the disease, and their families. Kate took the McCourtys’ now famous tagline #MamaWeMadeIt and, in recognition of the impact the McCourtys are having, suggested it should be #MamaWeMadeItHappen.

The McCourtys each accepted a PCA 2019 Positive Impact HERO award after a showing of their highlight video featuring a few big plays on the field and more clips of their work off the field. The McCourtys’ interview with Sarah ranged from light-hearted to serious, and was punctuated by twin-to-twin ribbing, as they talked about joy, success, hard work, resilience, and the importance of family in sports, and in life. Both McCourtys talked about how the challenges they overcame playing sports strengthened them and their resolve to succeed, and to make a positive impact on others. Laughing that at 5’ 11”” basketball was not an option, the McCourtys shared their college recruiting experience—including how Boston College offered Jason, but missed Devin, and what they learned from the paths they took together, and separately.

Praising Devin’s work ethic, and acknowledging his own path from Pop Warner to high school to Rutgers alongside his twin, to Tennessee and Cleveland on his own, and finally to the Patriots and that Super Bowl win in 2019 alongside Devin again, Jason had sage advice “don’t let comparisons take away your joy.” Jason encouraged the audience to redefine success and see that success is always changing, and to always work your hardest. Sports teach you that “you cannot fall short and get outworked.” While Jason talked about the lessons learned from losing, a ten-year member of the Patriots with three Super Bowl rings who was named All-Pro as a rookie, Devin smilingly replied that “You learn a lot from winning.” Jason counselled resilience saying “Sports is so much bigger than activities on the field. Football has taught me so much. There are going to be things in life that knock you down. Sports gives you that ability to get back up.” In football and life, the key is resilience—learning how to get back up.

The McCourtys both talked about the Patriots’ famous winning culture, and acknowledged the importance of mentorship and teamwork. Sharing that Tom Brady introduces himself to every new player on the roster, even though they all know who he is, the McCourtys appreciate the Patriots’ team culture.

Most importantly, the McCourtys talked about what it meant to them to be able to give back to help people who battle sickle cell disease, like their Aunt Winifred who passed away after fighting the disease for 69 years. They credited their mom with teaching them to be good teammates and good men. Bringing Mama McCourty, Phyllis Harrell, in her split 30/32 twin jersey on stage, to share her secret with the parents in the audience, she encouraged parents to simply help “find out what your children enjoy and support them, encourage them, and make sure they are safe.” 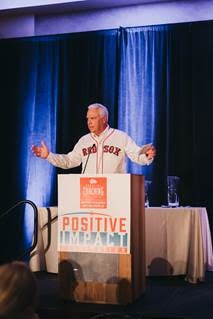 Next up was Tom Beckett, Yale Athletic Director Emeritus and longtime PCA National Advisory Board Member, whom PCA introduced with a highlight video featuring Yale coaches and staff, plus high school classmate Larry Lucchino talking about the positive impact Tom had on them, and on Yale in his 24 years at the helm. Tom accepted PCA’s 2019 Triple-Impact Executive award in recognition of the positive impact he has had throughout his career.

Proclaiming that “PCA is a powerful movement,” Tom’s words resonated with the audience. Tom shared that “when we are positive with our young people, when we work hard to let them know the good things they are doing, it is remarkable the impact it has on their lives and how they then go on to change and impact their community.” 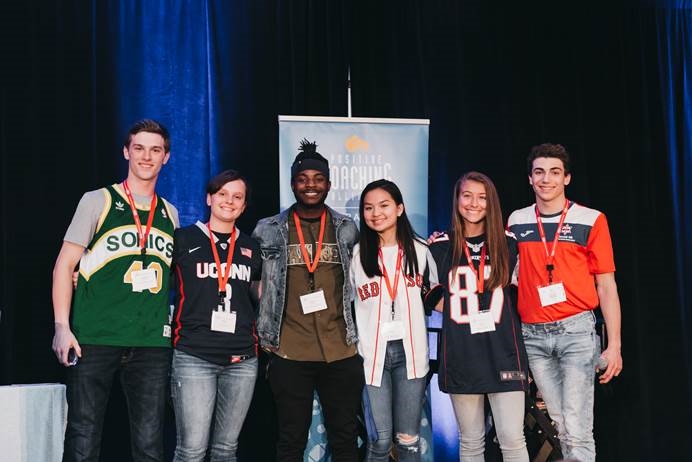 The final group of honorees of the evening were six exceptional high school seniors—Megan Bauman, Angela Cao, Meg Curran, Matthew Freitas, Ijahman Morgan and Hunter Whitbeck—awarded Triple-Impact Competitor scholarships by PCA for striving to make themselves, their teammates, and the game better. Telling their stories first through an introductory video, the six climbed on stage and one-by-one told the audience what sports taught them.

Meg Curran shared in depth how her field hockey team had gone 17-1-1 and deep in the playoffs after embracing the 5:1 ratio of positives to negatives they had learned in a PCA workshop at Foxborough High School, a longtime PCA partner. Meg pledged that the principles she learned from PCA about how to play the game and how to live her life “will be with her forever.”

The final speaker of the evening, Matt Freitas, proved Tom Beckett right on the power of coaches to impact kids. Matt quoted his coach who had instilled in him that “how you do anything is how you will do everything.” Having lost the lower half of his right leg in a car accident 6 ½ years ago, Matt inspired the audience with his words that “one thing sports has taught me is that I need to attack everything with as much positivity as possible.”

Before the final whistle on the evening, Kristine Lilly and the McCourtys joined event co-chairs Tracy DeForge and Mark Melito for a raucous Fund-A-Cause, with autographed footballs and soccer balls going to PCA supporters—including that football to 10-year old Dominic aka “Gronk-in-training,” in acknowledgement of their support of PCA’s mission to ensure that kids get and stay in sports to develop the character, leadership, grit, teamwork, resilience, effort, caring, and relentless positivity they need to succeed on the field, and in life.

Thank you for your support of PCA’s May 16th 2019 JEANS + JERSEYS: Positive Impact Celebration. Our scholarship winners celebrating on-stage with the McCourtys and Kristine Lilly in their new audio sunglasses, Bose Frames. Enter the “best jersey” contest by posting a picture (or two) of yourself at the event in a jersey and tagging PCA on Twitter, Facebook, or Instagram with #BestJersey2019, or simply email us your photo BY JUNE 1ST AT MIDNIGHT. Click below to view more images from the event.