ATHLETES, COACHES, PARENTS: WHAT’S YOUR WHY?

Maddie Potts was a seventeen-year old senior at Chariho High School who collapsed on the soccer field and died of a brain aneurysm in September 2017, in her tragically short life she exemplified all that PCA stands for.

Notes from the Maddie Potts PCA Symposium at Brown University

With spring finally in the air, on Sunday, March 24th more than 60 athletes, coaches, and parents gathered to make themselves, their teams, and the games they love better and to honor Maddie Potts.   The Positive Coaching Alliance (PCA) together with Brown University, its coaches and student-athletes, presented workshops and a series of panel conversations at the Maddie Potts PCA Coaching Symposium.

Maddie Potts was a seventeen-year-old senior at Chariho High School who collapsed on the soccer field and died of a brain aneurysm in September 2017, in her tragically short life she exemplified all that PCA stands for—young athletes striving to make themselves, their teammates, and the game better with a positive mindset. Many of us now refer to that positive mindset as the #MaddieMentality. 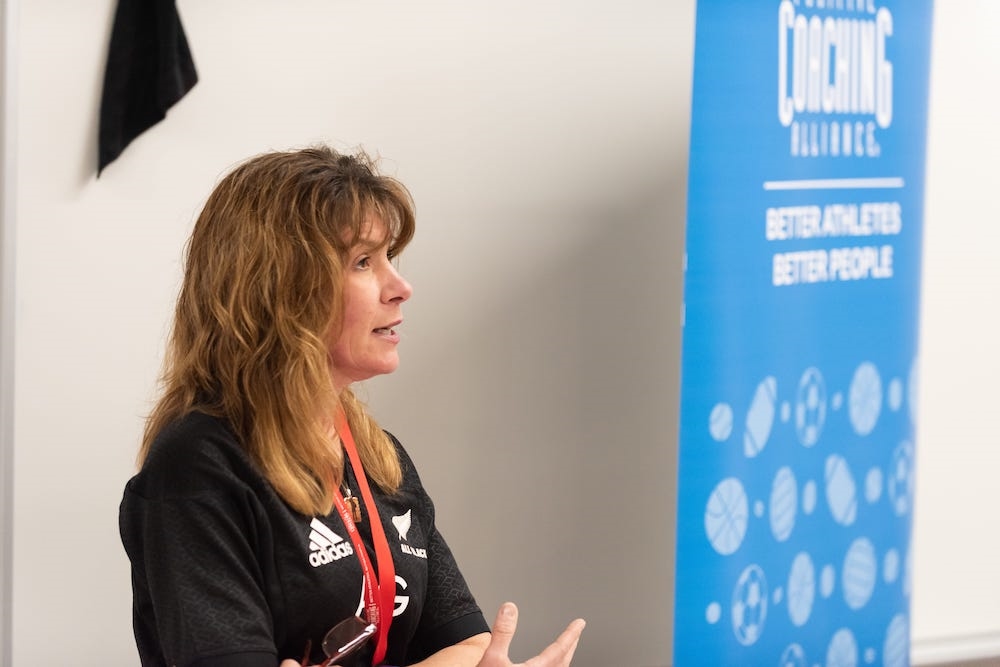 The afternoon began for parents and coaches, in Brown’s Paul K. Sloan Football Meeting Room with a welcome from PCA-New England Executive Director, Beth O’Neill Maloney, who introduced Stephanie Potts, Maddie Potts’ mother and co-founder of the Maddie Potts Foundation. Stephanie shared her daughter’s story and the arc of her athletic experience--struggling under a difficult coach, being cut from a team fueling her motivation to improve, becoming a leader as a captain of the Chariho varsity soccer team, and writing empowering letters to teammates. Reading aloud from one of Maddie’s letters to a younger player, Stephanie inspired everyone in the room. Maddie’s words were:

"You are an incredibly strong girl and I have 100% confidence in you that you can persevere. . . Never doubt your abilities . . . you are just as good if not better than every other girl out there . . . If you are on the field and you couldn’t get to the ball in time, don’t think “I should have gotten to that ball,” think “I’m going to get the ball next time,” because there will always be a next time. Having a positive mindset is the only way to navigate you through life and the soccer field. Always think that you are the best player on the field because you are. . . . If you think negatively it will affect your play, that’s what happened to me in the past and this is how I helped change the person I am today. Never doubt yourself." 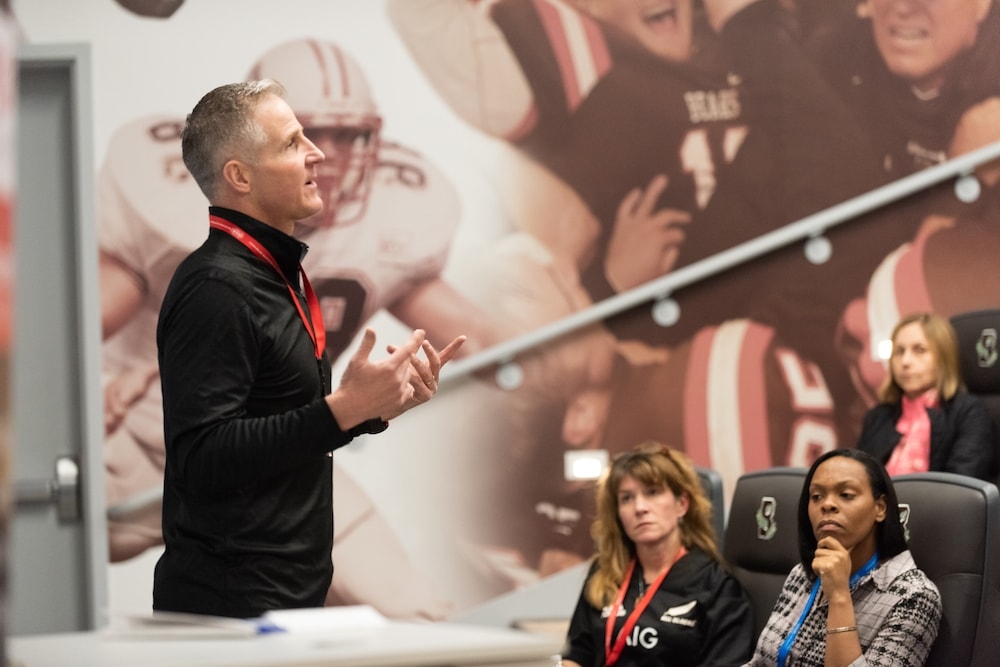 PCA Trainer, former Boston College Women’s Basketball Coach, and Managing Director at the Bulfinch Group, Erik Johnson then delivered a highlight-filled PCA workshop encouraging coaches to examine “what is my why” for coaching, and sharing that, in 24 years of college basketball coaching, his “why” was to “help create the best human beings possible.” Embracing the idea that coaches can absolutely be passionate about winning and still be positive, Erik demonstrated first a negative and then a positive coaching scenario. Erik acted out the all-too-familiar way a frustrated coach shouts at a player who misses a simple lay-up, and then pivoted to show how a positive coach encourages, refocuses, and engages that same player so she believes in herself and makes the next lay-up. Erik shared his mantra “if you see something positive, say something positive.” Erik shared many of PCA’s main concepts—the need to fill emotional tanks, the all-important 5:1 ratio of positive to negative feedback (citing Brad Stevens as a role model), and the importance of effort, learning, and creating a mastery climate where mistakes are part of the learning process—adding powerful stories from his many years of coaching and sports parenting. 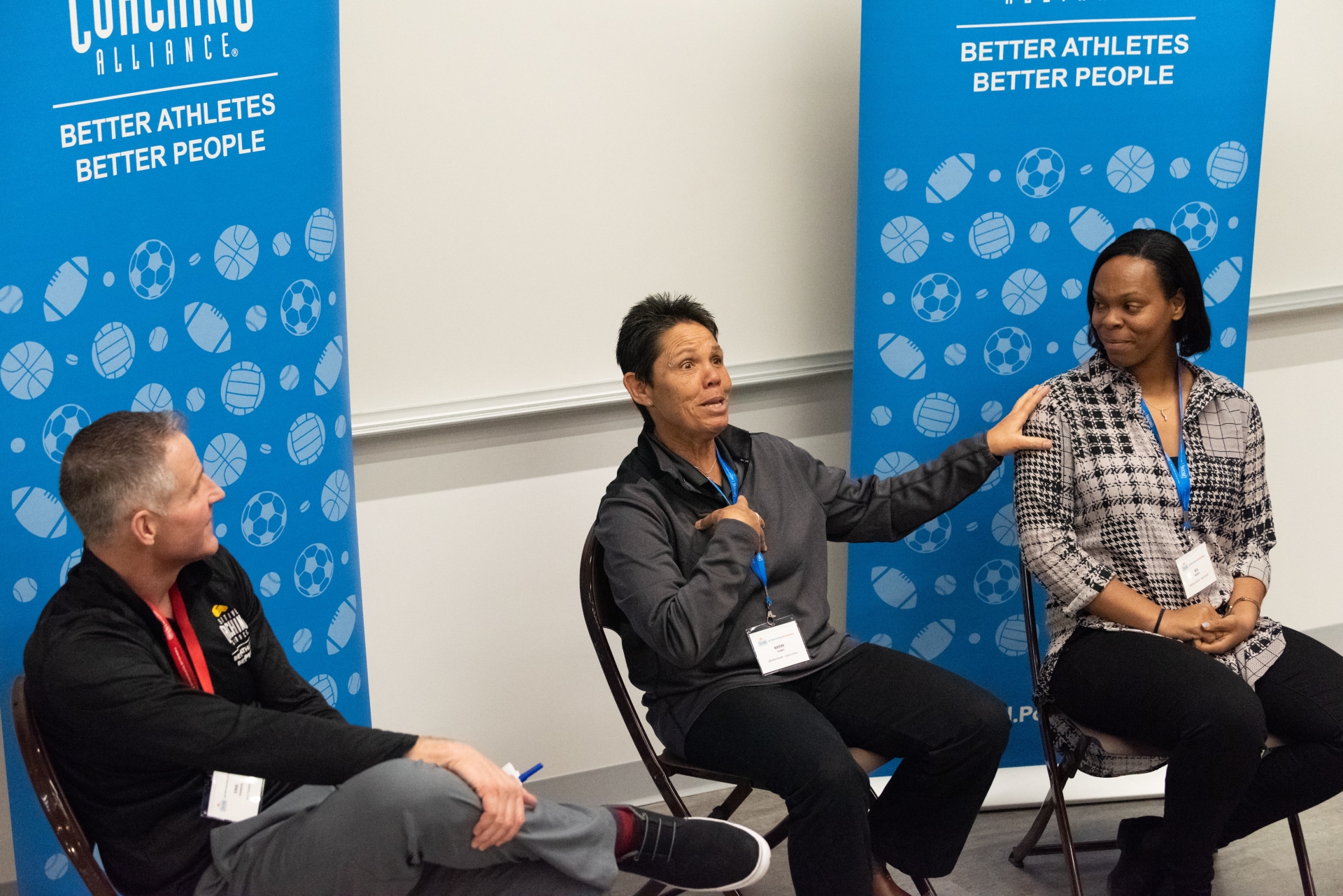 Erik then led a panel discussion with Kia McNeill, Brown Women’s Soccer Coach, and Kathy Flores, Brown Women’s Rugby Coach. Before Brown, Kia was an All-American, CT Gatorade Player of the Year, member of youth National Teams, a star at Boston College, earned her MBA and played professional soccer. Kathy played two sports in college, played on the inaugural USWNT for rugby, won a World Cup, was inducted into the Hall of Fame, and is an award-winning coach many times over.

A few of the highlights:

Following the coach panel, five Brown student-athletes, Elise Hinkle (rugby), Gus Hershfield (crew), Jack Twomey-Kozak (wrestling), Maesyn G’bye and Sarah Bermudez (soccer), joined the gathering and responded to questions from Brown’s Kerri Heffernan, Director, Global Sport Leadership Initiative, and from the audience. The Brown student-athletes poignantly shared their experiences transitioning from top high school athletes to new roles on their college teams, the advice they would give their younger selves, and what they appreciated about their high school coaches. 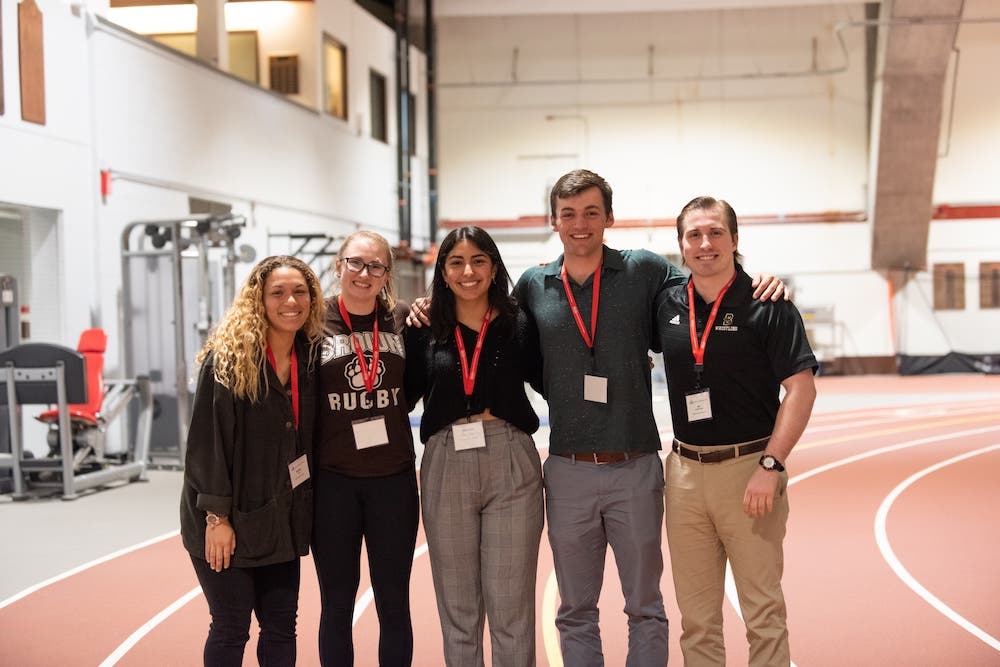 “Don’t be afraid to make mistakes”

“Enjoy the process more, don’t be in a rush to figure out where you will land”

What Brown student-athletes’ appreciated from their high school coaches:

“Letting me know that they believe in me”

“Telling me to focus on what I am good at first”

“Telling me not to be afraid of making a mistake”

“Making the team a family”

“Teaching me that leadership is serving others first”

The message from one athlete, though he spoke for them all, was “Coaches, your impact on us is lifelong. It will stay with us forever.” 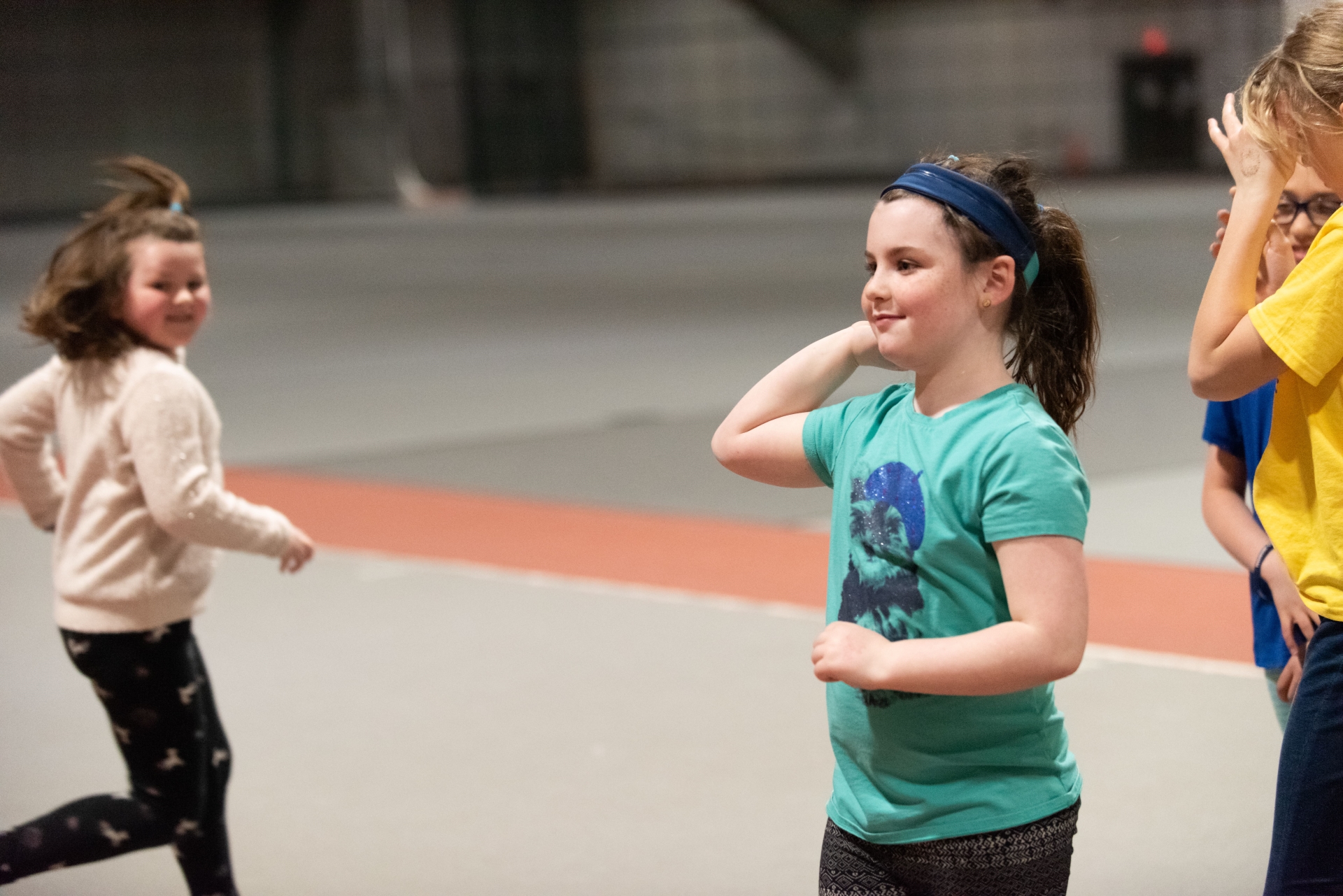 Meanwhile, the youth and high school athletes, ranging in age from 7 to 17, began their afternoon with the panel of Brown student-athletes, and then experienced an active PCA workshop in the fieldhouse. Led by PCA Trainers Julia Beasley, Olympic rower, Rachel Aronis, marathoner and IronMan triathlete, and Chris Fay, former college baseball player. With room to move, and organized by age, they engaged in a variety of team-building exercises highlighting how to be a great teammate and how to brush off mistakes. The young athletes wrapped with a close-up conversation with Erik Johnson and Brown coaches Kia McNeill and Kathy Flores on the leather couches in the football lounge. 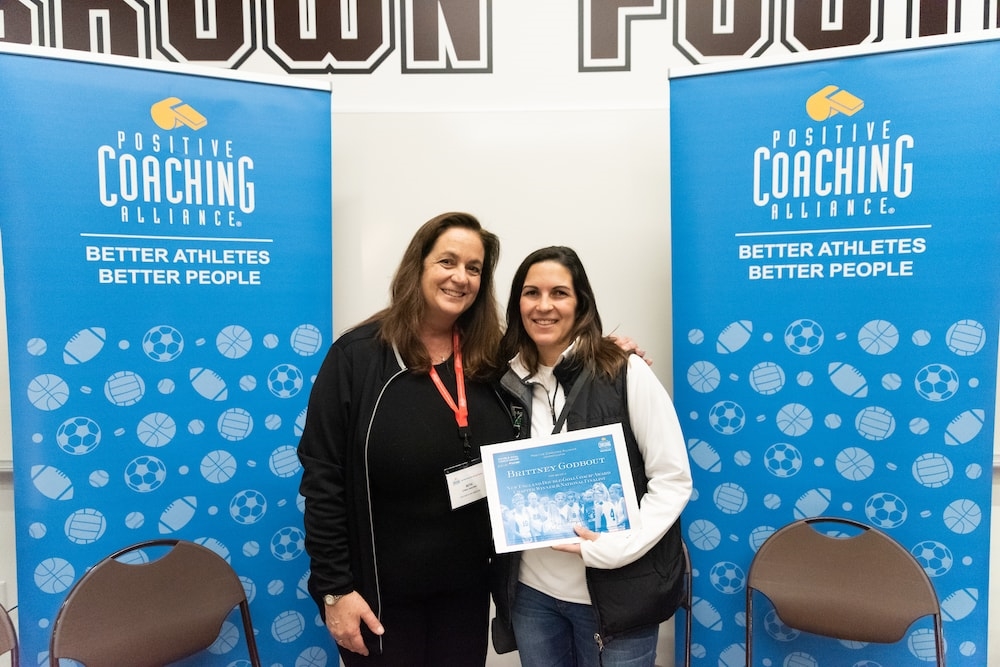 The younger student-athletes joined their parents and coaches in the Sloan Football Meeting Room for PCA’s recognition of Maddie Potts’ Chariho high school soccer and lacrosse coach, Brittney Godbout, a 2019 PCA-NE Double-Goal Coach Award Winner. Brittney led her teams through difficult days after Maddie’s death, and was recognized by PCA because she not only coaches to win, she also coaches to teach life lessons and builds the kind of character—grit, resilience, leadership, teamwork, and more that kids need to thrive on and off the field. In a letter of support for her nomination, one parent said “Brittney shines as a coach every day making her athletes believe in themselves and making her athletes appreciate the power of sport to connect us to one another.”

After a reception with treats supplied by The Pizza Lady of Pawcatuck, CT, Clif bar, and Stop & Shop, the afternoon ended as dusk began to fall. People made their way out into the warm spring evening sharing stories and talking about their “why.”

PCA is grateful to Maddie Potts, the Maddie Potts Foundation, and Brown University for the opportunity to share its mission and to reflect on what athletes, coaches and parents do well, and what we can do better for ourselves, our teams, and the games we love. 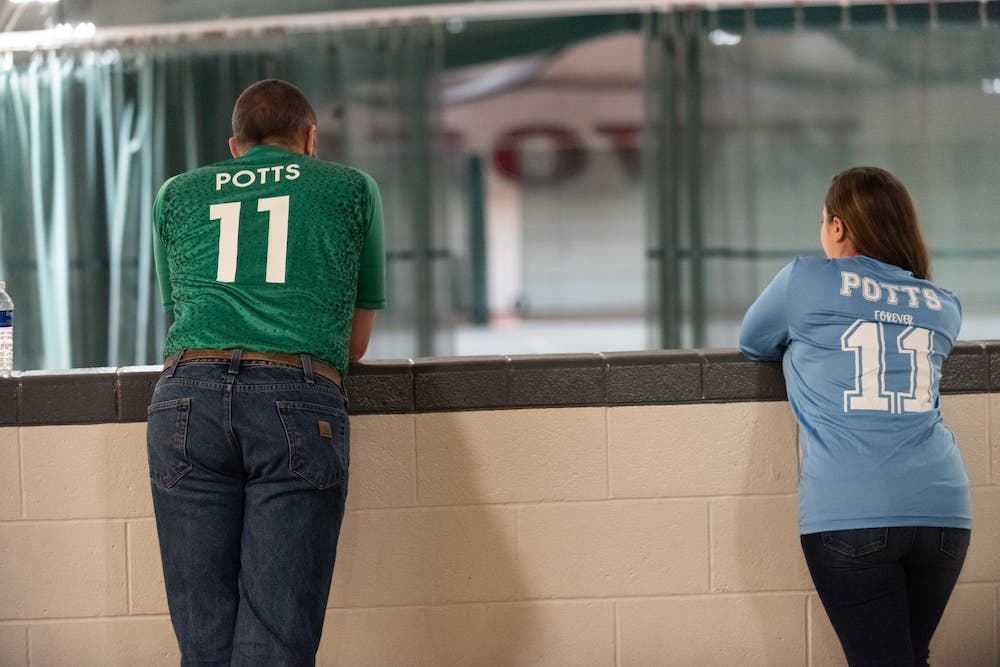