Thank you to Kirkland & Ellis for supporting our first
HUDDLE UP! Event.

Alex Cora paused his game day preparations on a chilly Wednesday in May to share his coaching philosophy, approach to motivating players, thoughts on the differences between the 2018 and 2019 seasons, and the need for balance in sports and in life with Positive Coaching Alliance supporters, partners, board members, and staff.

This conversation was the first of a series of PCA’s HUDDLE UP! conversations with Boston’s beloved sports leaders presented by the law firm of Kirkland & Ellis. 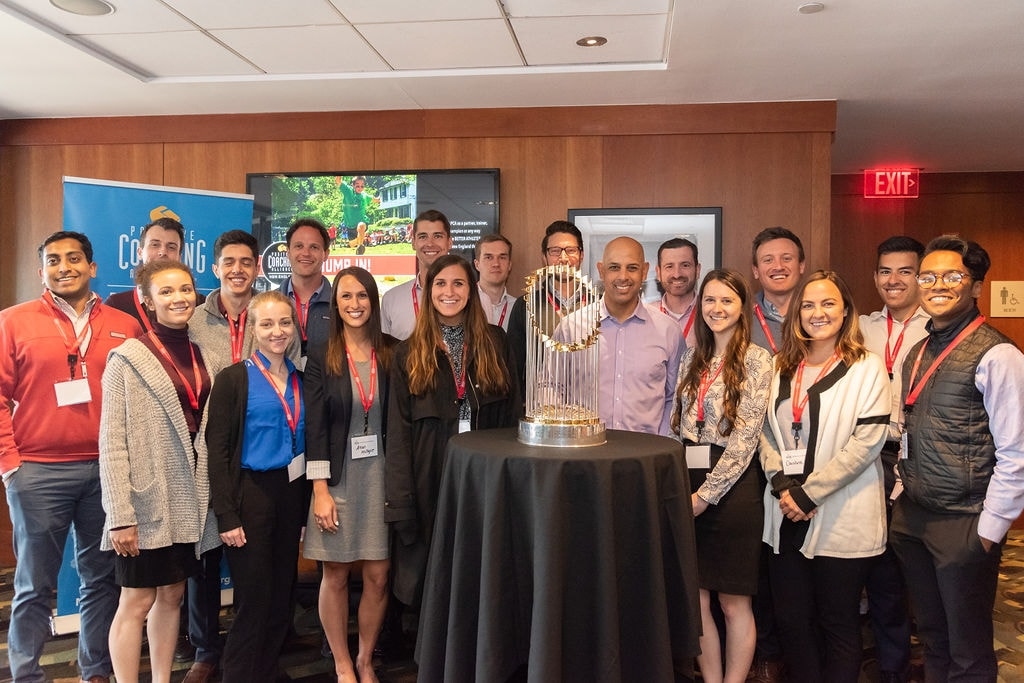 Alex Cora with Kirkland & Ellis and the World Series Trophy.

In Fenway’s Dell/EMC Club, ninety-eight people enjoyed a quiet Fenway Park, a delicious sandwich buffet, and the opportunity to hear from the manager of the reigning World Champion Red Sox. The huddle began with a welcome from PCA-New England’s Executive Director, Beth O’Neill Maloney, who talked about how #CoachesMatter, how the Red Sox exemplify PCA principles (see sidebar), and how Alex Cora’s success in 2018 was built upon his inclusive, honest, innovative approach to managing the team built on his unwavering belief in the members of the team. Maloney focused on a quote from Eduardo Nunez who said that Cora “made me feel better than I am” and encouraged coaches of young athletes to recognize their power because when a coach communicates that they believe in their players, even more than their players believe in themselves, that builds players’ confidence. 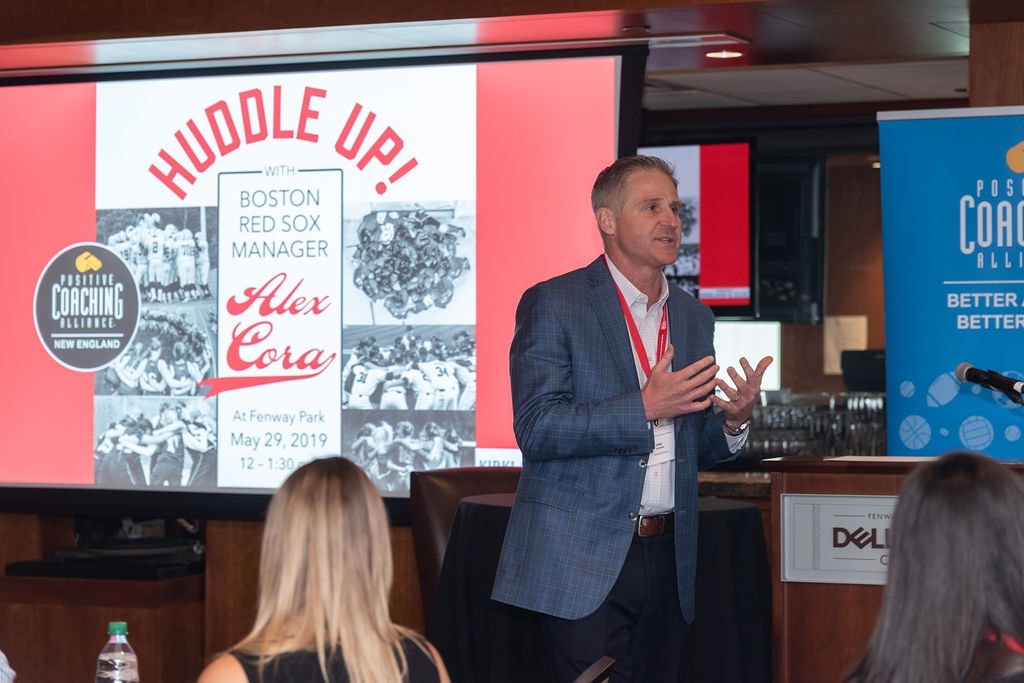 Next up was Erik Johnson, PCA Trainer, former Boston College Women’s Basketball Coach, and Managing Director of the Bulfinch Group. Johnson gave the audience a slice of a PCA coach workshop demonstrating how a PCA-trained coach brings out the best in their players with positivity. Instead of criticizing a young athlete after a mistake, Erik modeled ways coaches can communicate that they believe the young athlete can do better, giving the young athlete both the correction and the confidence they need to be better. 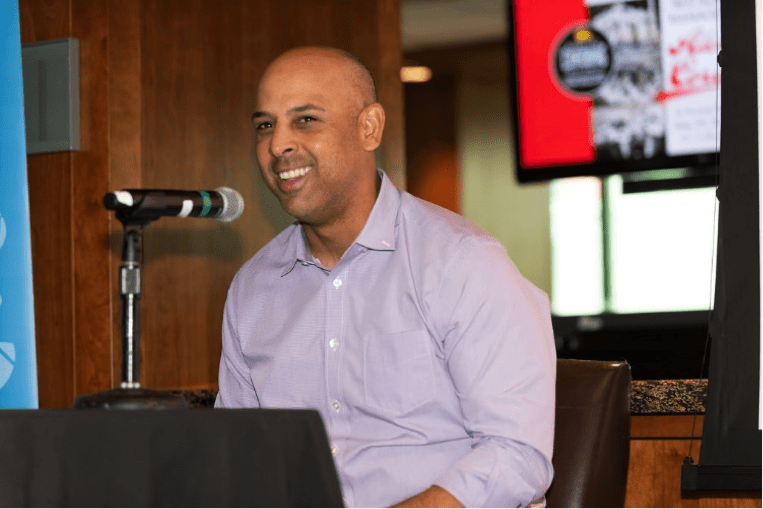 Third in the order was Alex Cora. Introduced with the Red Sox “Wall of Wins” video from 2018, Cora remarked that he was seeing the video for the first time in three months, and that the video helped bring him back to that time. In response to questions from WBZ-TV/CBS Boston’s Dan Roche, Cora reflected that while last year’s road to the World Championship was an almost Disney-like experience, this year’s road, after a slower start, would almost mean more because it would be achieved by the team grinding it out.

The first question for Alex Cora was about the two planeloads of supplies he arranged to bring to Puerto Rico. Cora described himself as feeling “useless” after Hurricane Maria devastated Puerto Rico, until he signed with the Red Sox as manager, and asked for a planeload of supplies. When the Red Sox won the 2018 World Series, Cora asked to go back with another planeload, plus the trophy. Through the conversation, it became clear that Cora, who describes his coaching style as demanding and relaxing, had so many lessons which would be invaluable to anyone who coaches young athletes.

New Balance’s Joe VanBuskirk, a PCA Board Member, presented Alex Cora, a member of the New Balance family of athletes, with a New Balance pullover with the PCA logo on the sleeve, in appreciation for his genuine caring and commitment to the people of Puerto Rico, and sports done right. 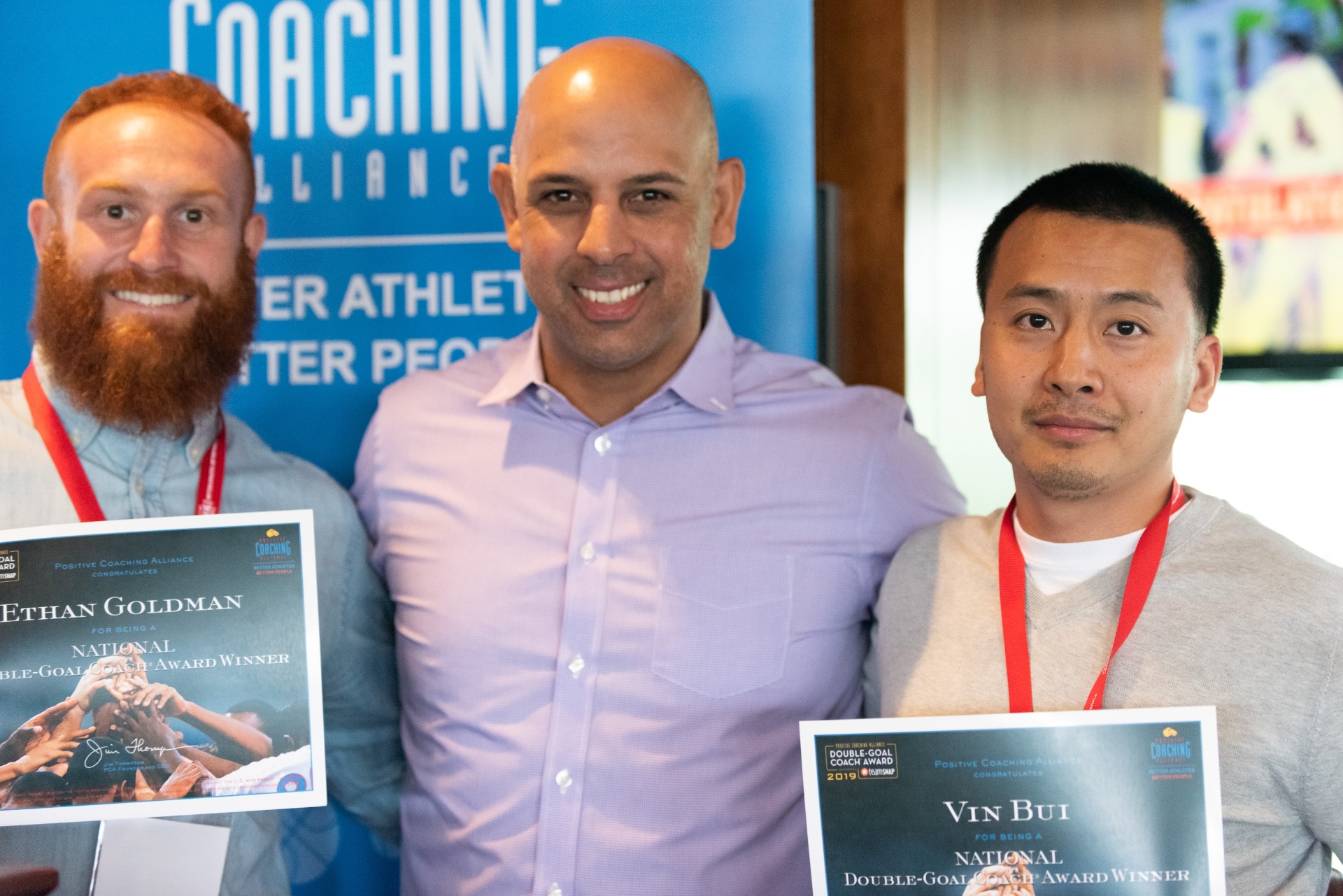 Positive Coaching Alliance recognized two New England coaches, basketball coach Vinh Bui of Shooting Touch and New Mission High School and soccer coach Ethan Goldman of Boston SCORES, who are among just 50 coaches selected from among thousands nationwide as PCA National Double-Goal® coaches for their exceptional commitment to and care for the young athletes they coach. 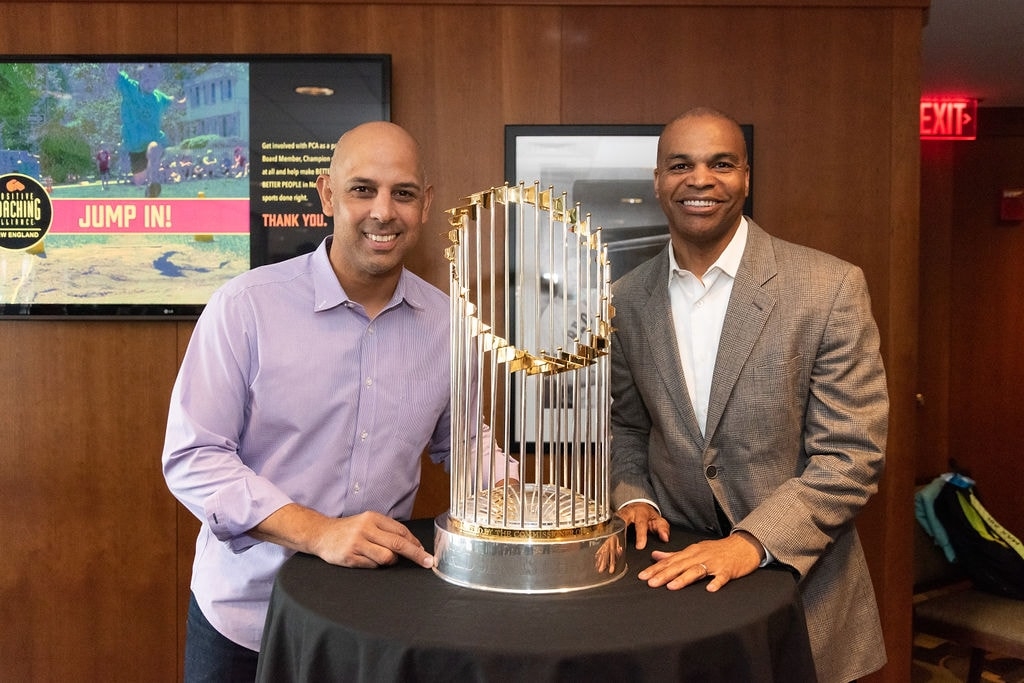 Caring can lead to championships. 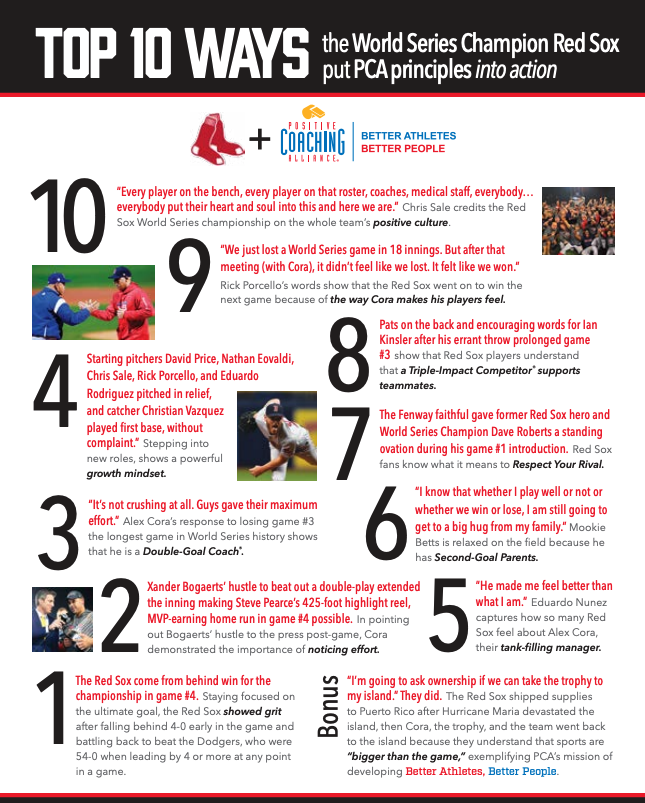