Cory is an experienced and accomplished Senior Executive with over 20 years of progressive leadership experience.  Prior to serving as Chief Financial Officer, and subsequently Chief Commercial Officer, at a nationwide trailer leasing company. Cory spent 15-years in Investment Banking with several Wall Street firms.  Cory credits competitive hockey, and the positive coaching he received along the way, for much of his success.  Cory has a passion for helping individuals, teams and businesses grow and perform at their highest level.

Cory is a native Canadian and grew up in Shawville, a small town in western Quebec.  Cory received his Bachelor of Arts Degree from Hamilton College, a private liberal arts college in Clinton, NY, where he was a four-year letter winner in hockey.  While at Hamilton, he was a member of the 1997-98 ECAC East Championship team, elected team captain his senior year, and graduated with honors.  Prior to Hamilton, Cory played Junior A hockey for the Pembroke Lumber Kings, part of the Central Canada Hockey League, formerly the Central Junior Hockey League.  Currently, Cory is a volunteer coach for the Allen Jr. Americans Youth Hockey Program and a devoted hockey Dad.

Cory and his wife, Jessica, have two sons, Keaton and Callan.  In addition to spending time with his family, Cory enjoys playing hockey, coaching hockey, CrossFit training and reading.

Photo: Keaton, Cory, and Callan Dorzek after a parent/child skate. 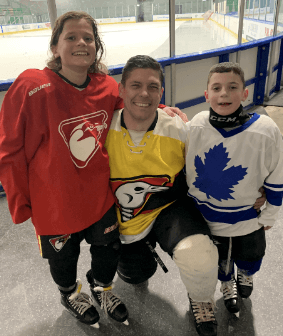