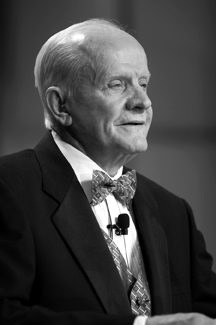 PCA’s Lifetime Achievement Award is named for Ron Jensen, who amassed a lifetime of achievement in business and philanthropy.

Ron, a highly successful entrepreneur, started multiple companies including UICI, a diversified financial services company. He was also a venture capitalist with investments in a variety of industries.

A favorite saying was “from success to significance,” which he embodied as he got deeply involved with philanthropy and social entrepreneurship. He took particular interest in getting entrepreneurs to give more of their wealth to worthy causes. Ron got great satisfaction from his giving, and wanted others to make the journey from success to significance.

Ron and his family, through their foundation, The Jenesis Group, were major supporters of Ashoka: Innovators for the Public, which supports social entrepreneurs with the potential to change society.

PCA and Ron were introduced in November 2004 in Houston where PCA Founder Jim Thompson was inducted as an Ashoka Fellow. Ron took an immediate interest in PCA because of his interest in young people: “In God’s time, we’re not here long. You’ve got to go generational to have an impact.”

Ron appreciated the value a strong sales staff brings to an organization. He loved that PCA was a nonprofit with people “selling” its program in the field. He admired PCA’s record of increasing “earned income” from our partnerships with schools and youth sports organizations.

Although busy with his varied interests, Ron advised PCA on how to duplicate its success in Northern California in other parts of the U.S. He and Jim Thompson were in frequent contact to discuss ideas until Ron passed away from an automobile accident in September 2005.