No cost to enter- we simply ask that players complete a Triple-Impact Competitor® Scholarship Application to be eligible for participation. 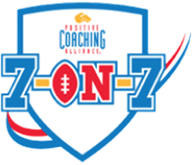 This 7-on-7 tournament is unique in that public, private and charter schools get a chance to compete with one another. Besides the great football and top-notch competition, prior to the tournament we talk to the student-athletes about Honoring the Game and respecting their opponents and the officials.